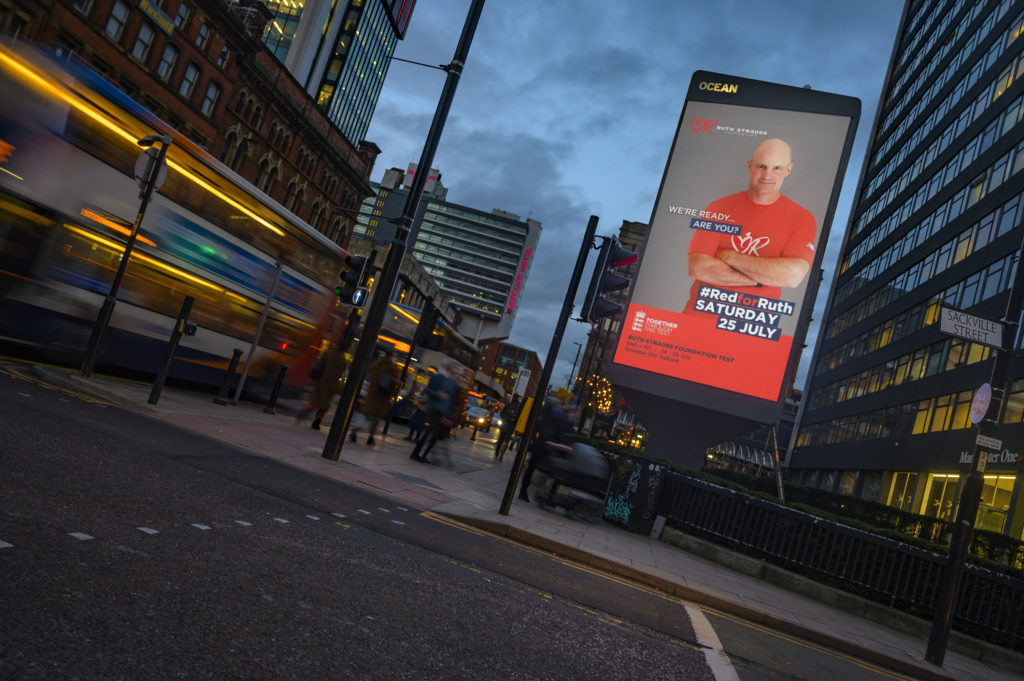 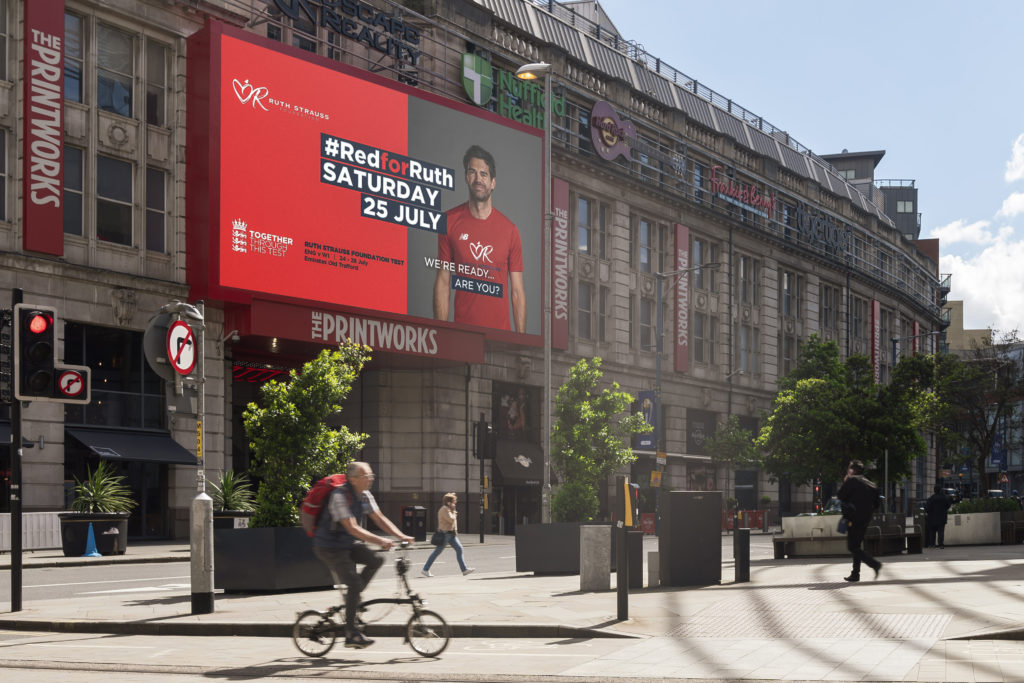 Cricket goes #RedforRuth on Saturday, July 25 to help support families facing the death of a parent to cancer through the work of the Ruth Strauss Foundation.

To mark the occasion, Ocean will turn all of its digital out of home screens across Manchester red during a 60-minute take-over at 10am just before play begins at Emirates Old Trafford.

Using social media, the Ruth Strauss Foundation is offering supporters who tag #RedforRuth the chance to be selected and featured alongside celebrities on outdoor screens.

The Third Test of the #raisethebat Test Series versus the West Indies is called The Ruth Strauss Foundation Test.

Funds raised will go towards the Ruth Strauss Foundation’s mission of providing pre-bereavement support for families facing the death of a parent from cancer, and drive much-needed research into non-smoking lung cancers.

During the day, Sky Sports, BBC Test Match Special and the in-ground screens will show pictures of the fans and clubs who show their best #RedforRuth efforts. Items available in an online auction, including limited edition Ben Stokes signed pictures of his famous innings from last summer, as well as celebrity chef Tom Kerridge cooking dinner for six.

This is the second year cricket turns #RedforRuth. Last year, 28,500 spectators supported the charity at Lord’s during the second Ashes Test to help raise more than £550,000.

The Foundation was founded by former England captain Sir Andrew Strauss in memory of his wife. He said: “Last year I was humbled and honoured by the support of the wider cricket family. We sincerely hope that the incredible display of generosity and community spirit will continue as we look to turn cricket Red for Ruth for a second year to support the Ruth Strauss Foundation.

“The day will look very different to last year, but we are very grateful to the ECB and Lancashire Cricket Club for their assistance in making this happen during what has been a difficult period for everyone.”

Tom Harrison, ECB chief executive officer, added: “It’s our privilege to name the third test in honour of the Ruth Strauss Foundation and to support Red For Ruth Day for a second year running. It’s a cause many of us at the ECB feel very passionately about. I hope that once again we can show how cricket can come together to raise funds to help families going through the toughest of times.”

Joe Root, England men’s Test Captain said: “Andrew is a true legend of our sport and it is almost impossible to imagine what he and his family went through. Cricket plays a massive part in so many lives and together we can help other families facing these same devastating circumstances. I ask all of our fans across England and Wales to turn red on the day and support this incredible charity.”

The Ruth Strauss Foundation Test is one of several initiatives being highlighted during the #raisethebat Test Series. The series will shine a light on key workers, help to connect communities around the UK and support those in need.

In early 2018, Ruth Strauss was diagnosed with an incurable lung cancer that affects non-smokers. Ruth died on December 29 2018, aged 46. Unfortunately, the Strauss family are far from alone in their experience with around 41,000 children in the UK under the age of 18 facing the death of a parent each year: the equivalent of 112 every day.

In her memory, Sir Andrew launched the Ruth Strauss Foundation to provide professional emotional support for families to prepare for the death of a parent from cancer and drive the need for more research and collaboration in the fight against non-smoking lung cancers.

To find out more about the Foundation and to donate please visit ruthstraussfoundation.com