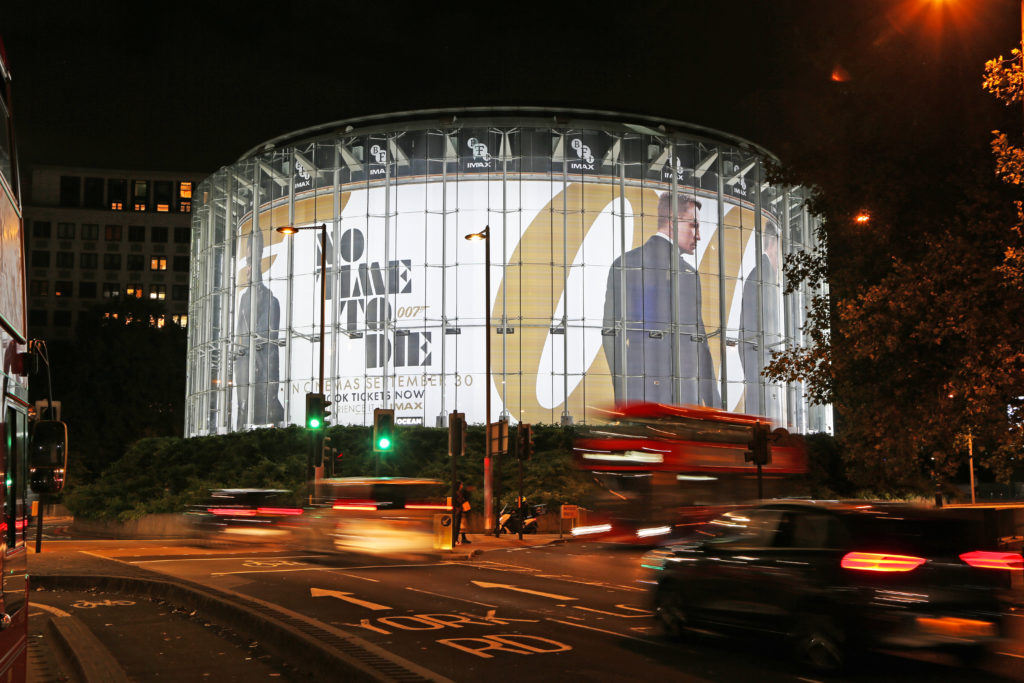 Looking great from all angles on the BFI's IMAX Download 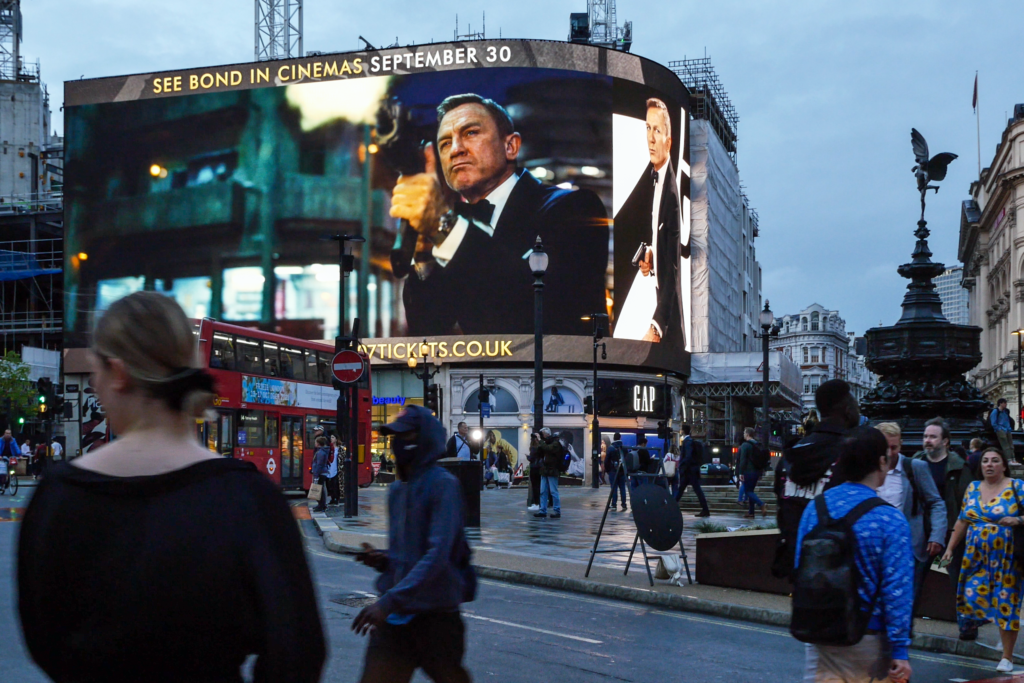 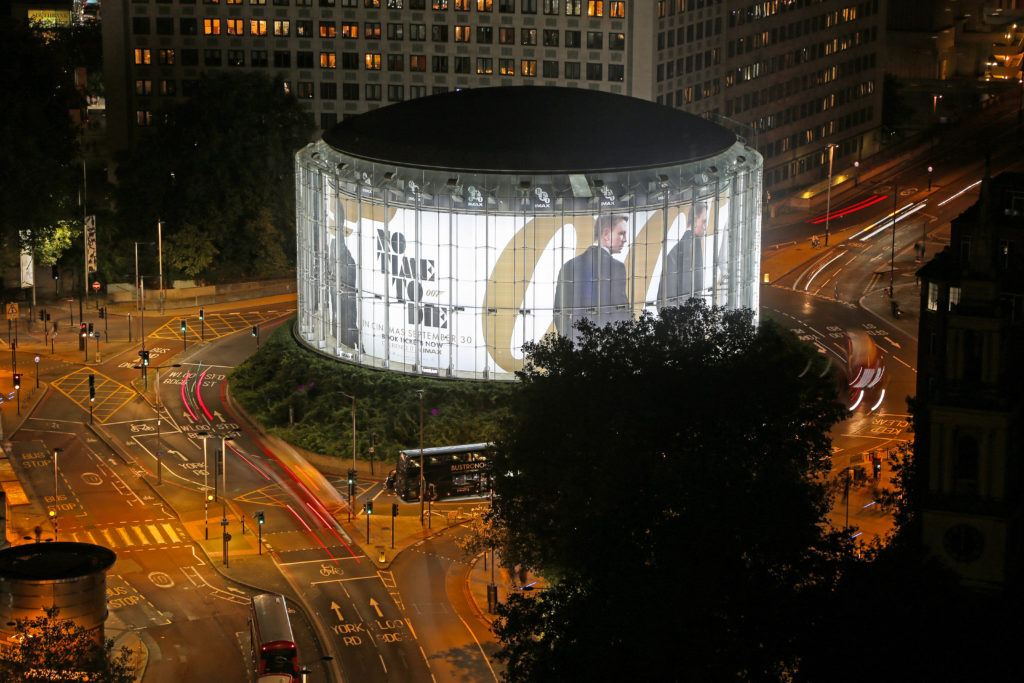 The Bond creative targets pedestrians and motorists around the IMAX Download 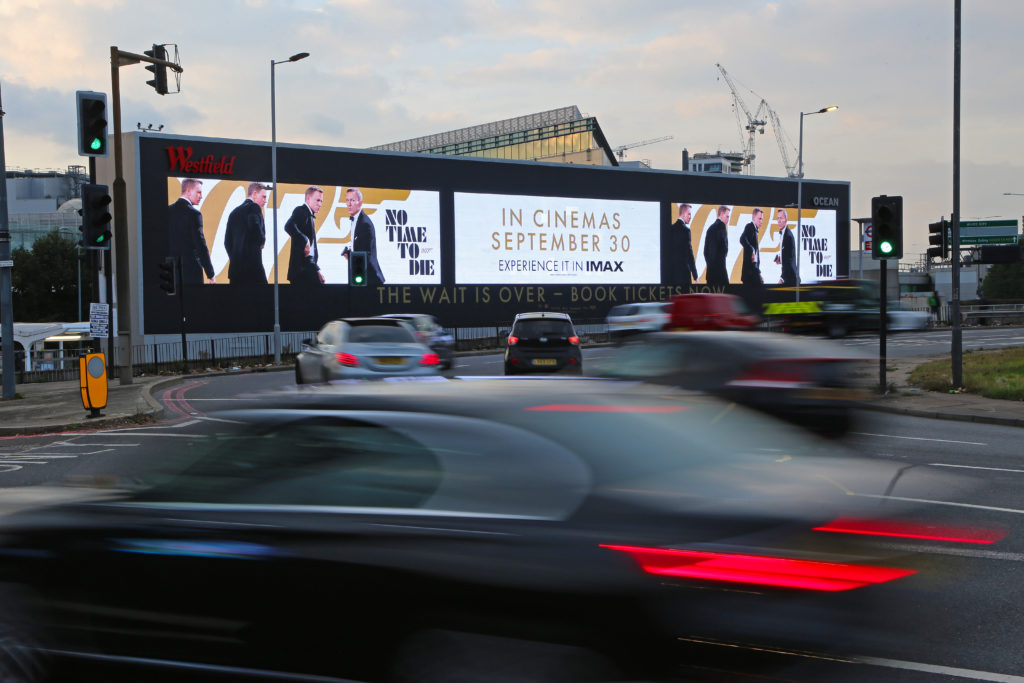 No Time To Die on Holland Park Roundabout, outside Westfield London Download

After a lengthy intermission, movies are back, with postponed films pre-Covid finally making their way on to the big screen. And one of the most hotly-anticipated movies of 2021 is James Bond in his latest outing in No Time To Die – the 25th film in the spy franchise.

Released to huge fanfare last week – in part whipped up by a huge OOH campaign and corresponding PR – No Time to Die achieved its biggest UK box office opening weekend to date. Raking in a whopping £25.9m, it easily beat the mighty Skyfall’s first weekend’s takings (£20.2m) back in 2012. In fact, No Time To Die scored a huge £88.8m ($121m) in its international debut.

And the incredible Bond effect also had a direct impact on Westfield’s weekend footfall numbers: With Westfield London and Westfield Stratford City both home to the UK’s busiest and second busiest Vue cinemas respectively, new numbers show last weekend (2nd October) was Westfield’s busiest since 2019 – demonstrating the incredible allure of the inimitable 007.

In the highly-competitive film category, the challenge for studios has always been to drive cut-through and subsequent ticket sales. And with the battering the movie industry took during the pandemic – not to mention the huge backlog in films still to be released – it’s never been more paramount for studios, distributers and cinemas to generate maximum profits.

One of the best tried and tested ways to whet audiences’ appetites is through the humble trailer. And at Ocean, we’ve noticed a rising demand for DOOH when it comes to promoting films and trailers. Advertisers have discovered the incredible priming effect and media synergy of leveraging DOOH – and in particular Ocean’s huge, cutting-edge digital screens – with big screen content.

Bond was last seen on the world-renowned Piccadilly Lights in December 2019 when the No Time To Die trailer launched exclusively on the iconic digital billboard in a world media first. Now he’s back on the Lights, with the impactful creative also being hosted on the BFI’s IMAX and on Ocean DOOH screens around the country, including The Two Towers Manchester and Holland Park Roundabout. The campaign was planned and bought by Mediacom and Kinetic.

Ocean’s city-based, large-format, full-motion DOOH networks, including DeepScreen™, The Grid and Ocean In Motion – not to mention Landsec’s iconic Piccadilly Lights and BFI’s IMAX – are the perfect media to showcase upcoming cinematic gems.

Watch our latest, jaw-dropping activations for No Time To Die across OOH and DOOH landmarks in London, plus some of our previous Bond campaigns.