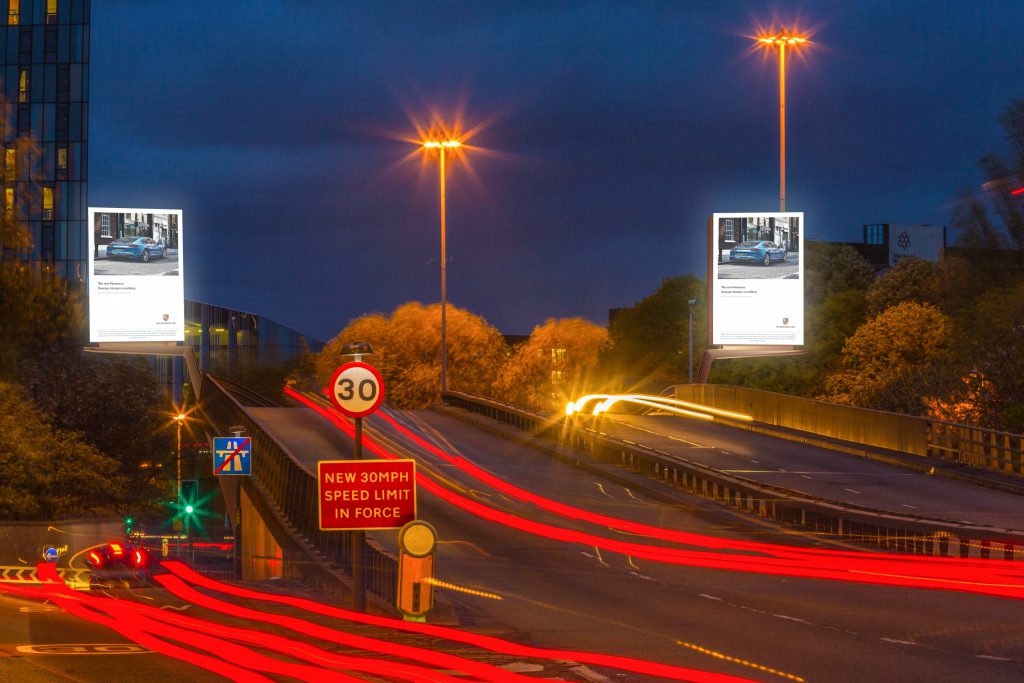 Anyone in this neck of the woods can’t fail to notice the huge amount of regeneration going on in Manchester City Centre right now.

Scan the Manchester Evening News and the scale of redevelopment is more than apparent, captured in pictures, plans and artists’ impressions of thousands of new apartments, a dozen skyscrapers, hotels, shops, cultural spaces and new parks.

Add to that list The Two Towers® Manchester, the City’s first double-sided advertising towers which will grace the elevated section of the A57 Mancunian Way from March 2018.

These two portrait orientated screens will capture access in both directions to the busiest inner city motorway route in Manchester, making The Two Towers® Manchester’s number one large digital out of home display in terms of audience reach, delivering 3.6 million impacts a fortnight.

Modern, simplistic and beautifully geometric in architectural design, The Two Towers® Manchester will dominate an exclusive and uncluttered stretch of the arterial motorway; there are no other roadside displays within half a mile of this location.

The Two Towers® is a proven roadside concept. First developed by Ocean in London and dominating the gateway to the City’s financial district since 2011, The Two Towers® East, command an audience of more than seven million a fortnight; a high performance East London space for car brands, sports, fashion and luxury goods who use the Towers to superb effect.

The Two Towers® Manchester promises the same, with its audience of high spending drivers with a penchant for fashion, luxury goods – and football. Seventy-one per cent of drivers on Mancunian Way register as ABC1s aged 34 and over. Imagine serving content to them on a Manchester Derby day when the carriageways are at a standstill, pre and post-match.

Yes, other large format digital screens are available. 34 to be precise. But many of them are not within the perimeter of the city centre like Ocean’s are. We currently operate 11 handpicked premium displays and that number will grow to 14 in 2018 when the Two Towers are switched on.

Add to that 40 wifi enabled full motion small format screens that make up our city centre Loop network and Ocean will soon be offering advertisers a combined city centre audience of 19.4 million.

The power and impact of digital out of home is proven. Ocean recently conducted its third neuroscience research study in Manchester, the findings proving that DOOH delivers an experience that appropriates the traditional brand-building role of television and can amplify the impact of online advertising.

You can read more about that study here.

Over the past seven years, out of home advertising in Manchester has taken giant leaps, static posters, old street furniture and outdated processes giving way to dynamic full motion, better locations, improved technology and modern screen design suitable for a smart city which is really on the move.