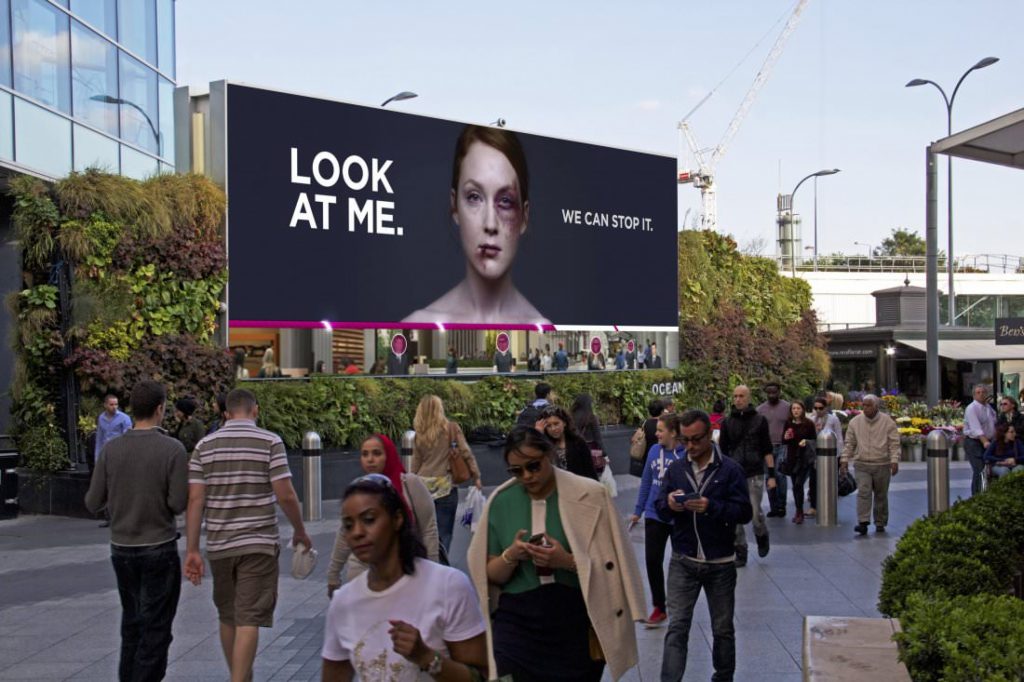 Look At Me, the astonishing Women’s Aid digital out of home campaign, one of the winners of Ocean’s 2014 Art of Outdoor competition, has been awarded two coveted Cannes Lions.

Created by WCRS, Look At Me won the Gold Lion in Outdoor and a Silver Lion in the Cyber category. It is the second Ocean competition winner to collect a Gold Lion.

Pennies for Life, another charity campaign by DLKW Lowe won a Gold Cannes Lions in Mobile in 2013. And British Airways was also shortlisted for an interactive out of home broadcast live from the Caribbean five years ago.

Commenting on the win, Ocean marketing director Richard Malton said: “Ocean’s competition has educated and inspired our industry and helped deliver the success story of digital out of home so far.

“It has always been our ethos to stimulate understanding and exploitation of the medium to the best possible effect. Look At Me is exemplary and a worthy Gold Cannes Lion winner – the greatest prize there is. We congratulate everyone involved.”

WCRS worked with famed photographer Rankin, a long-time supporter of Women’s Aid, Ocean and posthouse Smoke and Mirrors to create Look At Me, interactive billboards which showed the image of a bruised woman with the simple imperative, “Look at me”.

The collaboration was a world first because this was the first time the attention of people looking directly at the digital screens triggered an immediate change in the creative.

Timed to coincide with International Women’s Day on Sunday, March 8th, the creative raised awareness of how the domestic violence charity Women’s Aid saves lives and how society can make tangible changes in fight against domestic violence.

Look At Me took the Interactive Award in Ocean’s annual Art of Outdoor competition 2014 for which it was created. Its broadcast across three Ocean screens was amplified across the world, the campaign featuring on TV channels and generating wide media comment and PR.