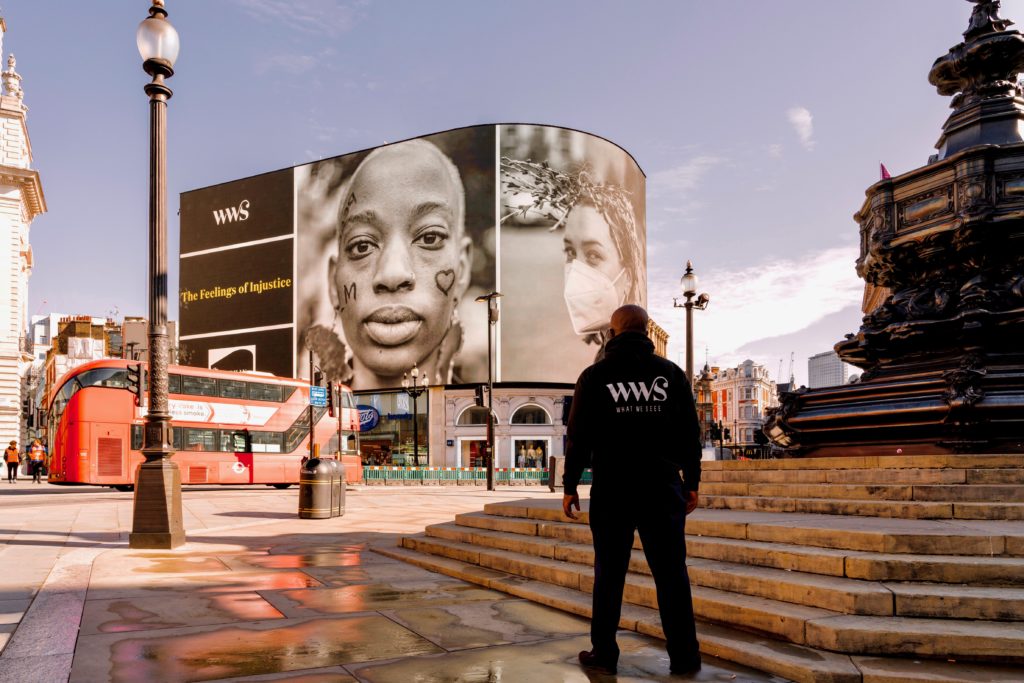 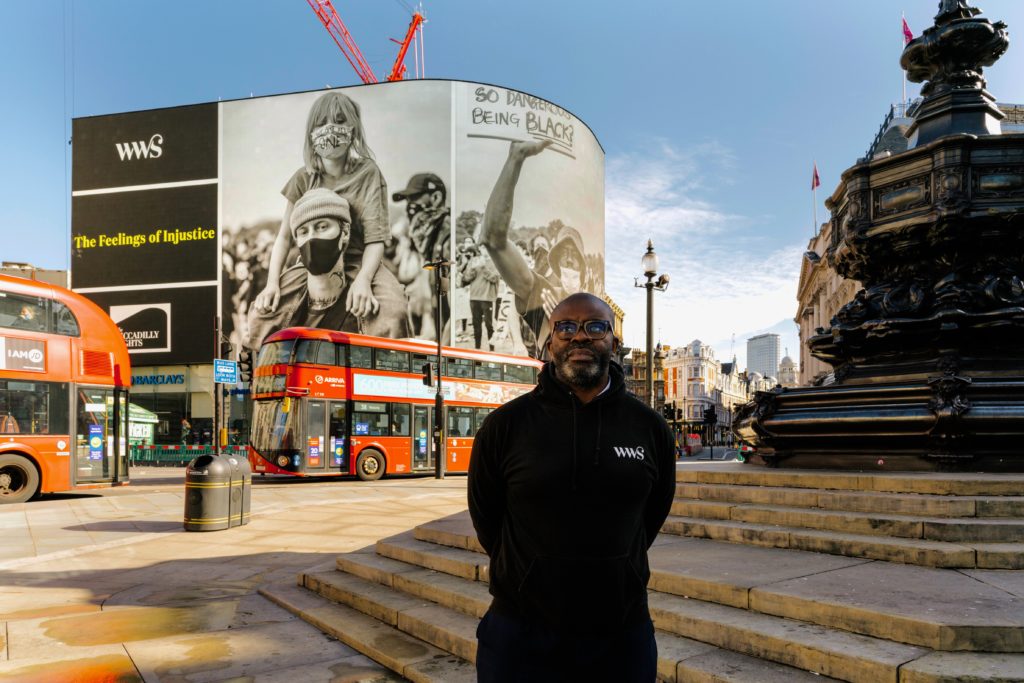 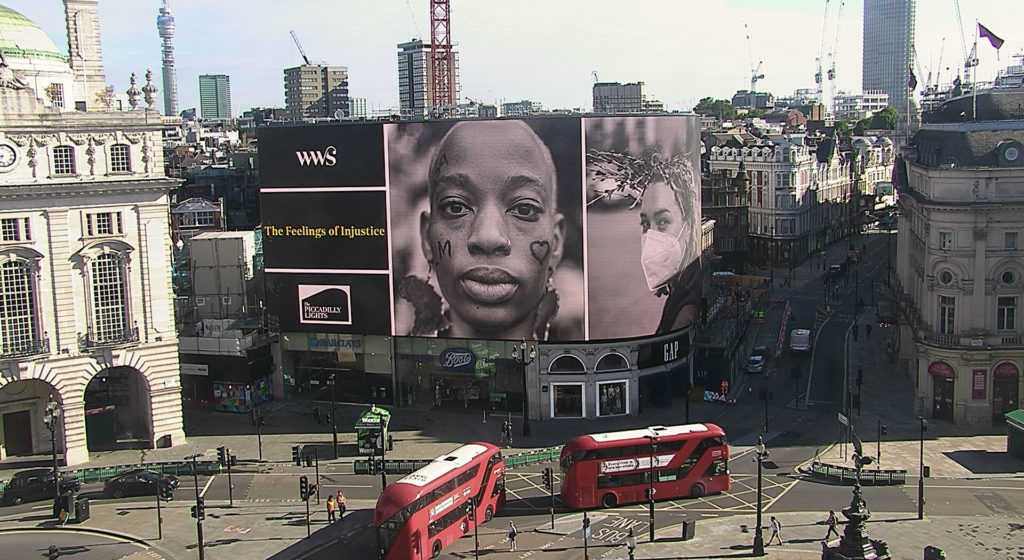 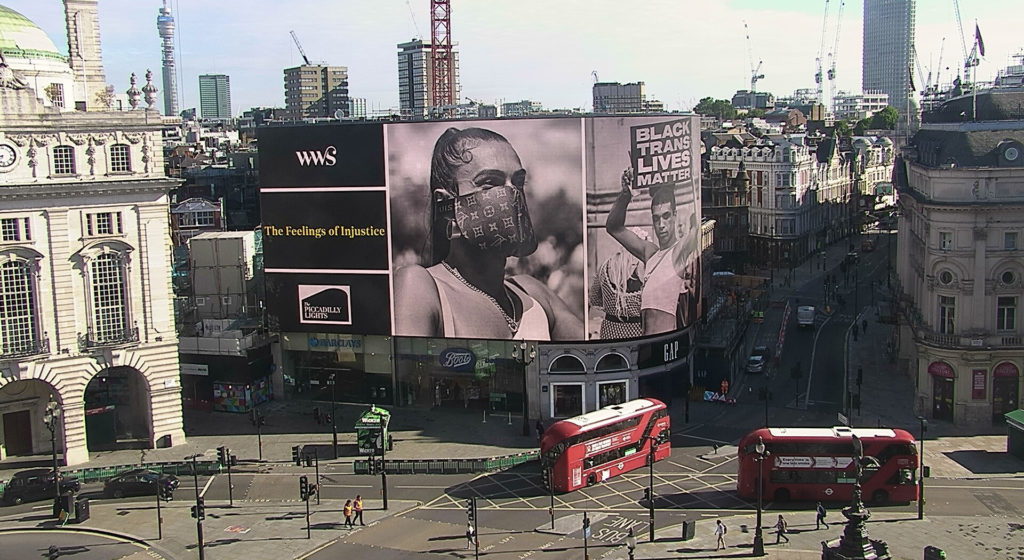 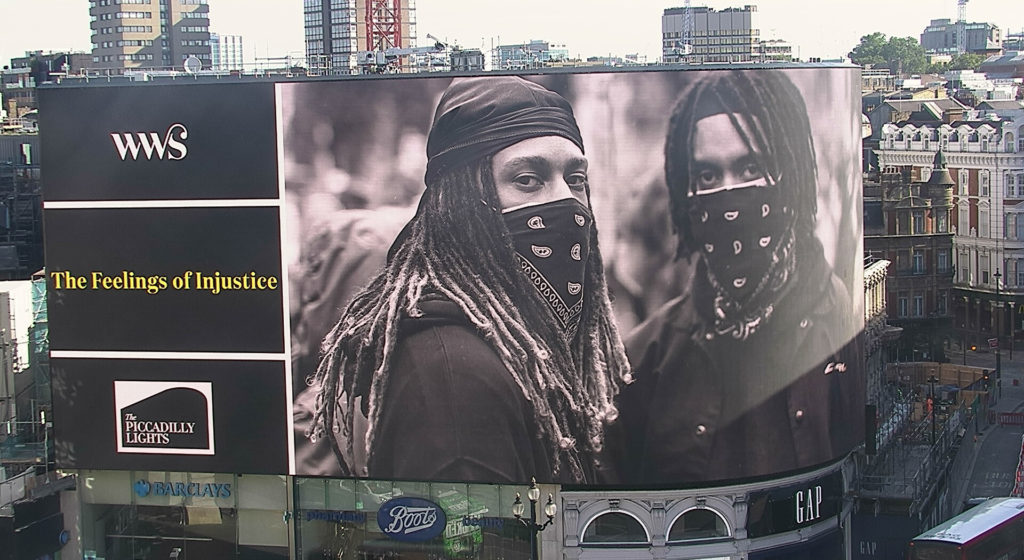 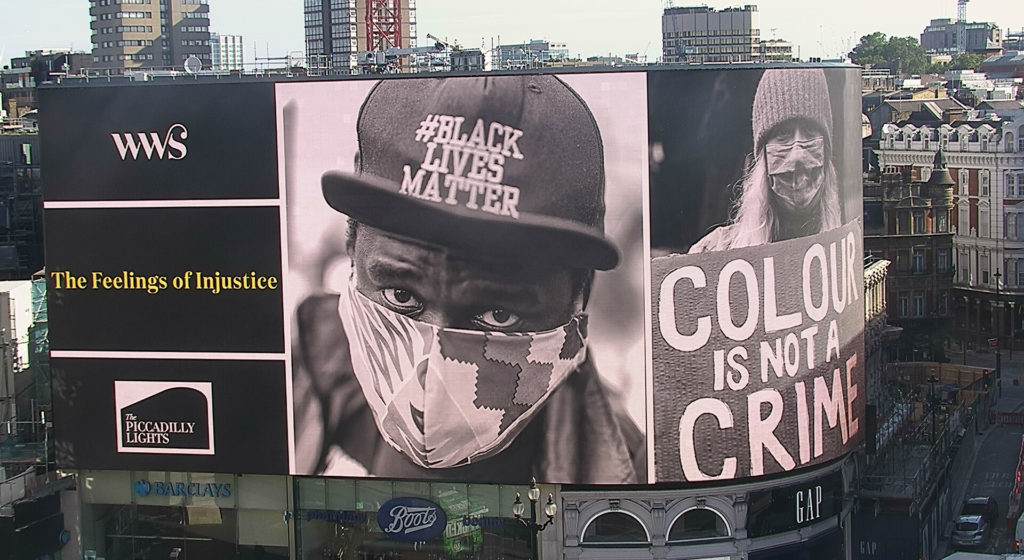 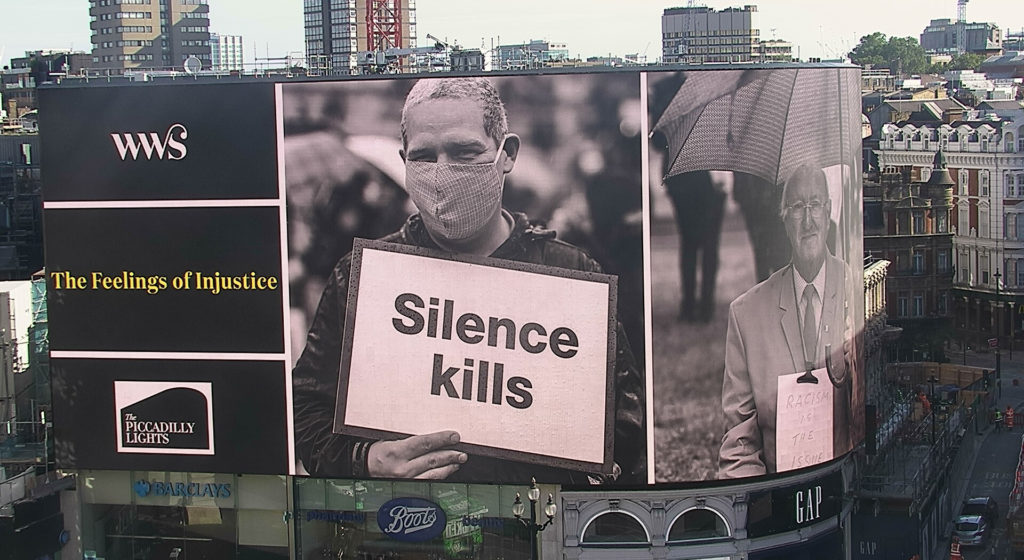 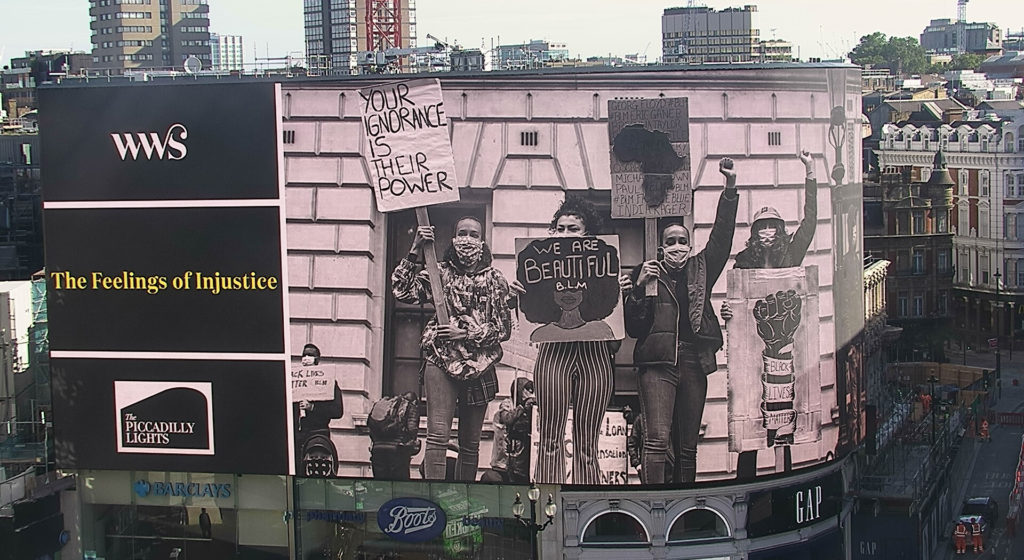 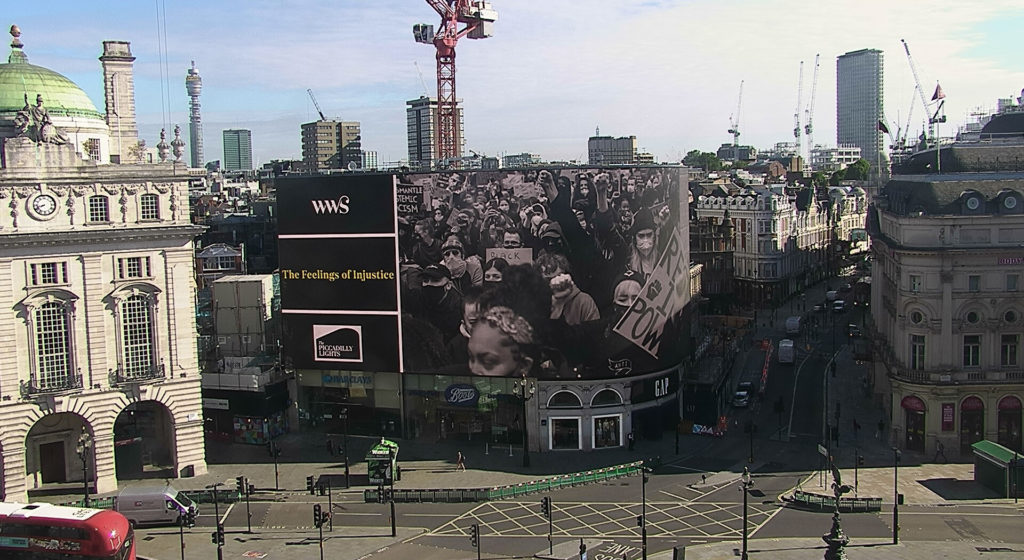 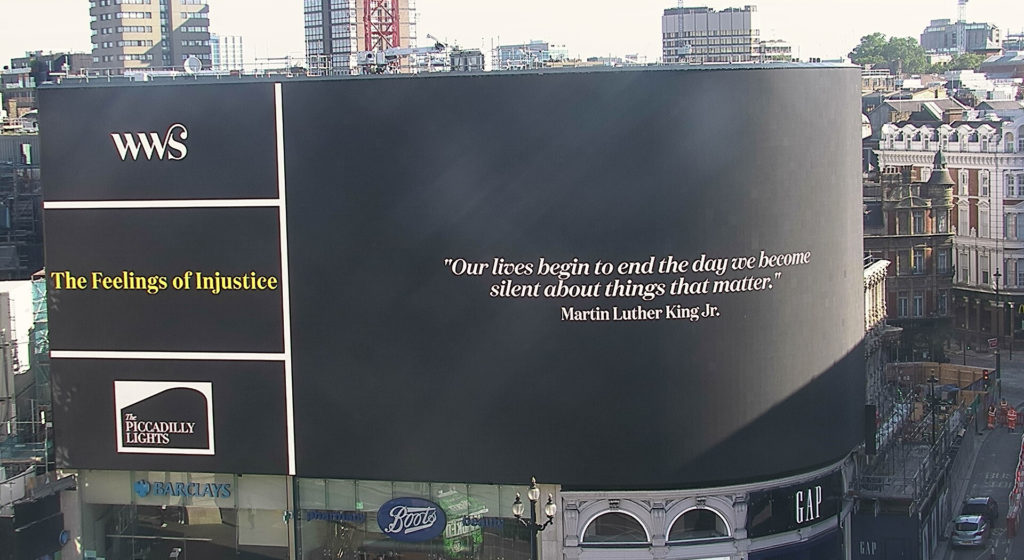 From Tuesday, July 7, the iconic Piccadilly Lights features The Feelings of Injustice, a powerful photographic observation of diverse voices, faces and emotions united by pleas to end systemic racism.

Presented by What We Seee (WWS) in association with Landsec, The Feelings of Injustice showcases powerful photographs captured by WWS founder Misan Harriman at recent Black Lives Matter marches in London, painting a picture of solidarity.

WWS helps people feel the feelings of others: opening minds, and eyes, ears and hearts – and with these photographs sets out to create an enlightening series that transforms how we think about diversity and equality.

The impact, size, location and resolution of Piccadilly Lights is a perfect way to tell the various stories of how people feel during marches for Black Lives Matter and to mark what would have been moments to recognise Black Pride week. With striking and meaningful stories the aim is to encourage dialogue, create greater empathy and understanding.

The showcase began with a 10 minute compilation featuring more than 120 images of people on marches together with famous quotations and Black Lives Matter messages. They include Roger and his daughter Juno; graphic design artist Chris; the dancer and actress Mette Towley; and England Under-21 hockey player Darcy Bourne who carries a sign asking: “Why is ending racism a debate?”

Derek Manns, commercial media manager at Landsec, said: “As the most high-profile, iconic and public media channel, Piccadilly Lights has become the ‘nation’s noticeboard’ supporting culture and community. As custodians of the Lights we’re pleased we can use the Lights as a platform to drive conversation and positive change.”

Highlights from the photographic series will appear on the Piccadilly Lights throughout July and August.

More information about What We Seee can be found here: www.whatwesee.com