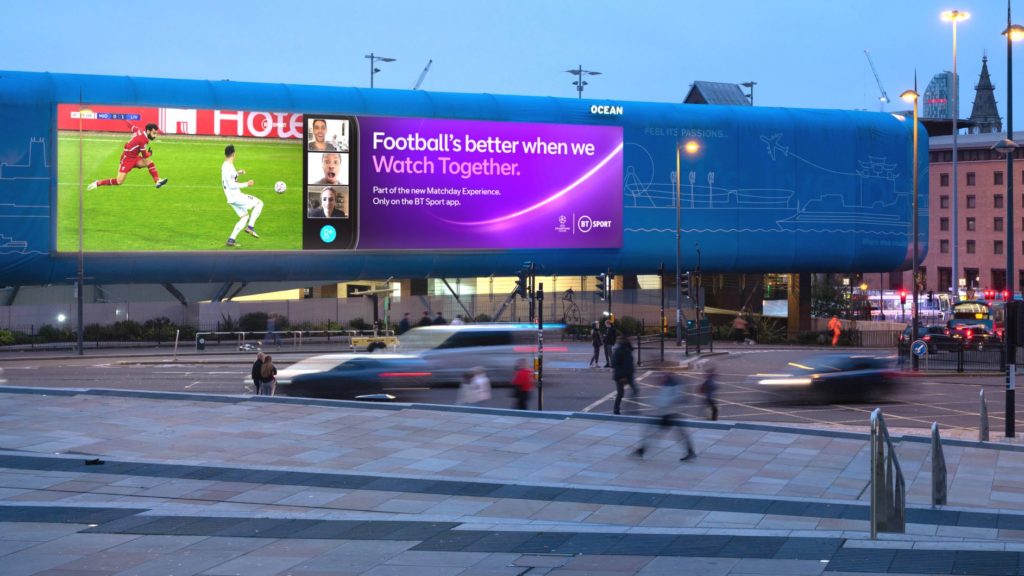 The agreement allows Ocean, partnering with BT Sport, to broadcast next day match clips from UEFA’s Champions League last 16 fixtures through to the Final in May on digital screens.

The partnership begins on Wednesday, February 17 with a collection of 60 second clips featuring Liverpool’s match against RB Leipzig to be carried on 16 advertising screens in seven cities including London, Birmingham, Manchester, Liverpool, Newcastle, Edinburgh and Glasgow.

Ocean’s out of home coverage will continue until May 31 featuring action from Manchester City and Chelsea matches as well as Premier League champions Liverpool.

As part of the DOOH activation, each day-long spotlight will sit alongside a campaign to promote BT Sport’s Watch Together feature, part of the new immersive Matchday Experience customers can enjoy on the BT Sport App.

This is Ocean’s first digital content partnership with BT Sport and the first time match clips from European football will be carried on its large format digital screens as part of a content agreement.

Ed Cracknell, head of marketing, BT Sport said: “It has been fantastic to work with Ocean to create this innovative way to showcase some of the tremendous content and the innovative features on the BT Sport App; allowing fans to come together and get closer to the sport they love.”

Ocean head of content and sponsorship Kevin Henry said: “Primetime TV sport and premium DOOH are natural allies. The extension of BT Sport’s UEFA coverage onto our screens launches a superb summer of sport for Ocean’s large format portfolio, bringing the best championships to even wider audiences over and above the TV and mobile screen.”