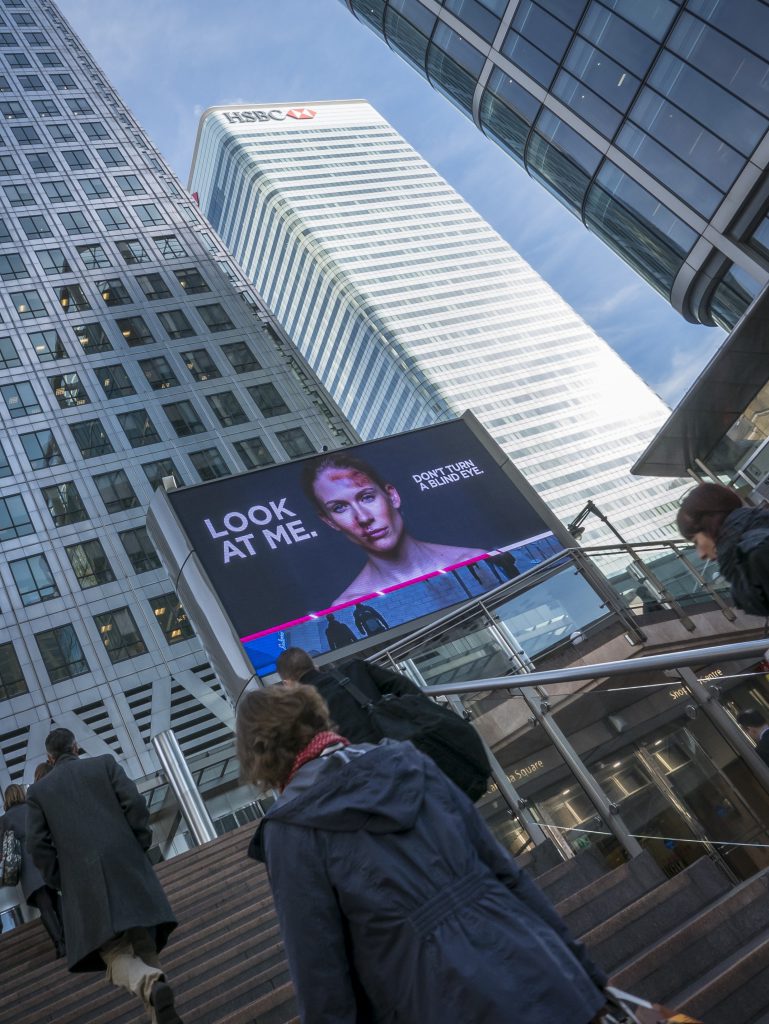 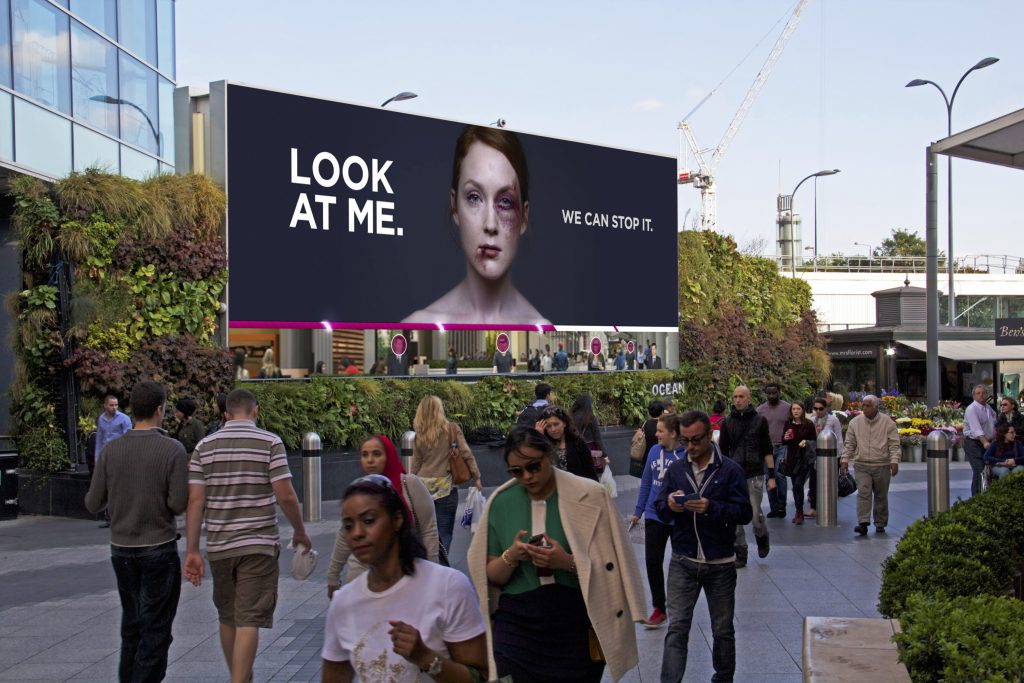 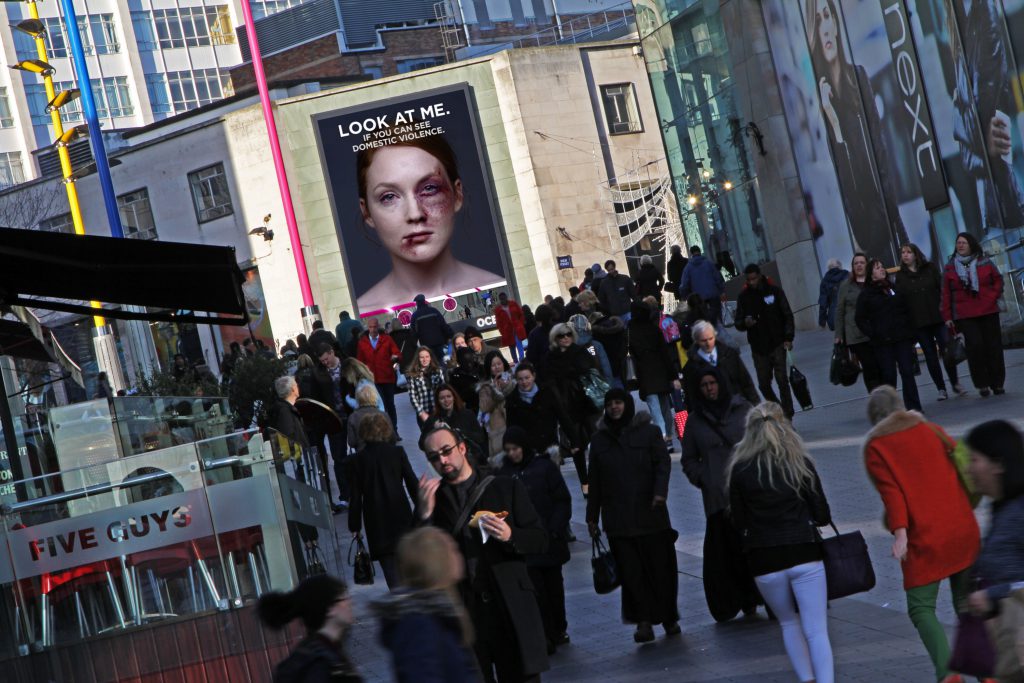 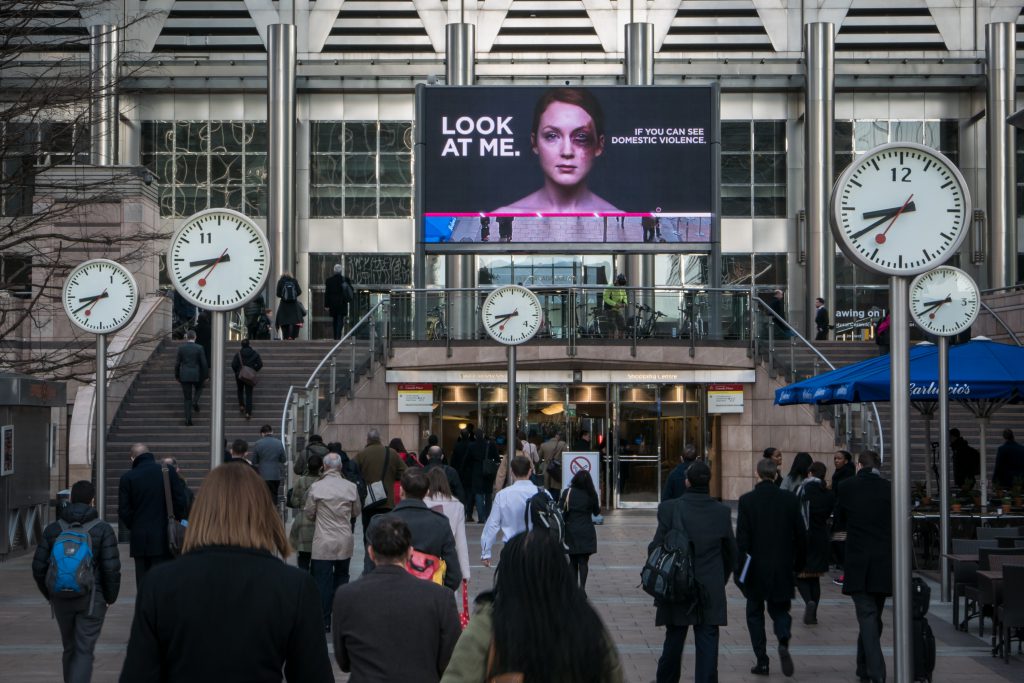 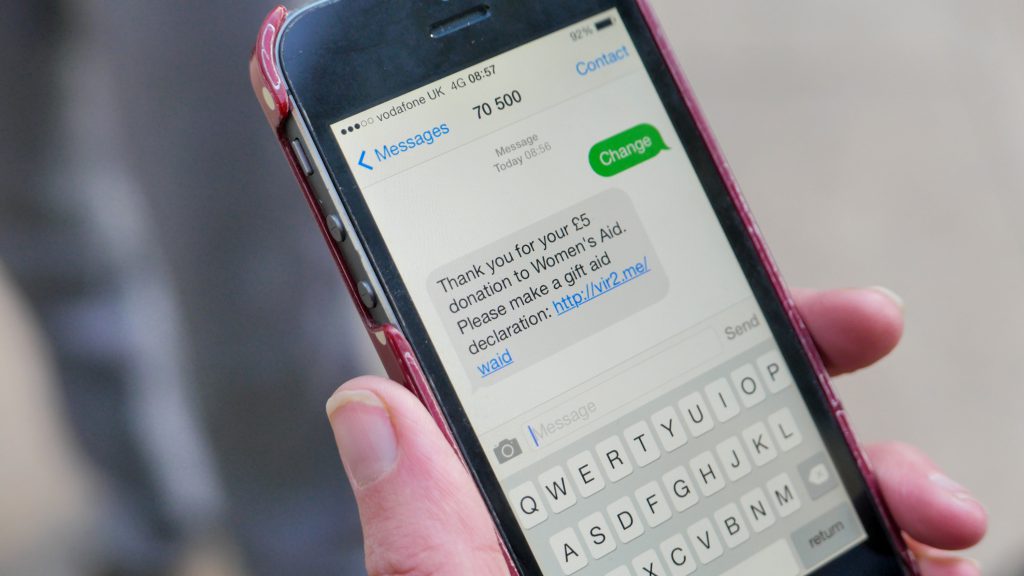 Support from Prime time TV spot to air on Channel 4

In a world first for digital out of home, Ocean, Women’s Aid and WCRS are collaborating on an interactive campaign which shows how we can all make tangible changes in the fight against domestic violence.

The collaboration is a world first because this is the first time the attention of people looking at the digital screens triggers an immediate change in the creative. Ocean exclusively operate facial awareness technology on large format Digital out of Home in the UK, and in delivering this campaign are the first organisation to utilise the gaze tracking element of the system to trigger or superimpose content for live playback in real time on the screens.

The campaign premieres on Thursday, March 5th at The Screen @ Canary Wharf in London and then rolls out to the The Screen @ New Street in Birmingham and Eat Street @ Westfield London on March 7th and 8th.

The initiative will also be supported on Channel 4 with a specially introduced 30 second prime time TV spot designed to amplify the message during the centre break of brand new drama Indian Summers on Sunday, March 8th. The spot will be repeated at 7.20pm the following day in Channel 4 News’ ad break. Promotion of these TV spots will also run across some of Ocean’s most high profile Digital out of home locations in the UK.

The campaign is already an award winner, taking the Interactive Award in Ocean’s annual Art of Outdoor competition 2014.

WCRS worked with famed photographer Rankin, a long-time supporter of Women’s Aid, Ocean and posthouse Smoke and Mirrors to create the interactive billboard which shows the image of a bruised woman with the simple imperative, “Look at me”.

In awarding the WCRS/Women’s Aid campaign the Interactive Award in Ocean’s annual Art of Outdoor competition 2014, the judging panel said: “This campaign figures out how many people are looking at the screen – and the longer you look at it the more it changes. This has not been done before. So, paying attention has a positive effect. It’s very clever.”

How the campaign works:

The creative employs a unique use of facial detection technology which allows the interactive billboards to recognise when people actively pay attention to an image of a bruised woman. Those who look at the billboard get feedback via a live video feed that runs along the bottom of the ad as a visual ticker-tape, registering an increasing number of viewers.

As more people take notice of the image of the women, her bruises slowly heal, demonstrating to passers-by that by actually taking notice they can help confront the signs of domestic violence by not turning a blind eye.

Ocean CEO Tim Bleakley said: “This is powerful stuff. The link between our premium screens as a live and changing canvas to publicly address an issue that often goes unreported demonstrates the dynamic capability of digital out of home to amplify an incredibly important issue. The TV spots on Channel 4 will promote the importance of the message and the work of Women’s Aid.”

Polly Neate, Chief Executive of Women’s Aid, said: “Domestic violence is experienced by hundreds of thousands of women every year, but many feel unable to tell anyone because they think that they won’t be believed or that people won’t understand. These women live in an invisible prison: controlled and harmed by the person who should love them most. We are grateful to WCRS and Rankin for donating their time to create this impactful campaign that will raise awareness of domestic violence, as well as funds for Women’s Aid. Women’s Aid saves lives: two women every week are killed by a current or former partner in England and Wales. A donation to Women’s Aid can help someone to escape a life-threatening situation.”

Ross Neil, creative director at WCRS, said: “We are proud to be the first agency to demonstrate cause and effect to audiences by using facial detection technology in this large-scale billboard format. The simplicity of the advert’s wording and image implicates passers-by in their inactivity before the advanced technology demonstrates how they personally can make a change in the fight against domestic violence by engaging with it.”