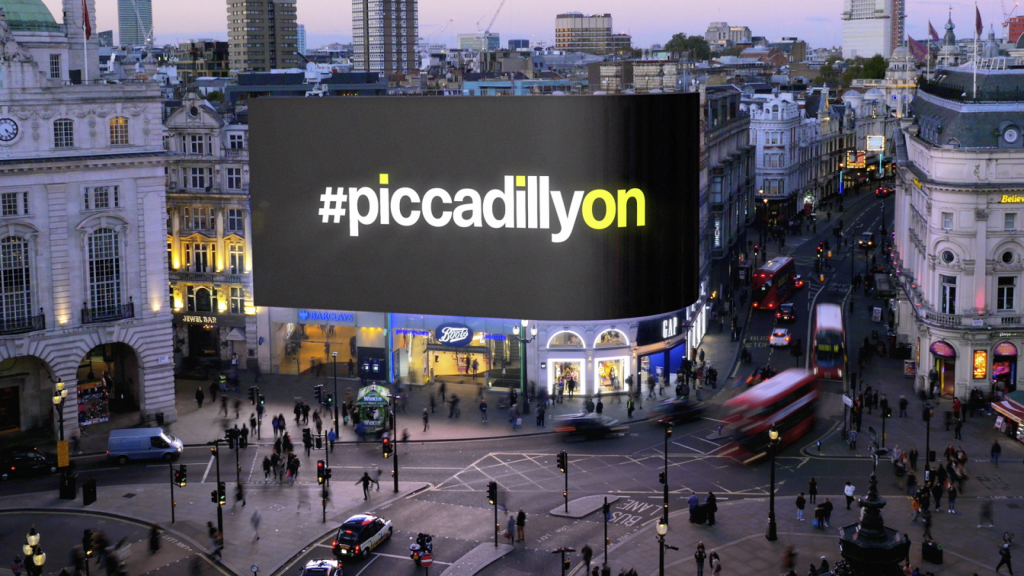 The countdown has begun for the world-famous Piccadilly Lights to be switched back on, after over nine months in darkness for major renovation work. To mark the moment, Landsec, the UK’s largest listed commercial property company and owner of the Lights, is launching the #PiccadillyOn campaign, bringing colour to life in aid of Barnardo’s.

The #PiccadillyOn campaign, which launches today, invites people around the world to be part of this remarkable moment in London’s history. For a minimum donation of £2.00, people can sponsor a unique colour chip which will form part of a 3D countdown clock on the screen, before forming part of a choreographed reveal moment in October.

At the moment of relaunch, the screens will be powered up with a spectacular display of the sponsored colours, each of which will be shown on screen and live streamed on Facebook for fans across the globe to watch.

Anyone can own a unique piece of London’s digital history by visiting www.PiccadillyOn.London, where they can choose their colour to support Barnardo’s and be part of this historic moment. Supporters will receive their unique digital colour chip to post on their social media channels.

All money raised will go to Barnardo’s, the UK’s largest children’s charity and Landsec’s national charity partner for 2017. Coca-Cola, which has long been part of Piccadilly Lights’ history, has kicked off the fundraising with a donation to sponsor their red colour chip.

The Piccadilly Lights site has been under renovation since January. The original patchwork of screens is being replaced with a single state-of-the-art 4K LED digital screen and live technology hub. This will be the largest screen of its kind in Europe and will be able to divide into six full and subtle motion segments. Advertisers will be able to stream live videos, lifestyle updates, such as weather and sports results, and real time social media feeds.

“#PiccadillyOn continues Piccadilly Lights’ tradition for innovation, offering brands pioneering technology to connect with and create new experiences for the 100 million people who pass through Piccadilly Circus every year. It’s a privilege to be able to fundraise for Barnardo’s as we deliver such a historic moment for London.”

“We’re absolutely thrilled that Landsec has chosen Barnardo’s, the UK’s leading children’s charity, to be the beneficiary of the #PiccadillyOn campaign. By sponsoring a colour, members of the public will literally be lighting up the lives of thousands of vulnerable children and helping them to have brighter futures.

“A donation will allow us to continue our vital work supporting children most in need to lead positive and fulfilling lives.”

“The Piccadilly Lights have been an important part of our marketing strategy for over 60 years and we’re proud to continue this legacy with #PiccadillyOn, which not only supports an important UK charity but allows members of the public to be part of advertising history.

“We look forward to a new chapter for the Piccadilly Lights and showcasing new Coca-Cola content on the innovative screen.”

Ocean Outdoor CEO Tim Bleakley said:  “Piccadilly Lights is the world’s most complex, feature rich advertising display and surpasses all other out-of-home sites for its technical and interactive broadcast capabilities.

“Operationally, Piccadilly Lights will be like running six TV channels. No other screen can synchronise content from six advertisers to a precise broadcast transmission schedule which is timed to the second. This project is a terrific investment in the development of digital out of home; it demonstrates pioneering leadership and innovation in this field.”

The new screen was manufactured by Daktronics and is supported around the clock by a bespoke technical hub developed by Landsec, Ocean and London based Digital Media Technologies.

To get involved and be a part of the iconic switch-on moment, people can choose their colour and donate at www.PiccadillyOn.London and share their support on social media using #PiccadillyOn.