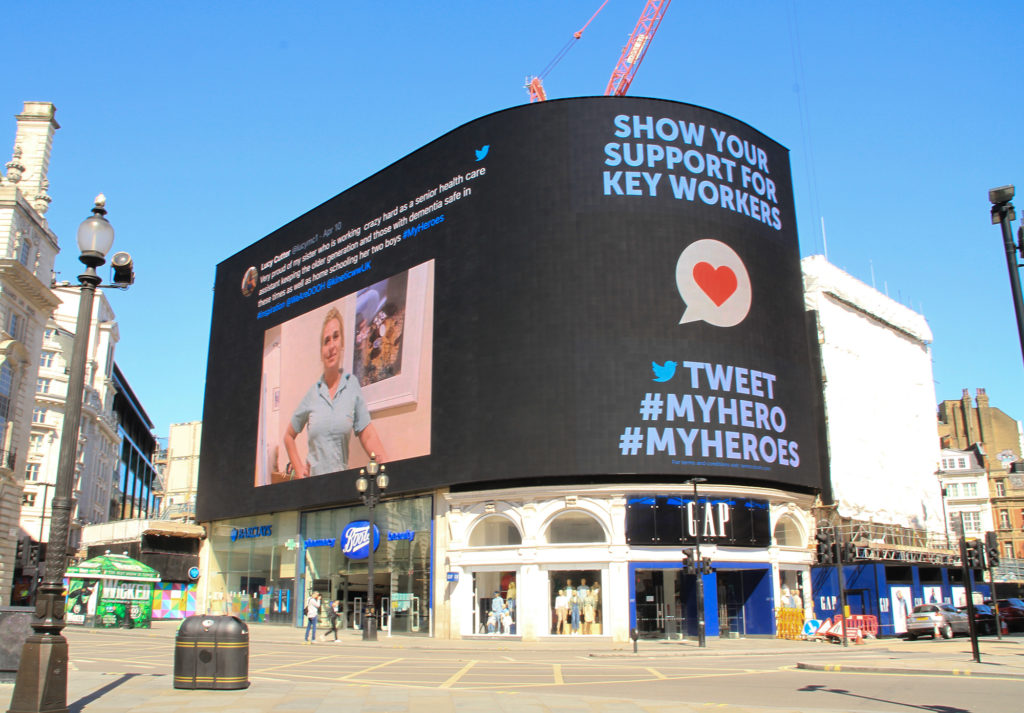 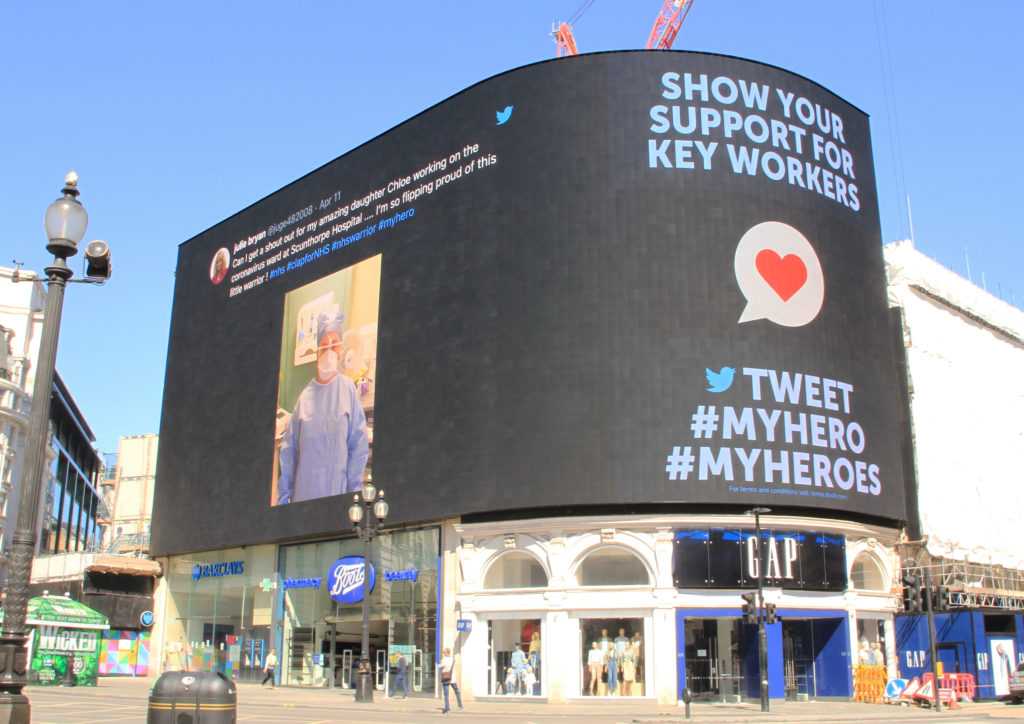 Led by the Capital, and including cities across the nation, the #MyHeroes campaign highlights the beauty of connectivity at a time where physical human connection is limited; showcasing powerful messages of love and thanks for Key Workers across the UK – from farmers to NHS workers, to teachers, pharmacists and delivery drivers.

The time is now to name the people in your life who you feel you need to show your respect, and appreciation; those that are risking their lives to keep us safe. Through the #MyHeroes campaign all you need to do is tweet your thank you message with #MyHeroes. In keeping with the ‘Stay Home’ message, people have the power to connect with Key Workers across the nation by displaying their gratitude on screen without leaving the house.

#MyHeroes marries social media to digital OOH, making sure that the people who most need to see, and send, these messages will be able to do so. Tweets will illuminate Piccadilly Lights, alongside other screens throughout the UK – from Glasgow, Liverpool to Cardiff to Plymouth, and many more – bringing together a nation separated through isolation with words of love.

The campaign connects messages of individuals on twitter to their heroes; so that those on the ground, and others on their essential journeys, will see the words of support and know their whole nation stands with them.

Julie Bryan, whose daughter Chloe is a Key Worker in the NHS, commented on the campaign and seeing Chloe celebrated on Piccadilly Lights, saying: “Seeing my daughter on the screen at Piccadilly Circus brings this home in the most beautiful way. I couldn’t be more proud, of her and of everyone else putting their lives on the line for all of us. Being able to thank her, and give the gift of making it public just means the world. I encourage everyone to share some love and tweet using #MyHeroes.”

Everybody has a hero that they want to thank during this time, celebrities such as Lord Alan Sugar, Leigh Halfpenny, Lord Seb Coe, and Sarah Beeny have also joined in to show support to their loved ones.

This campaign was created by agencies DOOH.com and Kinetic UK, with the support of media owners across the UK, including Ocean Outdoor who operate Piccadilly Lights on behalf of Landsec.

Andrew Phipps-Newman, CEO of DOOH.com: “When the Key Workers in London are on their way to and from work, and when the general public are travelling on their essential journeys, we dearly want everyone to see and experience the support the nation has for them. Being able to place their pictures on the iconic Piccadilly Lights is truly something special.

“We hope that seeing our collective gratitude, love and respect will lift the spirits of those in our lives who are having to carry on in the toughest of circumstances so that we can stay home and stay safe.”

Landsec commercial media manager Derek Manns said: “We’re delighted to continue to support NHS heroes and key workers for everything that they’re doing to keep us safe and healthy during these challenging times.”

Ali MacCallum, CEO of Kinetic UK: “The #MyHeroes campaign is another brilliant demonstration of the OOH industry coming together to deliver a public message of support for key workers. OOH’s ability to amplify social media content in public in real-time, while at the same time generating striking dynamic visual content for social sharing, is something unique to OOH as a channel.”