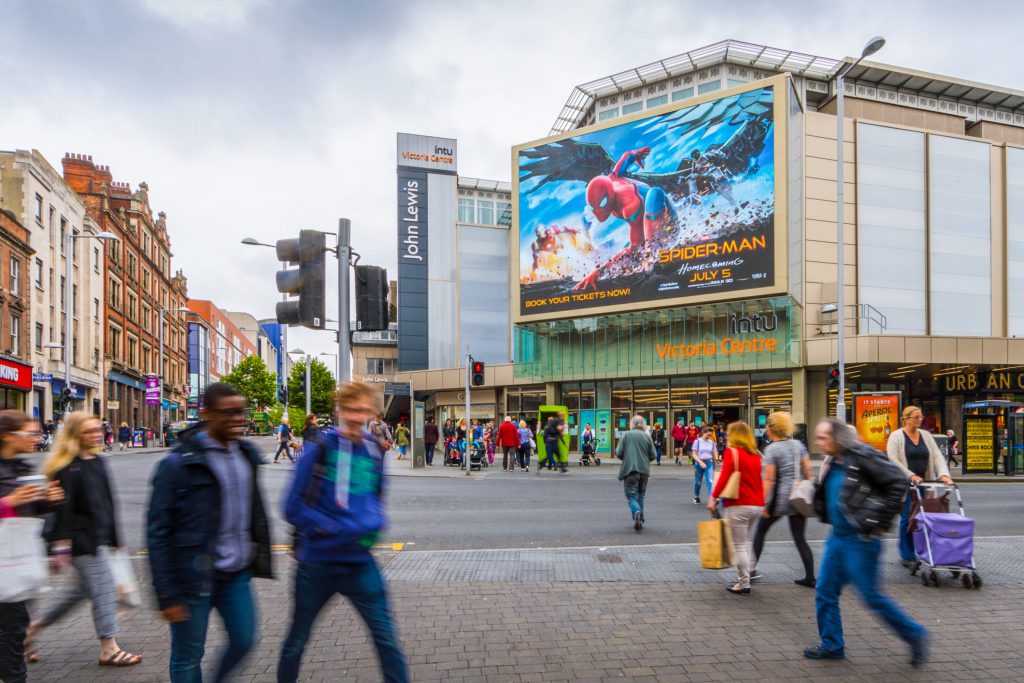 The expansion of Ocean’s portfolio to Nottingham, our 10th city and the UK’s seventh busiest retail centre, is timely.

Nottingham One, the City’s first large format external digital screen, is positioned directly above the main entrance to the intu Victoria Centre, a retail space which registers 24 million shoppers a year.

That’s the highest shopper footfall in the East Midlands, the numbers close to those registered by Westfield London (28 million).

Nottingham has a vibrant, young population, the fourth largest in the UK. Forty-one per cent are 16 to 44 year olds, including 80,000 students.

The introduction of Nottingham One fills a void in the external large format screen market in the City, allowing brands to make a real step change in how they use DOOH to connect with mobile, “always on” audiences who also register as light TV viewers.

Industry studies show that DOOH not only builds long term metrics like brand awareness, but triggers short term consumer behaviour by driving customers to engage with brands via their mobile devices.

This is mirrored by Ocean’s own light TV viewers’ research which monitors the habits of hard to reach multi-screening audiences and how they connect with DOOH:

Given that 42% of Nottingham’s population registers as Light TV viewers, watching less than three hours a day, the case for using clever OOH to reach the City’s young demographic when they are out socialising and shopping gets even more compelling.

Given Nottingham’s young, mobile demographic, it’s an easy bet that when they are out, there’s constantly on their phones.

This alone makes the case for union even more compelling as the lines between mobile, digital and out of home continue to blur.