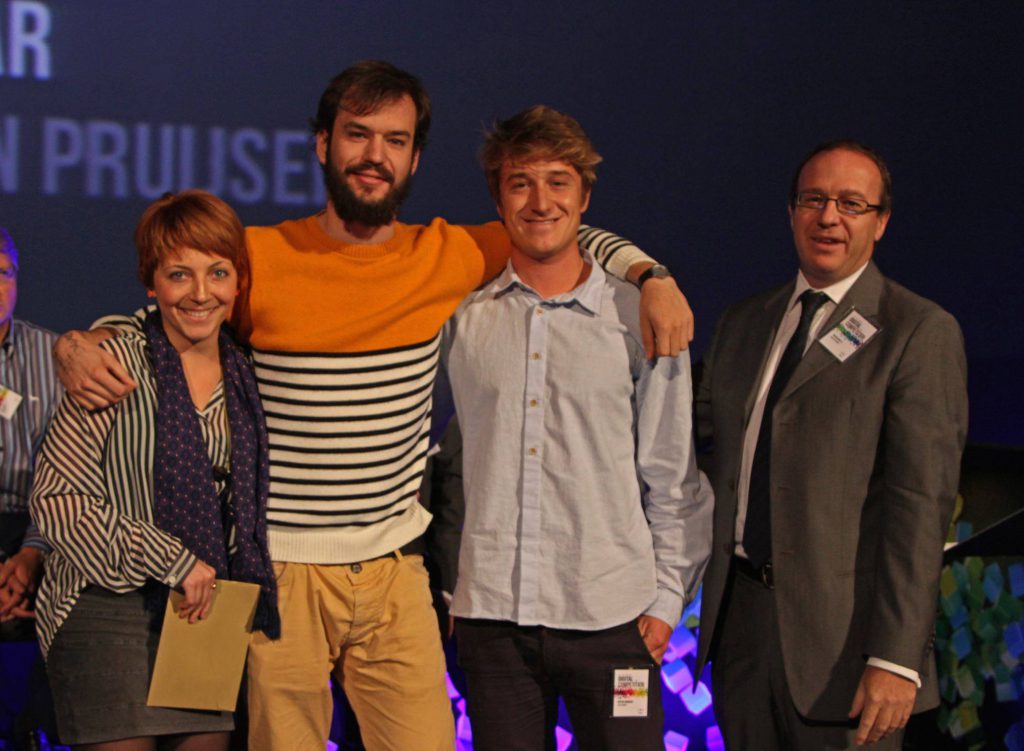 The winning team collecting their prize from Tim Bleakley Download

Ocean Outdoor has announced the winners of its annual The Art of Outdoor Digital competition which celebrates pioneering agencies and brands that are pushing the creative boundaries of digital out of home advertising, showcasing their content on Ocean’s extensive digital network.

Car brand Toyota is named overall winner for a campaign to promote the superb efficiency of its new Yaris Hybrid, using full motion technology and floor tiles in an interactive installation to demonstrate the power of renewable energy. The campaign was created by Glue Isobar.

Second place is awarded to the charity Compassion in World Farming for The World’s First Real Live Feed, which invites people to show their support by feeding Patsy and other free range farm pigs and make a donation to the cause via text interactivity. The campaign was created by Elvis and was showcased at the Eat Street @ Westfield site.

Third place goes to Heineken for a campaign inviting football fans to become part of the world’s largest ever team photo in the run up to the 2013 UEFA Champions League Final, and to receive their very own digital Panini sticker uploaded across a network of digital screens. The campaign was created by MediaVest.

Highly commended is awarded to Warner Brothers for a campaign marking the DVD and Blu-Ray release of the Batman movie The Dark Knight Rises. The campaign was created by Grand Visual and showcased an exceptional use of many digital formats within a campaign.

The winners were announced earlier today by Ocean Outdoor CEO Tim Bleakley at an awards ceremony at London’s IMAX, location of the largest iconic outdoor banner opportunity in the UK.

Tim Bleakley said: “Each year, this competition produces Cannes Lion finalists and winners. The quality of this year’s entrants is no exception and reflects the seriousness that the creative community now attaches to the potential of digital out of home. This year also saw the first entries from media agencies, once again signalling a convergence of disciplines.

“Our top four winners are all game changing campaigns which demonstrate the immediacy and relevance of knock-out installations which are simple, strong, highly scalable and likely to catch fire through their amplification well beyond their chosen sites.”

Rich Sutcliffe, Digital Development Director at Brand Republic which partners Ocean Outdoor in the competition, said: “The depth and spread of this year’s entries is matched by the quality and strength of the big creative ideas coming through. Getting into the final set of winning entries this year was a tough call, but the scale of the winning ideas tick all the necessary boxes and exploit the unique nature of digital outdoor.”

To see this year’s winners and a creative showcase of all the entries, go to www.artofoutdoor.com