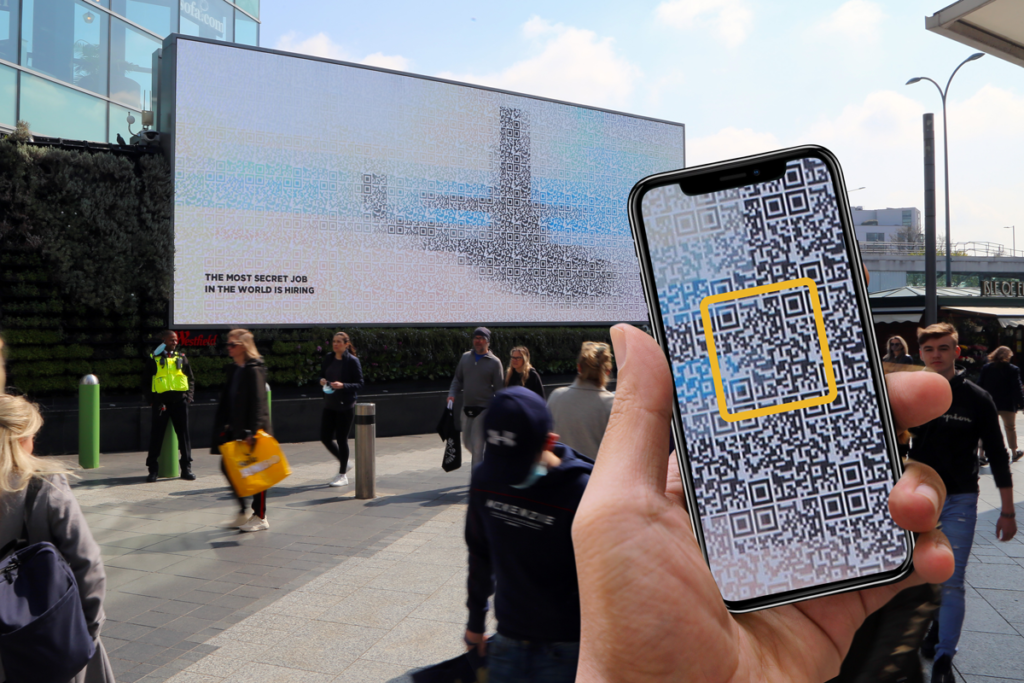 The Royal Navy has launched a recruitment campaign for its most classified division, the Submarine Service, appearing on larger format digital screens in London, Manchester and Birmingham this week.

Created by Engine and following on from the success of their recent TV spots, the interactive outdoor campaign both hides and reveals its message in ‘QR code pixelation’.

An image of a submarine disappearing below the ocean surface is deconstructed and rebuilt using the structure of QR codes, which once scanned, lead viewers to the Royal Navy’s recruitment website.

The creative tech-driven campaign was born out of Engine’s Ocean Outdoor competition win and takes advantage of the recent QR code revival, seen as a result of NHS Track and Trace at leisure and entertainment venues.

It appears for two days from April 21 on three large format premium screens in London’s Westfield centres in Eat Street, Meridian Steps, Northern Ticket Hall and across The Loop networks in Birmingham and Manchester.

Engine’s creative approach reflects the fact that the Submarine Service is the country’s most elusive fighting force, carrying out the most classified military missions as they circumnavigate the earth.

Intrigue is provided at Ocean’s Eat Street, where Look Out audience detection technology will be deployed during a three hour domination on each day.

During those periods when audiences are detected looking at the screen for more than five seconds, the static QR image begins to move, triggering the submarine to disappear below the waves.

Art director at Engine Hugo Isaacs said, “Curiosity is key when it comes to hiring for The Submariners, their classified credentials are what sets them apart. We’d looked at pixilation as a way of concealing messages before but it felt familiar. QR codes gave us this brilliant language that tells you there is more information to be had, while still hiding what’s there. It’s a secret that’s asking to be unlocked”.

Ocean Outdoor senior project manager Melanie Blood said: “This campaign deploys all the capabilities of DOOH screens, using the platform’s immediate connection with mobile audiences to create intrigue around a vocation which is surrounded by mystery.”