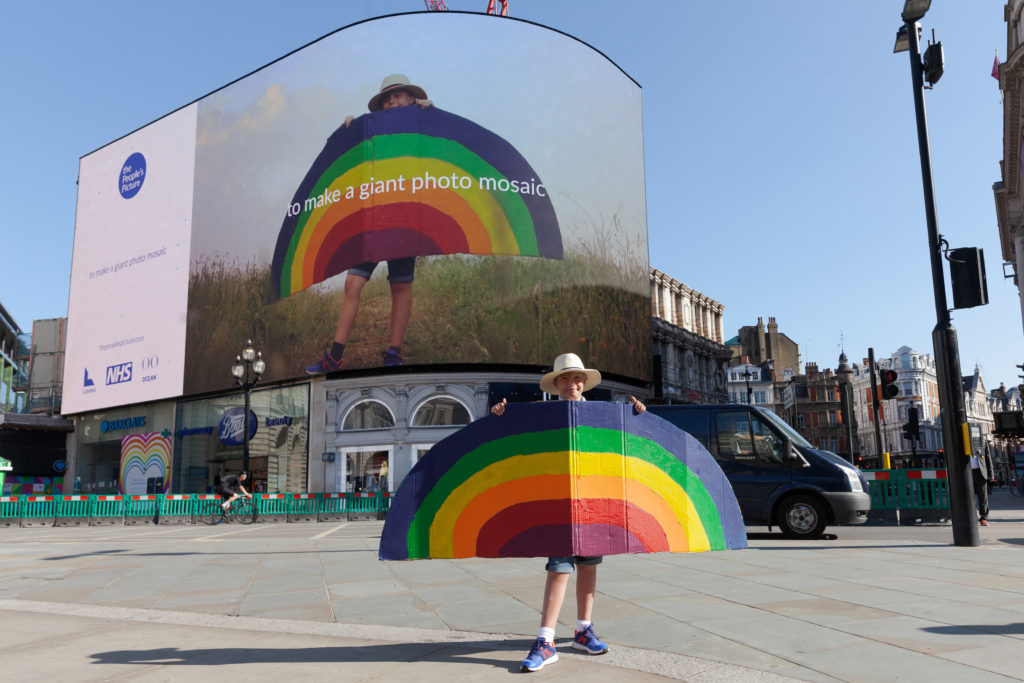 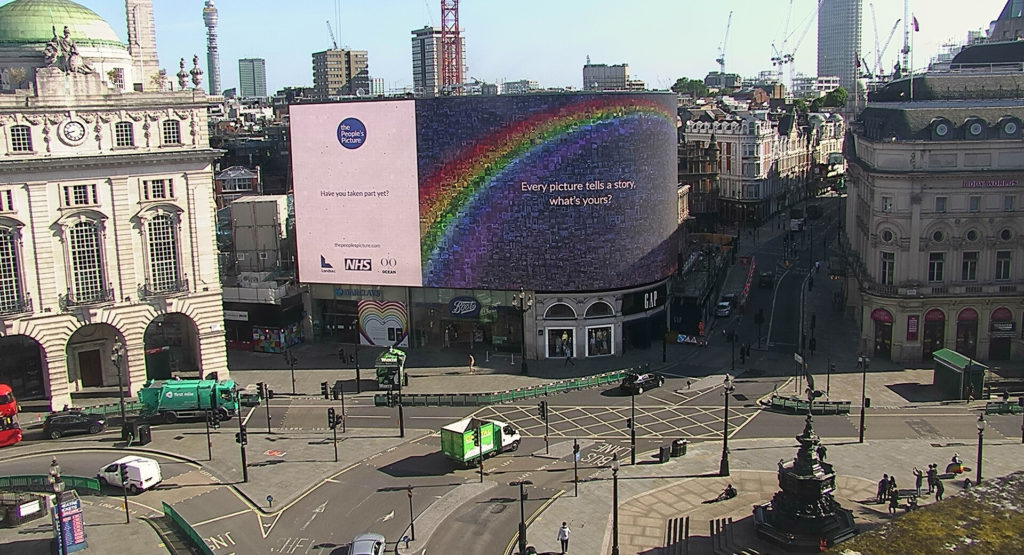 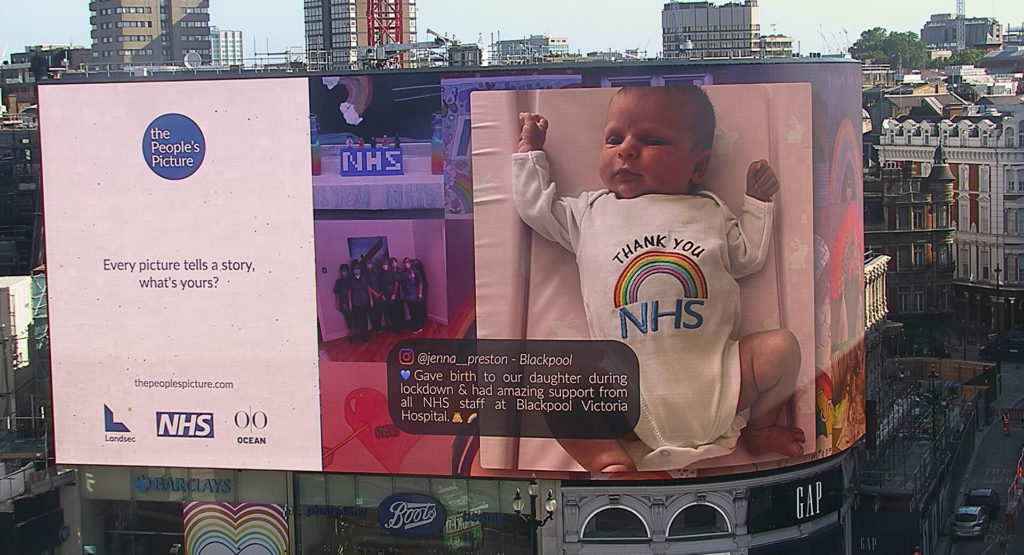 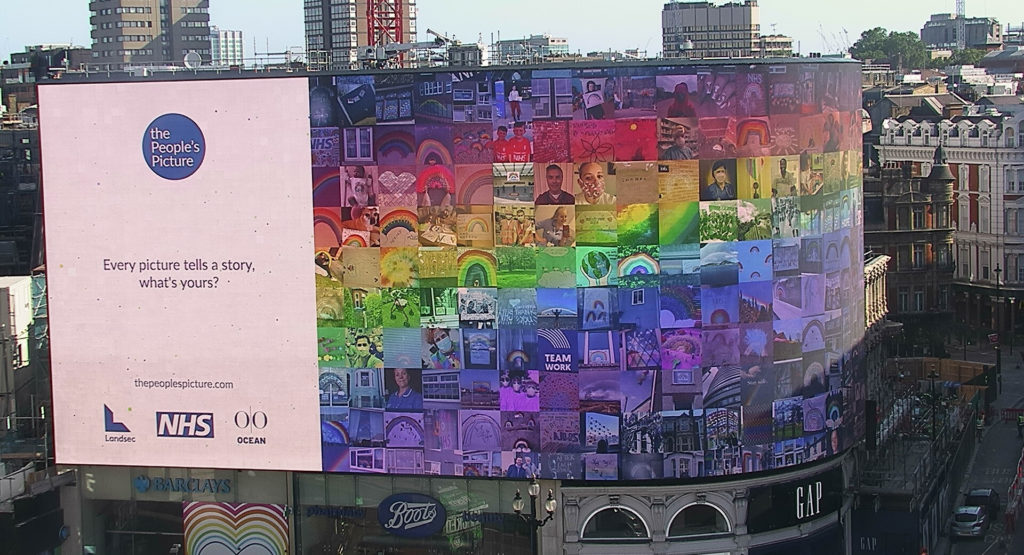 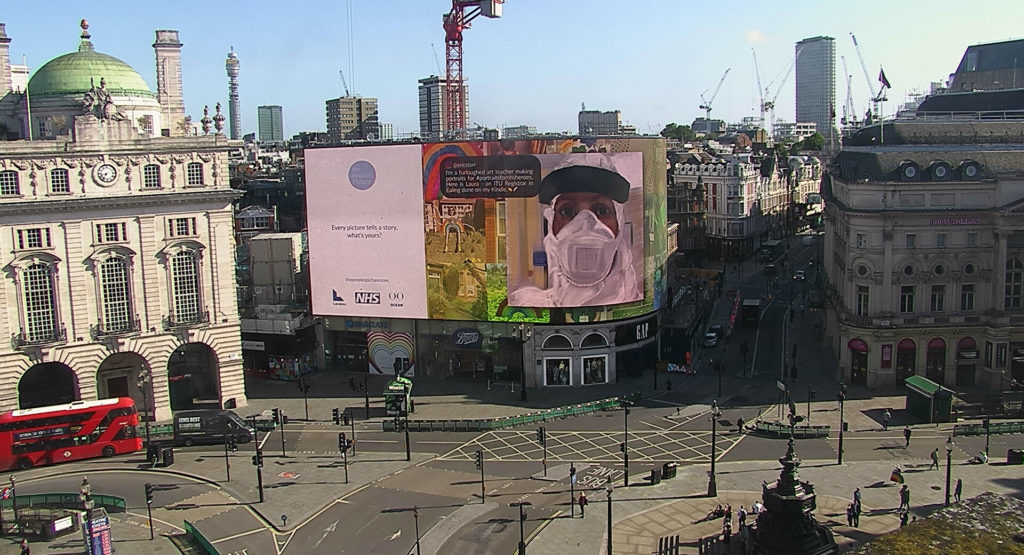 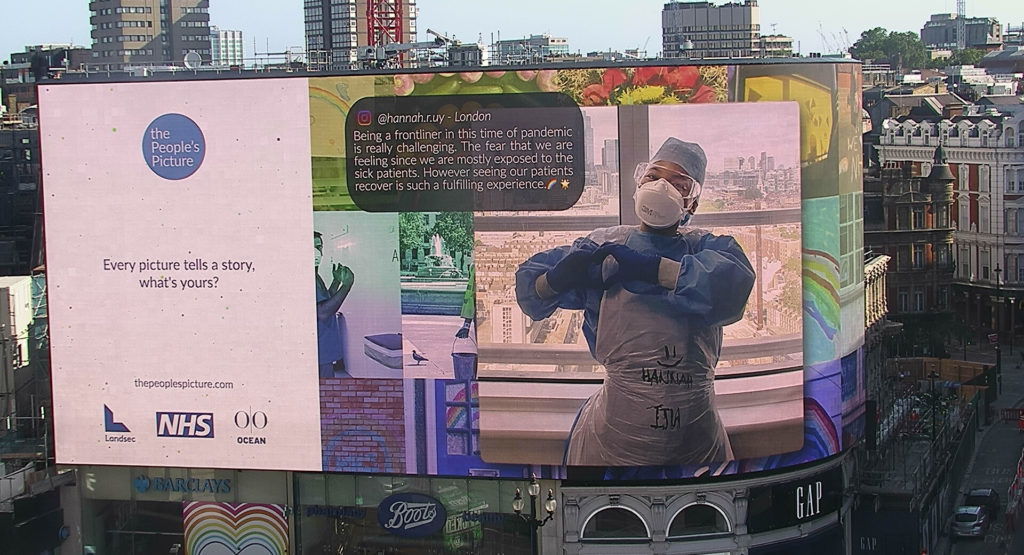 ‘The People’s Picture’ is calling for pictures, videos and stories to create a giant interactive rainbow of “hope” made up of thousands of NHS staff, key workers and carers combined with the nation’s photos.

The art project, called Rainbows for the NHS, was officially launched by the Piccadilly Lights today (June 22) with the message “Every picture tells a story, what’s yours? be creative, stay well. Thanks to the NHS”.

The mosaic, which is made up of thousands of individual photos provided by nurses, doctors, patients and their families, features on Landsec’s large format screen until June 28.

Landsec and Ocean have collaborated to donate the iconic screen, building upon our community engagement programme which has continued throughout the coronavirus pandemic.

Martin Machray, joint chief nurse for the NHS in London, said: “This is an inclusive and safe way for the nation to connect and thank our NHS, key workers and carers through art. It’s wonderful to have so many images and people represented; each an individual story of hope and testament to this important moment in history.”

Helen Marshall, artist from ‘The People’s Picture’, said: “As an artist I was really moved by the collective creative response of the nation to the pandemic, and like everybody else I wanted to do something. I particularly wanted the NHS staff, key workers and carers stories to be highlighted. By collecting thousands of photos, videos and stories, I have created one giant interactive rainbow mosaic during my time in lockdown.”

Derek Manns, Landsec commercial media manager, said: “Throughout the pandemic, the Piccadilly Lights have been at the centre of London’s salute to our frontline NHS workers carrying a number of important messages and brilliant campaigns. The screen has become a beacon of hope and we are delighted to continue that work with The People’s Picture and the NHS.”

Rosalyn Mackway, Ocean Outdoor business director brand partnerships says: “From Her Majesty the Queen and Sir Captain Tom Moore to all the messages of hope and solidarity carried by our advertisers, the NHS rainbow mosaic is another inspirational moment of togetherness to mark the resilience and spirit of London.”

12,456 pictures and stories have been collected so far. Once complete, the mosaic will be viewed as a giant interactive online for everyone to enjoy from their homes.

We launched 'Rainbows for the NHS' at #PiccadillyLights, London this morning! Upload your photos & stories by Monday 29th June to be part of our giant rainbow mosaic to say thanks to @NHSEngland staff, key workers & carers 🌈 https://t.co/t2juX861Ap pic.twitter.com/weyEnsW5Zk