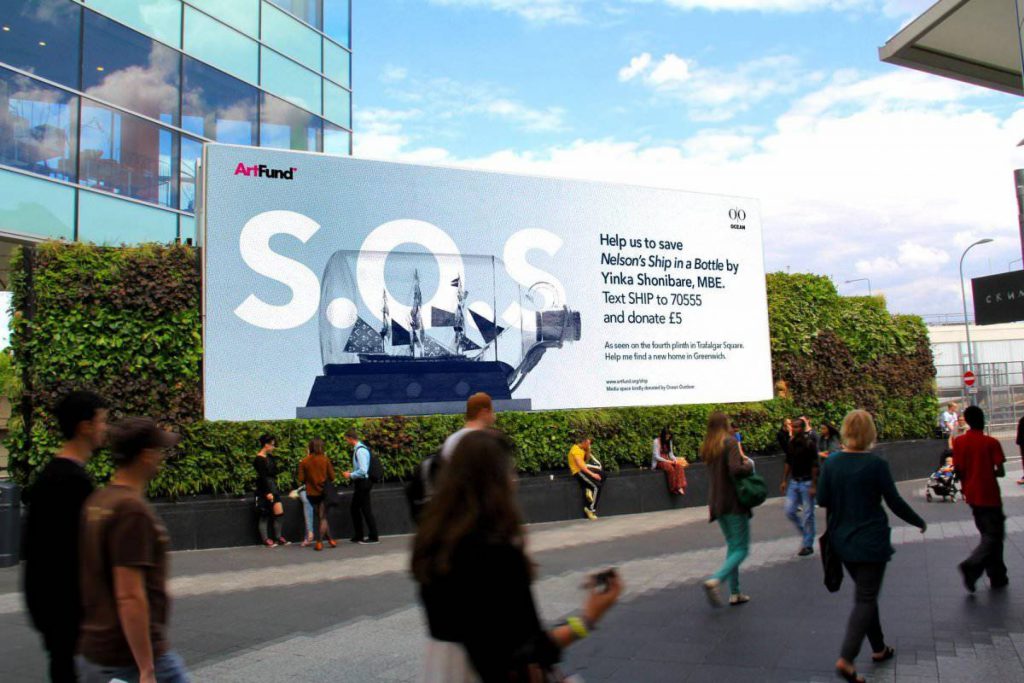 A permanent new berth has been secured for Yinka Shonibare, MBE’s acclaimed sculpture Nelson’s Ship in a Bottle after a public appeal backed by Ocean Outdoor successfully raised £362,500.

Ocean Outdoor CEO Tim Bleakley donated £362,500 in advertising space to help the Art Fund and National Maritime Museum save the ship for the nation after hearing that it might fall into the hands of a private overseas art collector.

News about Ocean’s offer attracted support from media and charity journals, and tweets about the outdoor campaign from key figureheads like Channel 4 journalist Jon Snow helped spread the news further.

“It’s brilliant news for everyone involved and reflects the generosity of individuals who have embraced the public fund-raising campaign. We are delighted to have been able to help save this remarkable iconic work,” said Tim Bleakley.

The sculpture, which is a scaled down replica of Nelson’s flagship Victory, will now have a permanent new home outside the recently developed Sammy Ofer Wing at the National Maritime Museum. It will be on view in time for the Museum’s 75th anniversary which is on April 25.

The critically-acclaimed work was originally commissioned by the Mayor of London for the Fourth Plinth in Trafalgar Square, where it was displayed from May 2010 to January 2012. A public appeal to raise the necessary funds (£362,500 after an Art Fund grant of £50,000) to acquire the work for the National Maritime Museum was launched on November 30 2011. £264,300 was raised through the public campaign, mostly from individuals.

Stephen Deuchar, Director of the Art Fund, said: “We are delighted that the Art Fund’s first fundraising appeal for a contemporary work of art has been successful. It is not an easy environment in which to run a campaign but the campaign’s success is testimony to the popularity of Yinka’s work and to the continued generosity of the many enlightened individuals upon whom the charitable sector depends.”

Jon Snow, journalist and Fourth Plinth Commissioning Group member, said: “It’s great news that Yinka Shonibare’s Nelson’s Ship in a Bottle has been secured for the National Maritime Museum. In one fell swoop this totemic sculpture brings together thoughts of empire, slavery, liberation, and the very fibre of our maritime heritage, adding a hugely important multi-cultural dimension to the museum’s message.”