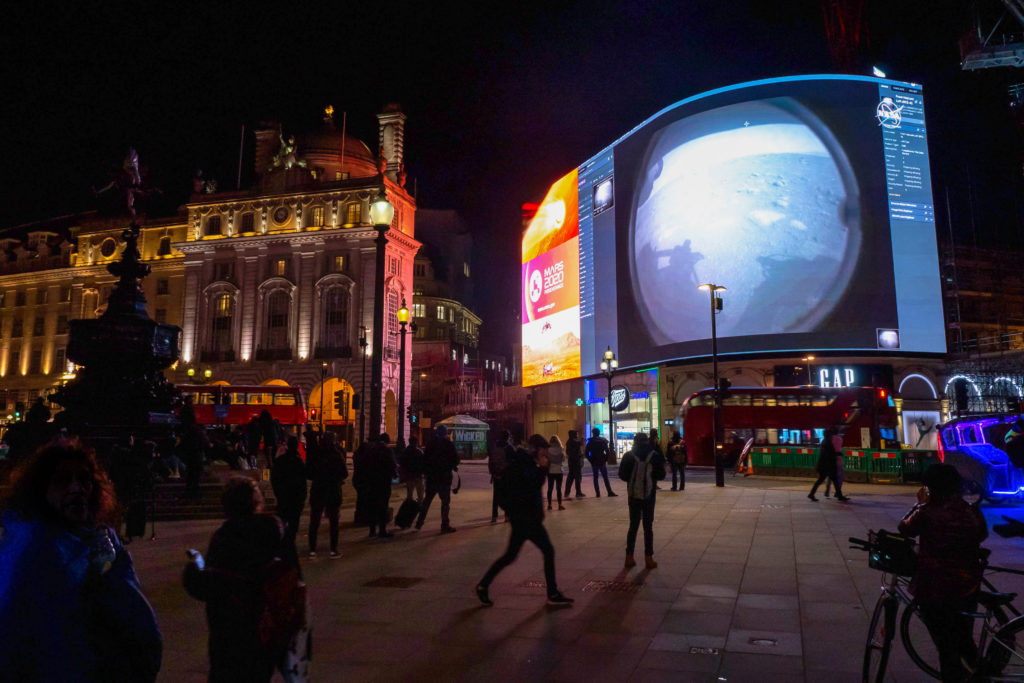 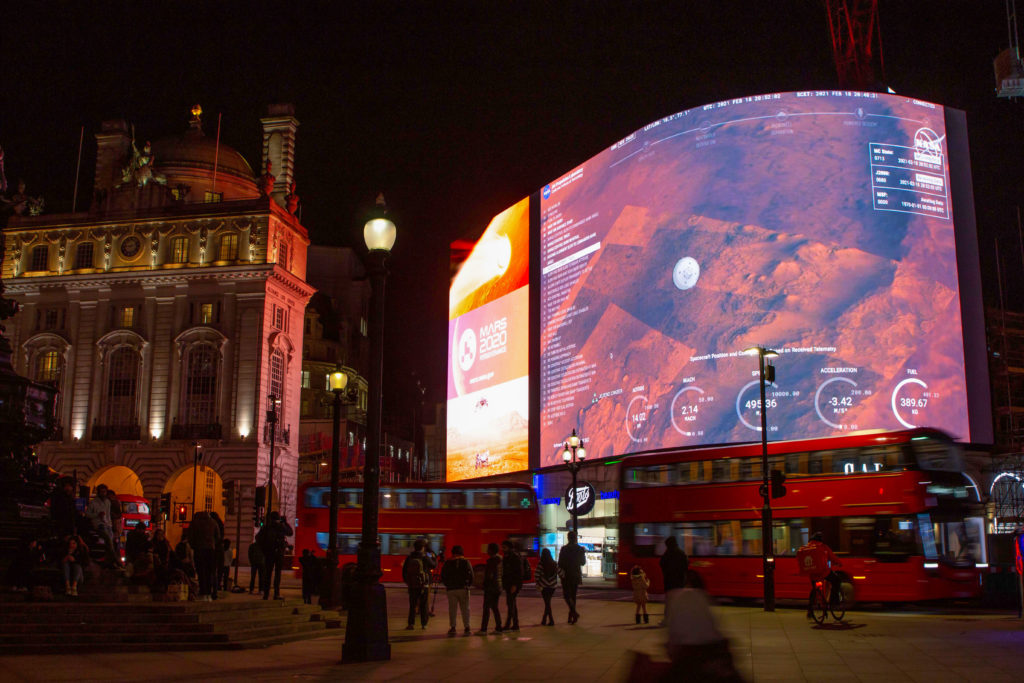 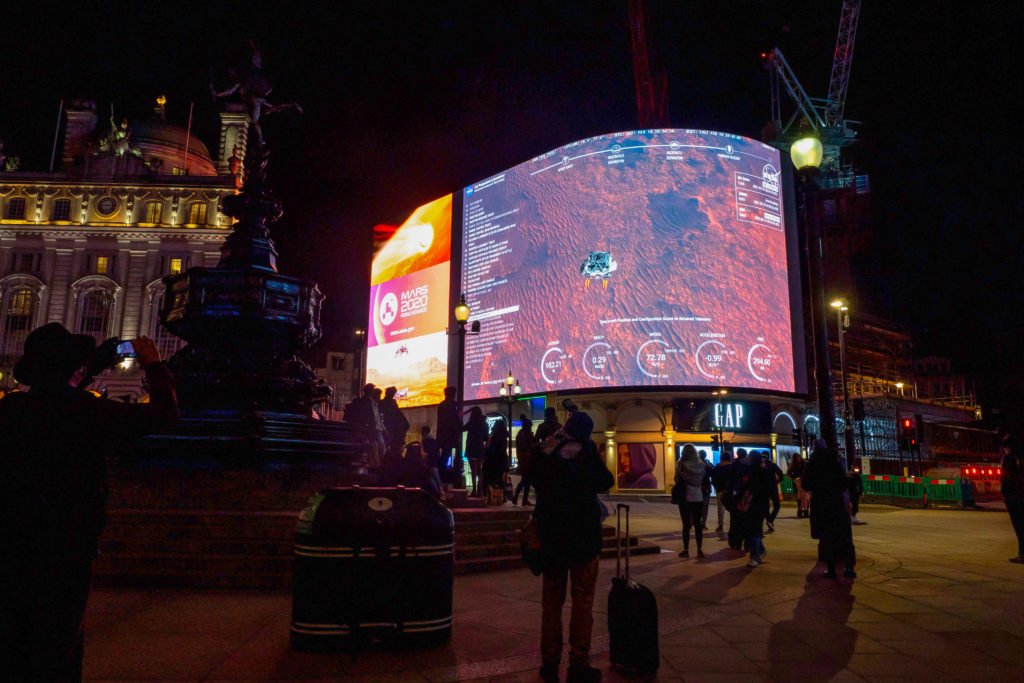 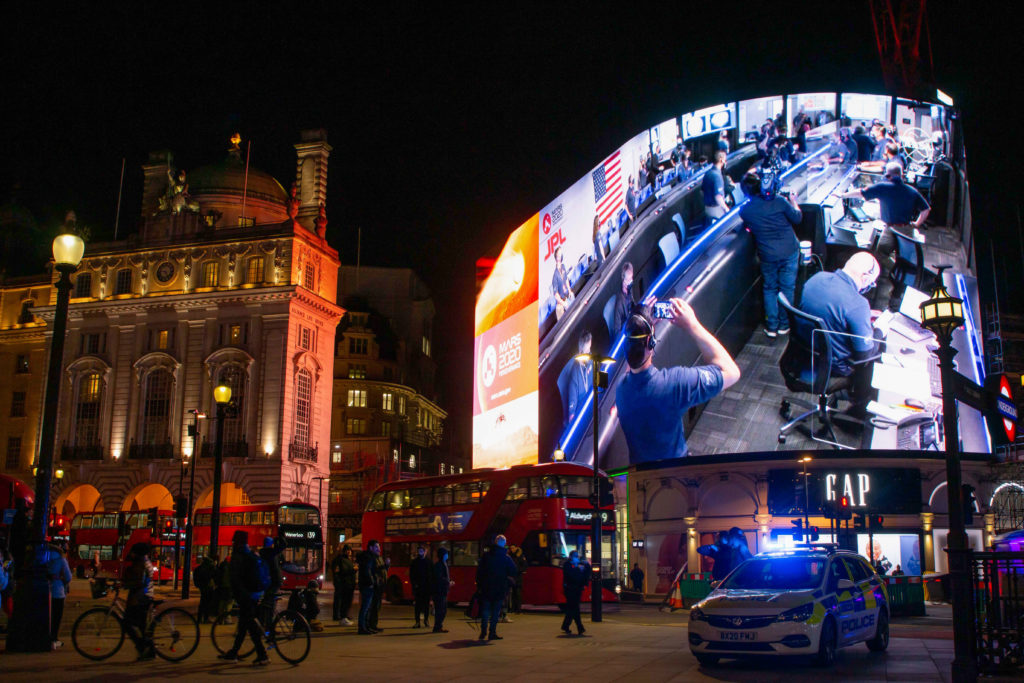 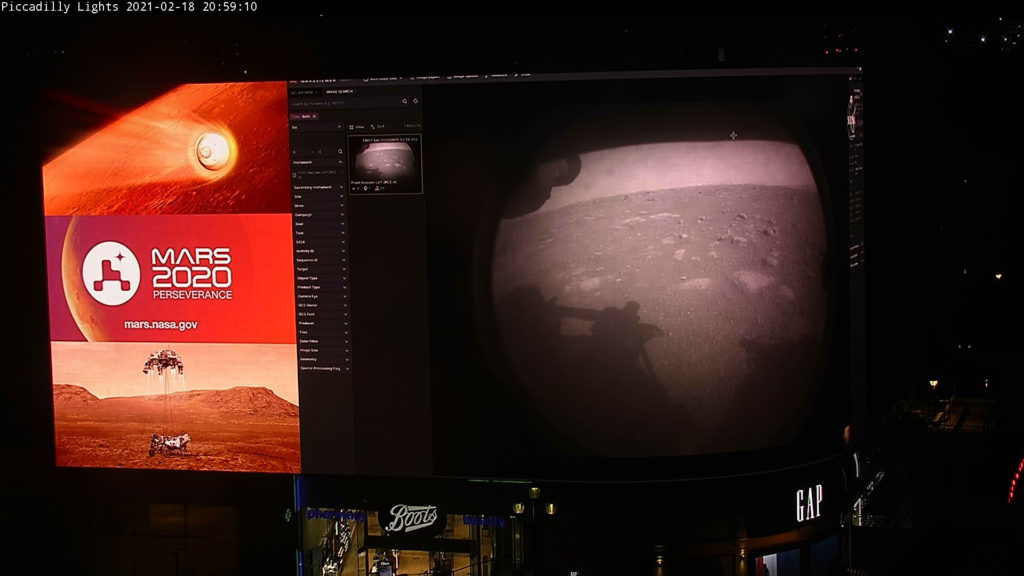 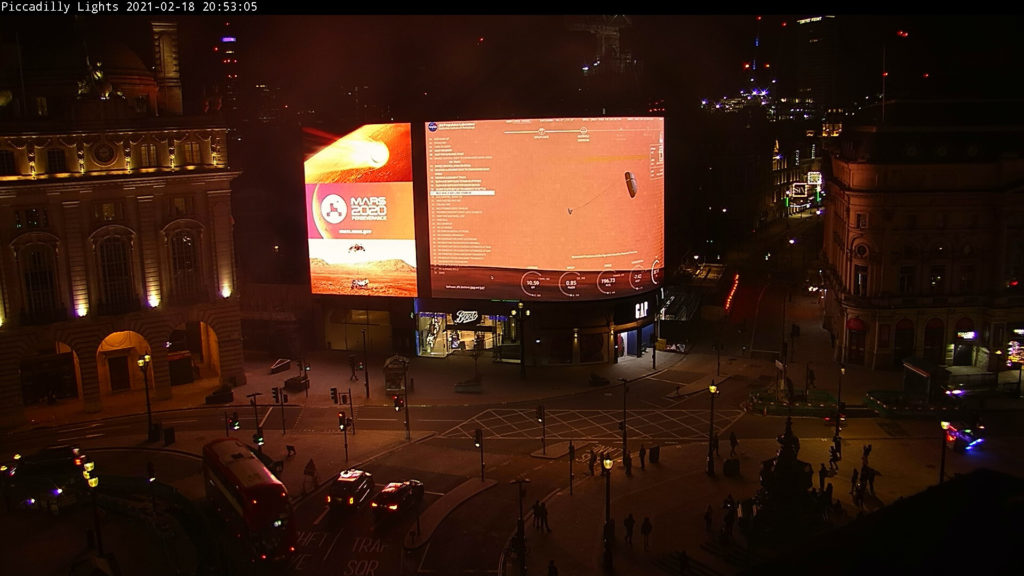 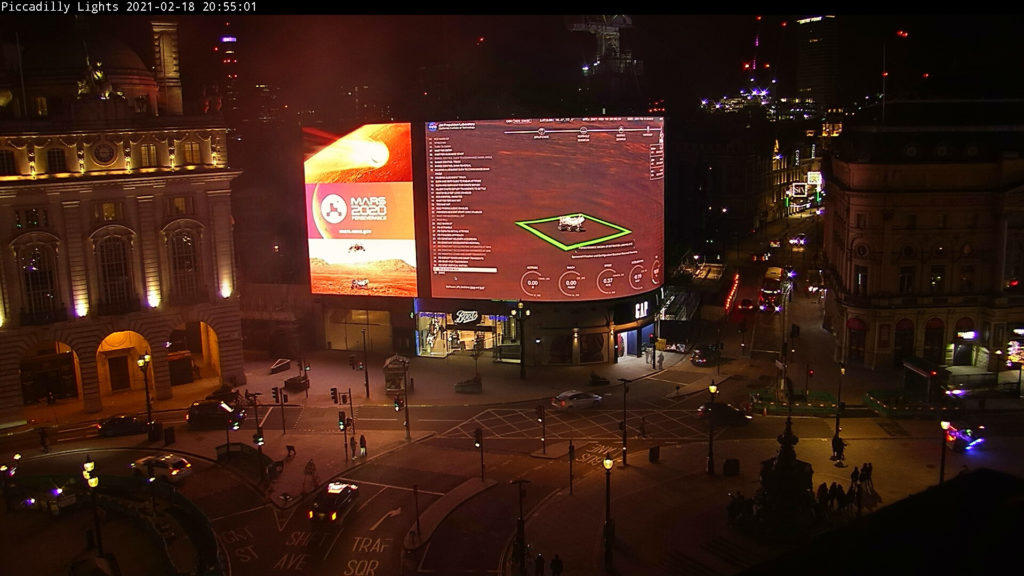 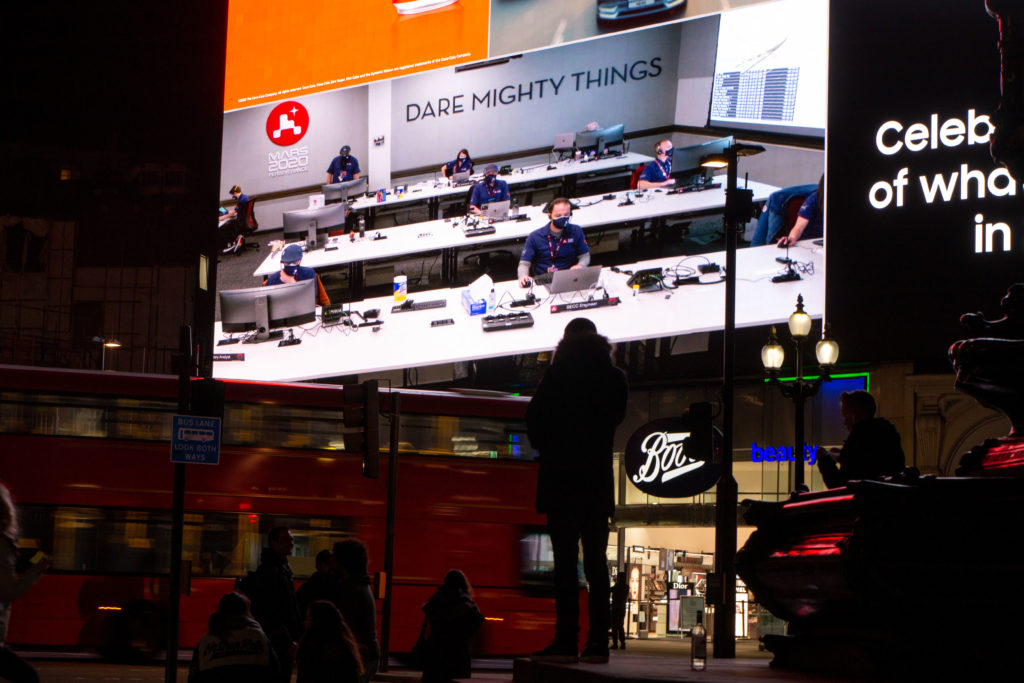 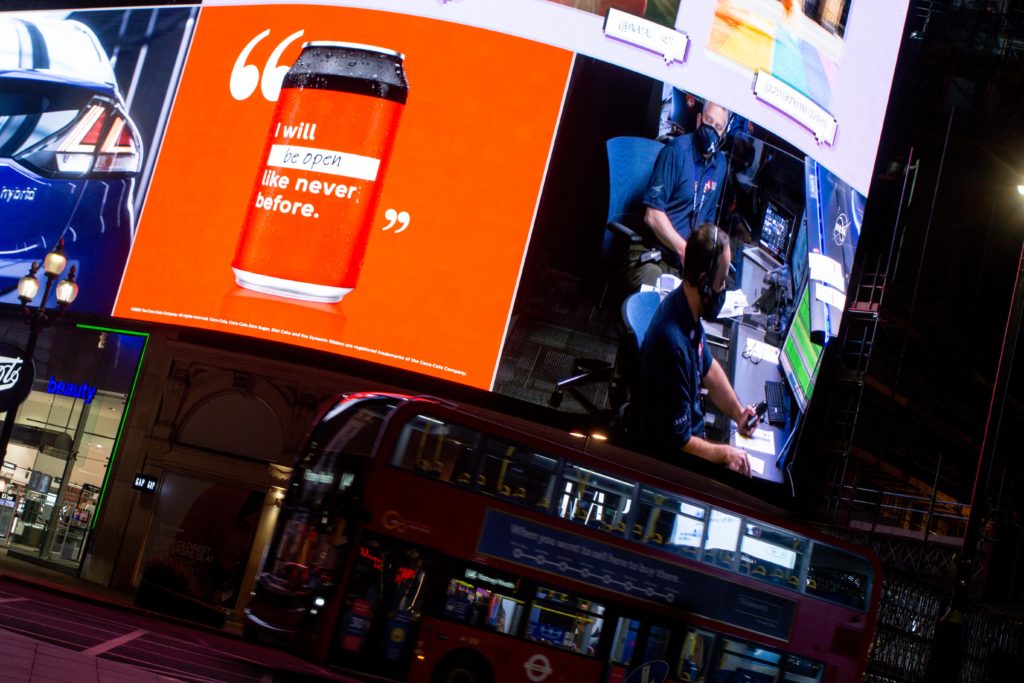 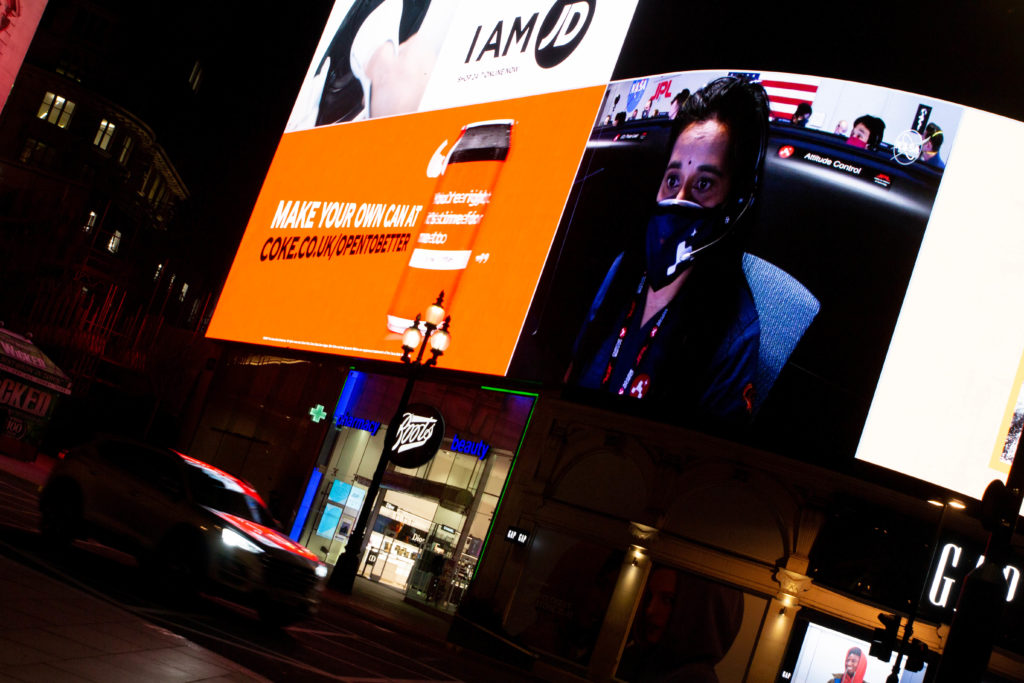 In a media first for UK out of home, the dramatic landing of NASA’s Perseverance rover on Mars was live streamed for 60 minutes on the iconic Piccadilly Lights as it happened on Thursday evening (February 18).

The nail-biting seven minute entry, descent and landing and the first still images from the surface of Mars as the rover started its mission were all projected live on Landsec’s Piccadilly Circus screen in London.

The broadcast was a collaboration between NASA, Landsec and Ocean.

Working with the NASA team, Ocean Labs used new technology to livestream coverage of the descent within the patchwork of commercial advertisers on the Piccadilly screen for 40 minutes from 8.10pm, using a feed directly from the NASA satellite. The Lights then switched to full screen domination from 8.50pm for the final 20 minutes.

The NASA broadcast was unable to show footage of the landing itself because a camera on outside of the spacecraft would not survive the entry into Martian atmosphere.  Rather, the live stream featured the landing team at NASA’s Jet Propulsion Laboratory in Southern California receiving signals from the spacecraft at each stage of entry, descent and landing allowing them to know and communicate if the spacecraft had successfully achieved each of these milestones.

Remarkably, it takes just 10 minutes for Radio signals to reach Piccadilly Circus from Mars, (that’s three times faster than the No 9 bus from Hammersmith to Piccadilly), the 10 minute delay meaning Perseverance had already landed.

The final landing signal elicited a jubilant response from the landing team.

The screen then switched to the first still images from Mars as the Perseverance rover began to explore the Jezero Crater, an ancient lake that existed 3.6 billion years ago. The rover is looking for signs of ancient life and will collect samples that will eventually be returned to Earth.

The broadcast was produced by Ocean Labs with supporting artwork created in-house by Ocean’s design studio.

Catherine Morgan, director of Ocean Labs, said: “Large format digital out of home is a world class platform for sharing moments of international importance and achievement. A live broadcast on this scale has never been achieved on the Piccadilly Lights until now. Our collaboration with NASA and Landsec showcases to superb effect how brands can use the new live streaming feature in the patchwork as well as the full screen.”

Landsec commercial media director Derek Manns said: “This international mission is of worldwide interest and yet another milestone in space exploration. We were happy to join NASA to share this historic moment on the Piccadilly Lights and hopefully find an answer to the fundamental question – is there life on Mars?”

“The Perseverance rover represents NASA’s unbreakable spirit, which perseveres even in the midst of a global pandemic,” said Steve Jurczyk, the agency’s acting administrator.

“As the first leg of a round trip to Mars, Perseverance not only will collect samples of the Red Planet to return to Earth in the next decade, but also carries cutting-edge instruments and technology that will pave the way for future human missions to the Moon and on to Mars.”

NASA’s most sophisticated rover to date has been travelling through space since launching from Cape Canaveral at the end of July. When Perseverance reaches the red planet it will have travelled 292.5 million miles on its mission from Earth.

The size of a small SUV, the rover is the biggest, heaviest, cleanest, and most sophisticated six-wheeled robotic geologist ever launched into space.