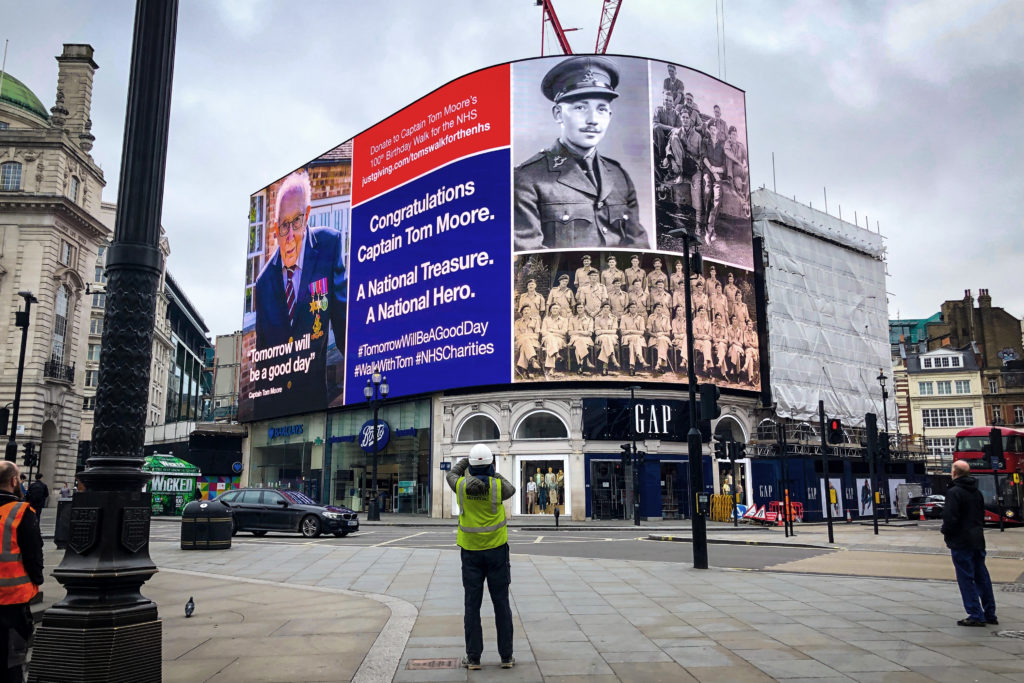 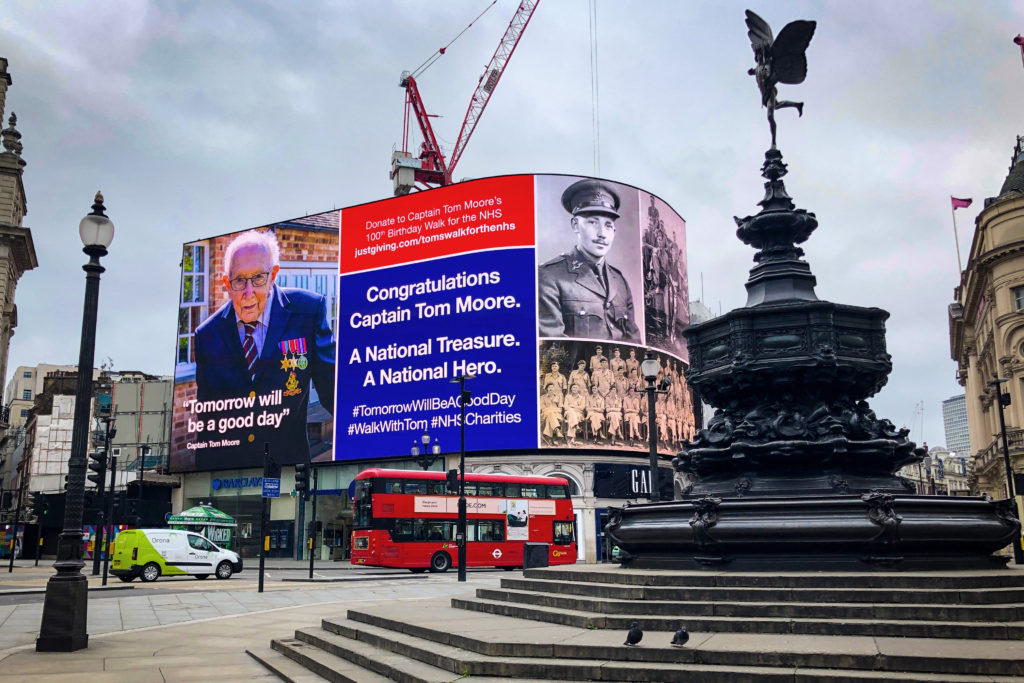 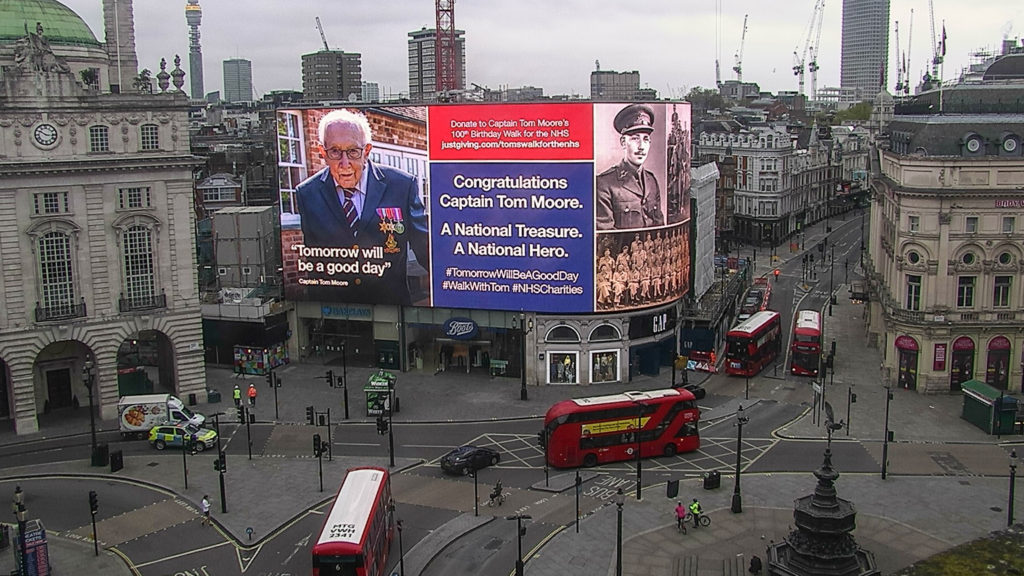 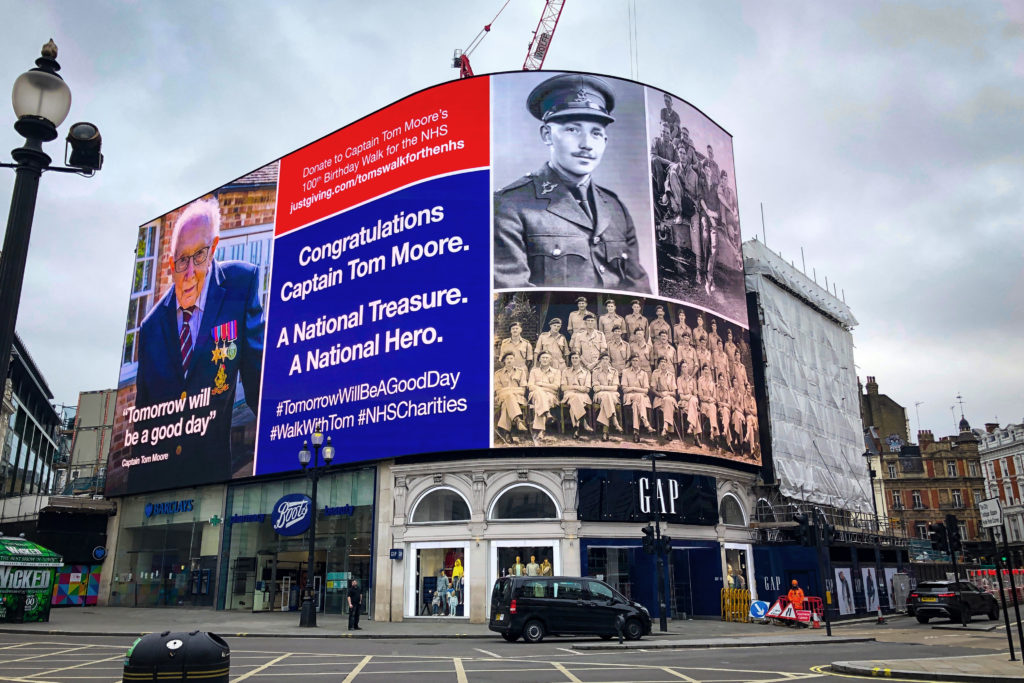 The heroic achievements of 99-year-old war veteran Captain Tom Moore who has raised more than £21 million for NHS charities by walking 100 laps of his garden are being celebrated by the world famous Piccadilly Lights in London.

From 10am on Saturday, April 18, an hourly salute to the army veteran will appear on the world famous Piccadilly Circus advertising screen which is owned by Landsec and operated by Ocean.

The tribute captures the spirit of Captain Moore who wanted to walk 100 laps with the aid of a walking frame before his 100th birthday to raise funds for NHS staff on the frontline during the coronavirus pandemic.

His efforts have won the hearts of the nation, with people donating more than £21 million so far. Captain Moore originally set out to raise £1,000. He now aims to complete a second 100 laps.

The Piccadilly Lights spotlight was created and designed in-house by Ocean and appears with the agreement of Captain Moore. A 30 minute domination on April 18 (from 10am) will be followed by a shorter 40 second sequence at 50 to the hour every day next week.

Further messages will appear on Piccadilly Lights to mark the army veteran’s 100th birthday on April 30 and VE Day on May 8.

Ocean Outdoor UK joint managing director Phil Hall said: “Captain Moore is a national treasure who has lifted us all with his positivity, wisdom and message of hope. He’s an inspirational example to us all.”

The screen space has been donated by Landsec. Commercial media manager Derek Manns said: “What a journey. Captain Moore is a beacon of joy and we are delighted to be able to share his achievement in support of NHS Charities on the Piccadilly Lights.”

Captain Moore joined the 8th Battalion Duke of Wellington’s Regiment at the start of the Second World War. He now lives with his family in Bedfordshire and encourages everyone to trust in his motto that “Tomorrow Will Be A Good Day”.