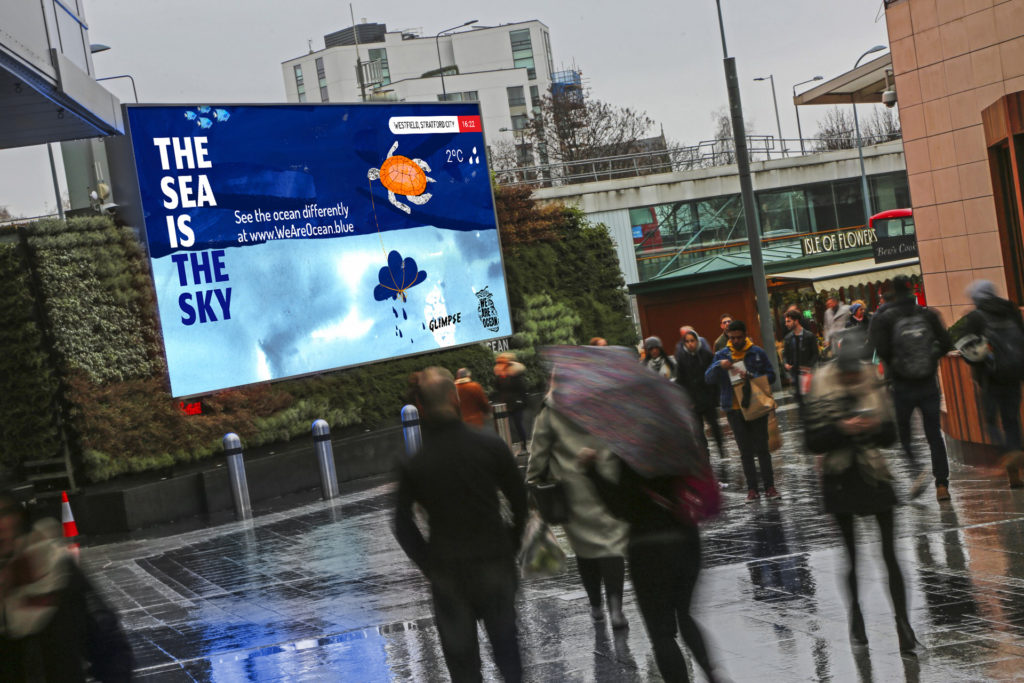 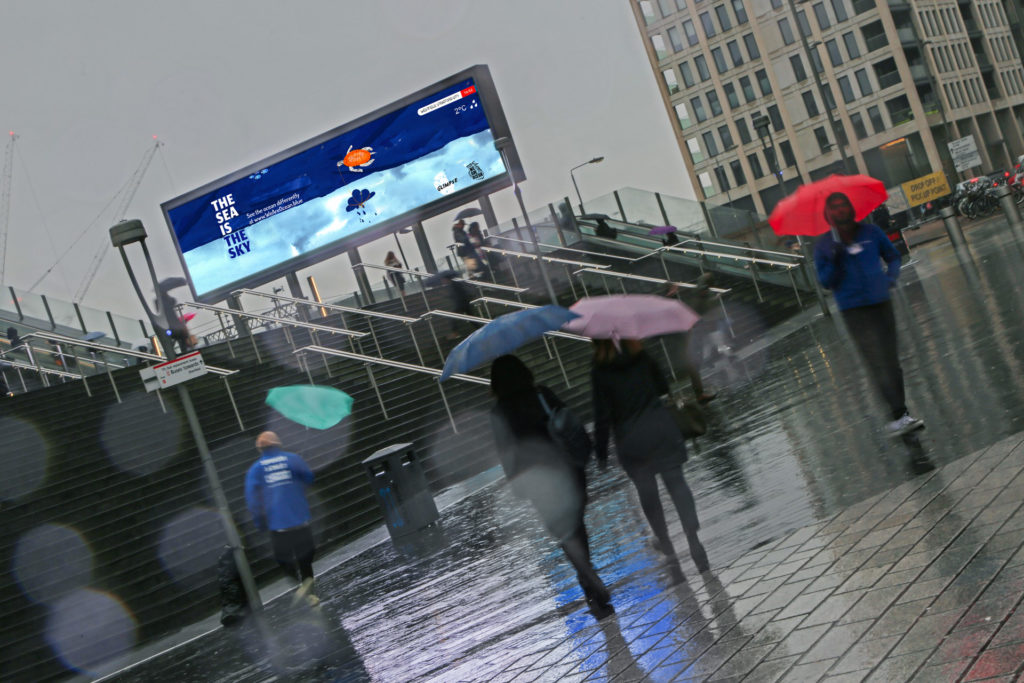 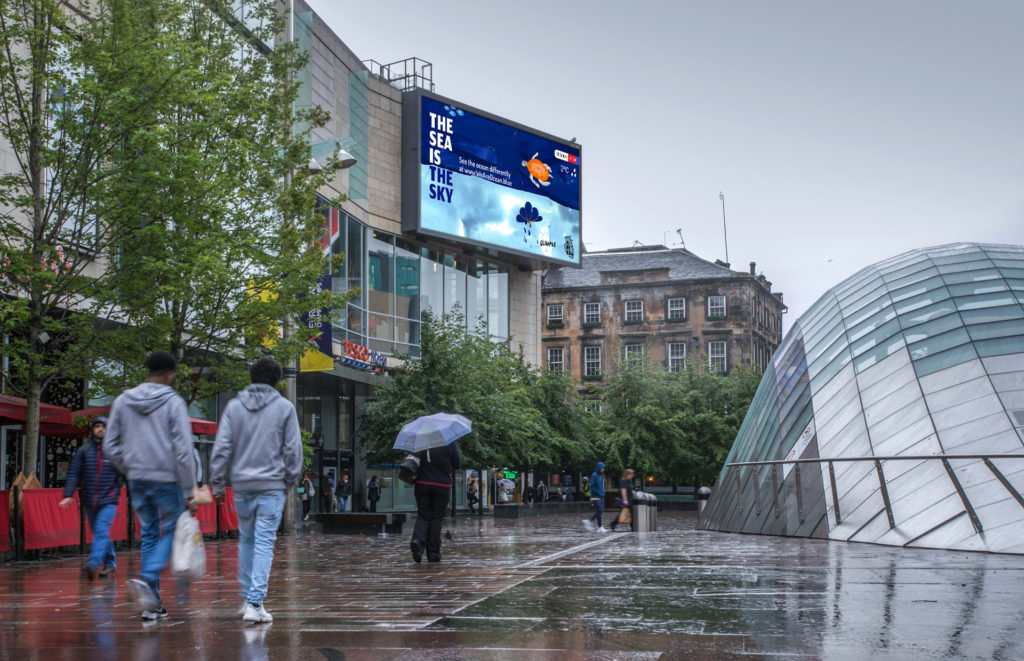 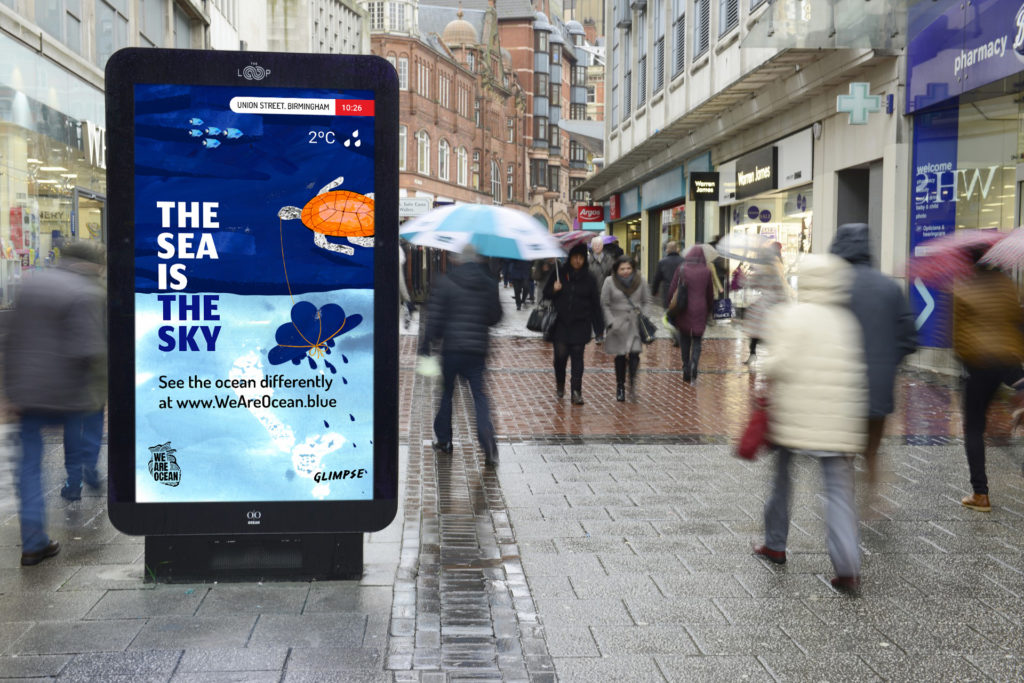 Glimpse and the not-for-profit collective We Are Ocean make a clever connection between cities and the seas in an out-of-home campaign which is triggered by rainfall from the ocean.

The Sea Is The Sky recalibrates the relationship between inland urban populations and the world’s oceans, using delightfully surreal animated scenes which are powered by live global weather patterns and the rain.

The Glimpse & DOOH.com campaign was a winner in  Ocean’s  annual digital creative competition which pushes the creative boundaries in digital out-of-home advertising.

The campaign breaks this week on six large format screens in London, Birmingham, Edinburgh and Newcastle and across the entire Loop networks in Manchester and Birmingham, coming to life across all Ocean screens only when it is raining.

The aim is to unlock community action to protect the planet’s oceans and marine life, by simply reminding people that the sea is the sky.

By making the ocean tangible no matter where you live, the collective wants to get people thinking “ocean” every time they feel the rain. In the UK, that’s 133 days a year—probably a lot more often than most of us currently think about the sea.

When it does rain, different animations are triggered, each depicting a rich variety of marine life in an upside down world with the sea at the top and the sky below. A team of marine life including an octopus, turtles, a hammerhead shark and an Arctic narwhal playfully tow rainclouds as they swim across the screen. Clownfish, rays and other species also appear swimming through the sea-sky scenes, making them full of life.

We Are Ocean  is a collective of charities and NGOs seeking to raise ocean literacy in the UK.

Dan Burgess from We Are Ocean said: “Most of us know the ocean is in trouble, but we live in inland cities, which feel worlds apart from the ocean. We love how this campaign uses something as everyday as rain to make the ocean tangible and improve ocean literacy, that is: understanding the ocean’s influence on us, and our influence on the ocean.”

Pete Ashworth, creative at Glimpse, said: “This campaign was a total collective effort, born from one of our hack days focusing on ocean literacy. Advertising steers culture and we can use that for good. Glimpse brings together great creatives to work on social and environmental causes and gets them to do what they do best – put a donk on things, to make people pay attention.”

The tin-foil turtles were created by Andrea Popyordanova, an illustrator based between London and Sofia who is currently studying an MA in Visual Communication at the Royal College of Art. The characters were animated by Charlotte Temple, who previously led design and motion for Cosmopolitan UK’s Snapchat Discover channel.

They were recruited from the Glimpse network together with DOOH.com who is co-ordinating the dynamic weather and location information which appears on the screens.

Jeremy Taylor, managing partner at  DOOH.com , said: “This lovely campaign is a superb example of how to use digital OOH properly. By marrying a visually compelling creative with a relevant contextual angle, it brings what is an important message to life beautifully. A fantastic use of the medium.”

Glimpse’s concept was a competition winner in a new award category which align brands or charities with Ocean for Oceans  , an initiative which uses Ocean’s screens to help stop single use plastic polluting the world’s seas.

Ocean head of marketing Helen Haines said: “This clever association between our cities and the sea is an imaginative demonstration of the creative and technical capabilities of digital out of home and its power to communicate a very important message. Glimpse has interpreted the brief beautifully, making it a worthy winner of our creative competition.”