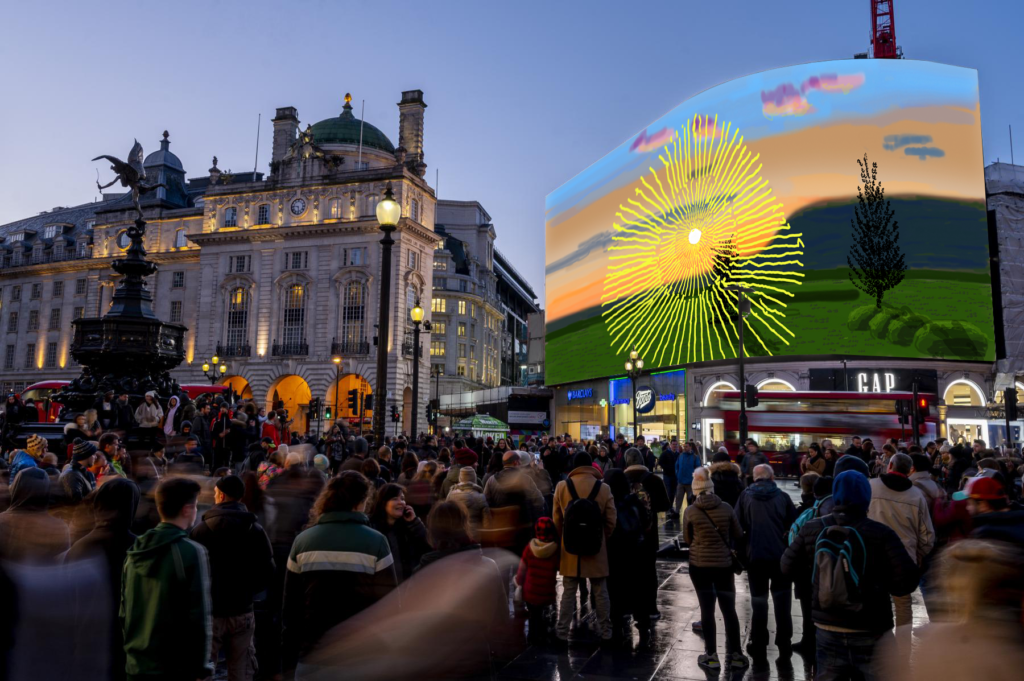 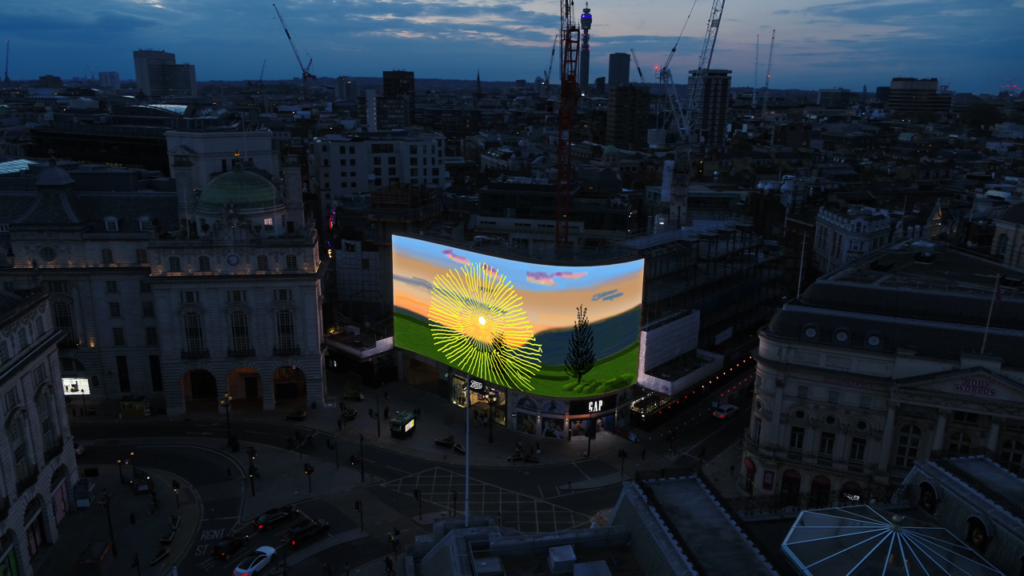 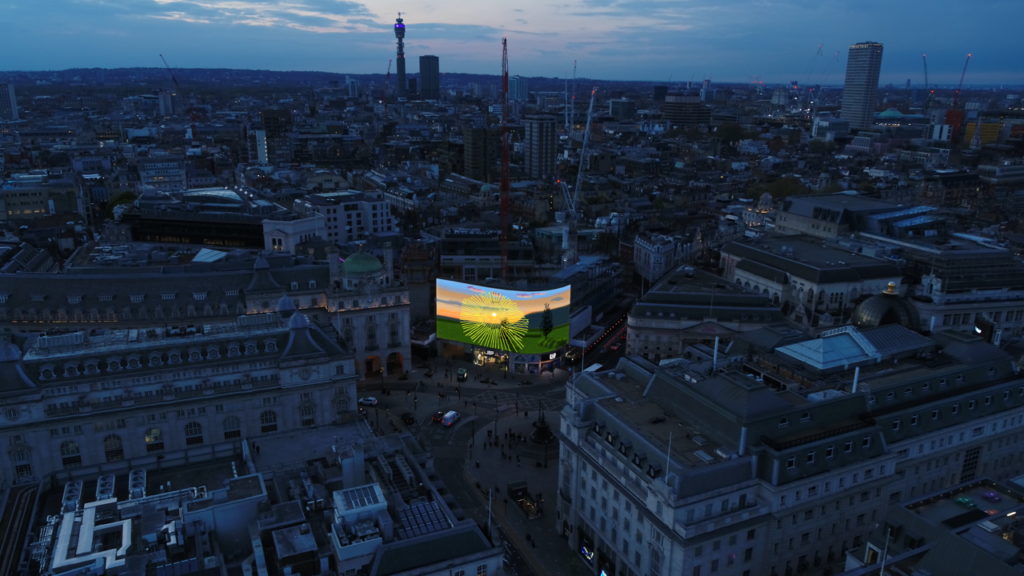 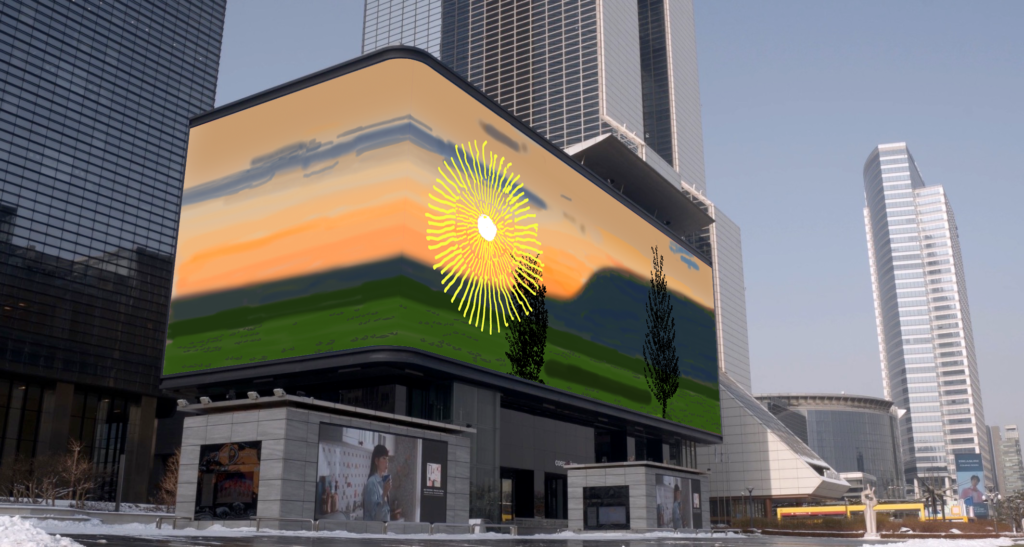 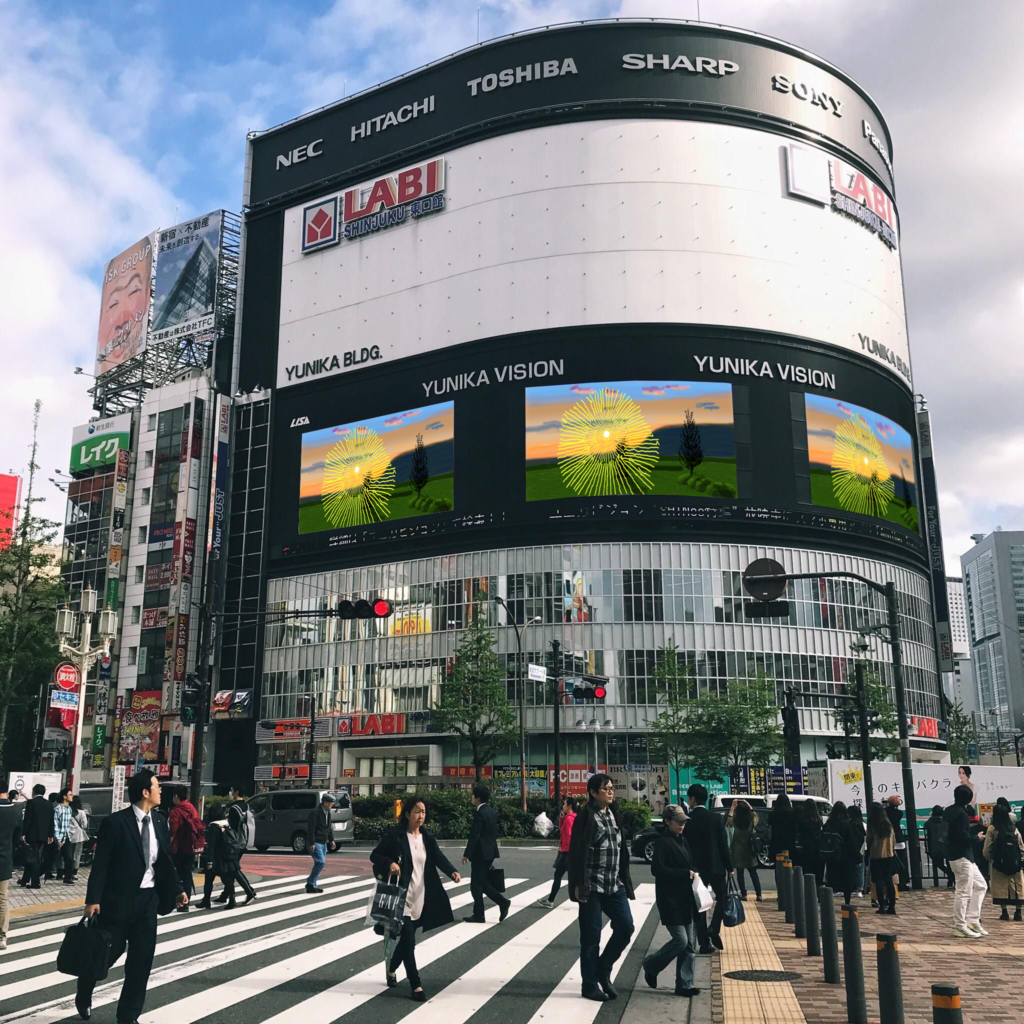 In a worldwide display of unity, London’s famous Piccadilly Lights unites with digital outdoor advertising landmarks in three other cities on Saturday, May 1 to present a new video work by David Hockney, one of the world’s most celebrated living artists.

Hockney has created a bespoke rendition of his animated sunrise, titled Remember you cannot look at the sun or death for very long, to be shown on the iconic Piccadilly Lights as part of Landsec’s partnership with CIRCA.

The artwork itself is two and a half minutes in length and the Piccadilly Lights broadcast will last for three minutes. Hockney’s new work will also be showcased on more than 70 billboards in New York’s Times Square; COEX K-POP Square, the largest LED Screen in Korea; and Yunika Vision in Japan.

The global collaboration is curated by Josef O’Connor, founder and artistic director of CIRCA, an innovative platform showcasing digital art in the public space via the Piccadilly Lights.

Hockney’s animated sunrise offers a powerful symbol of hope and collaboration as the world awakens from lockdowns. Members of the public living in London, New York, Seoul and Tokyo are given the opportunity for a spontaneous encounter with Hockney’s meditation on the arrival of spring.

Created on the artist’s iPad in Normandy, France, this global happening coincides with the release of Hockney’s new book Spring Cannot Be Cancelled and his Royal Academy exhibition The Arrival of Spring, Normandy, 2020 opening on May 23.

David Hockney said: “What does the world look like? We have to take time to see its beauty. That’s what I hope my work will encourage people to do when they see it on the large screens.”

Derek Manns, commercial media director for Landsec, said: “Piccadilly Lights is the beating heart of the UK and has been the voice of the nation for the past 12 months whilst the global pandemic has prevented so many of us from connecting, sharing and being with the people around us.

“This is a campaign filled with hope and beauty just as we start to emerge from lockdown. I can’t think of a better way to celebrate the reopening of London and other cultural destinations around the world.”

Josef O’Connor said: “There has never been a better time for this shining image of hope, which links people across borders and continents to celebrate the arrival of spring. We are especially grateful to David Hockney, a master in exploring the boundaries of new media, for allowing CIRCA to present his work in such a bold and democratic way, connecting Piccadilly Lights with screens all around the world.”

Norman Rosenthal, chairman of the CIRCA Council, added: “I love the idea of sunrise at sunset. It’s a profound idea.”

The new video will be shown every evening throughout the month of May at the following times and locations:

Visitors to Piccadilly Circus can connect their headphones to WWW.CIRCA.ART and receive a fully immersive audio-visual experience.  The website also streams the artwork every evening at 20:21BST and hosts supporting content alongside past archives of CIRCA commissioned work from artists including Patti Smith, Tony Cokes and Ai Weiwei.

Launched in October 2020, CIRCA is an ongoing project presented in partnership with Landsec which has donated its screen space as a helpful boost to the cultural scene in London’s West End.

Situated in the heart of London’s West End, the Piccadilly Lights is a single 783.5m2 screen, with a resolution 1.4 times greater than 4K, making it the largest advertising display in Europe. The iconic landmark is operated by Ocean on behalf of Landsec.

Created by artist Josef O’Connor, CIRCA commissions a different artist each month to present new ideas that consider our world circa 2021. Each artist is invited to create a new work for the Piccadilly Lights that offers an innovative and exciting way for people to engage with art, both outside and online, in a safe and socially distanced way. Hockney’s work will appear on the Piccadilly Lights at 20:21BST, a new time for 2021.

David Hockney (b. 1937) is one of the world’s most influential and celebrated living artists. From the 1960s, when he first burst onto the art scene in London, he has remained a significant force in the art world, not only for his paintings, drawings and printmaking, but also for his interrogation of photography and new media in addition to stage design. Long associated with recording life in Los Angeles, the past two decades have seen a re-engagement with the European landscape and the natural world.

In 2009, David Hockney began expanding his practice from a decades-long reliance on analogue mediums to that of iPad drawings. What began as drawing with his thumb on an iPhone quickly shifted to drawing with a stylus pen on the newly released iPad: “There was great advantage in this medium because it’s backlit and I could draw in the dark. I didn’t ever have to get out of bed.”