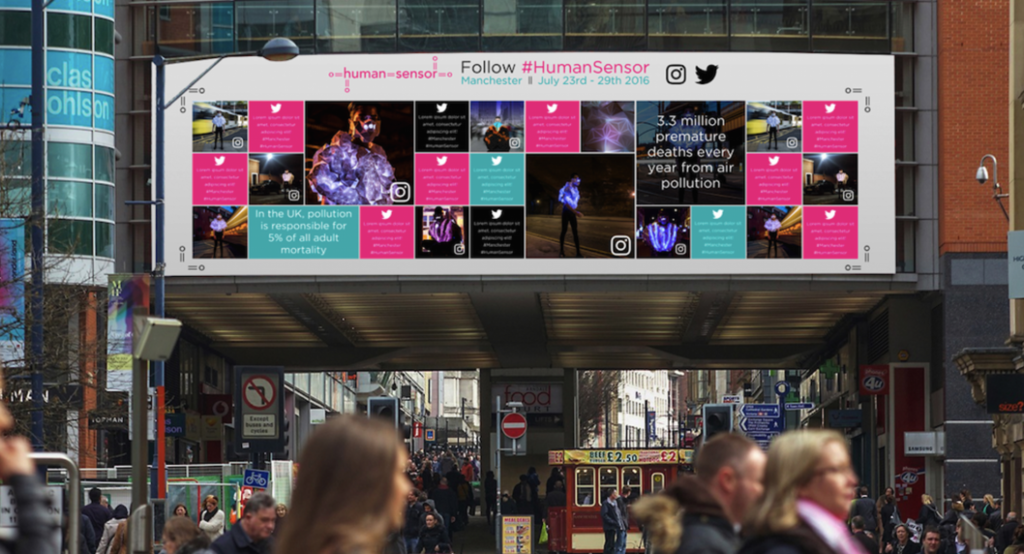 In a partnership with Manchester, European City of Science and Invisible Dust, producers of Human Sensor, Ocean will curate user generated content created during a series of live performances in the City which will reflect how the population is affected by air quality.

During the shows, performers will model hi-tech clothing which is designed to reveal the presence of invisible pollutants to audiences during walks around various Manchester locations. Each walk culminates in a choreographed performance in Sadler’s Yard, NOMA.

The performances mark the culmination of several months of research by the artist, scientist Professor Frank Kelly and partners, and could lead the way in clothing design amongst urban populations around the world.

Ocean will feature #thehumansensor across The Loop city centre network of wifi enabled screens from July 18th, curating social media walls ahead of the performances on The Printworks and The Screen @Arndale screens from July 23 to July 29.

Social media content will be managed by Ocean’s mobile partner, Wayin.com, who will moderate online conversations via Twitter and videos and images uploaded to Pinterest, Instagram and other channels as they appear across out of home screens.

Ocean head of screen investment Kevin Henry said: “Through its eye-catching visual performance, The Human Sensor lends itself to curated user generated content from the audience. This will be harnessed by our wifi enabled screens to create a collage of photographs and video which reflect the power of the project both within Manchester and to a wider audience outside of the city.”
Alice Sharp, director and curator said:  “Invisible Dust are delighted to work with Ocean and Wayin on this exciting opportunity that will drastically increase the reach, engagement and impact of Human Sensor.  When I founded the organisation I named it ‘Invisible Dust’ and our mission is to make the invisible visible.  We have been raising awareness about dangerously high levels of air pollution for nearly 10 years. I’m very happy the message is finally hitting home and that the world is beginning to wake up to this environmental challenge.”