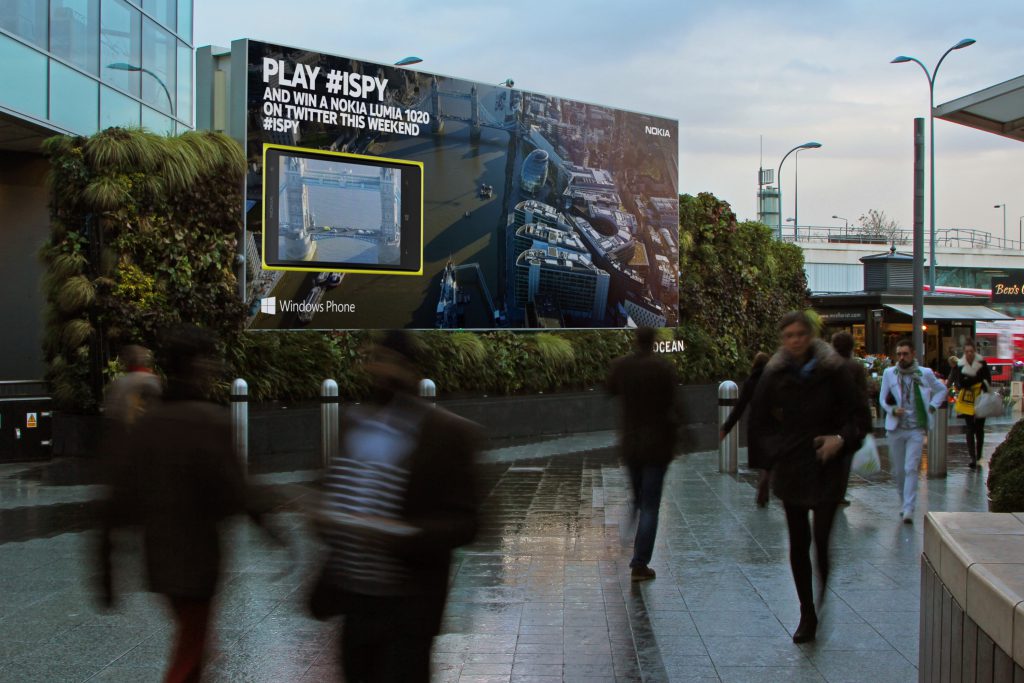 Activity centred on the domination of Ocean’s Eat Street screen at London’s Westfield Centre when people were invited to guess the names of a series of notable landmarks and sites featured on the full motion screen.

The digital #iSpy game, created by Twitter, won one of the top prizes in Ocean’s annual Art of Outdoor competition which challenges brands and agencies to push the boundaries of digital outdoor.

Live tweets broadcast on Ocean’s full motion Eat Street screen gave clues to a series of famous pictured locations. Players used their mobiles to guess the object via their Twitter account, with selected online Tweets featured on the screen as they were made. More than 75 per cent of UK Twitter users are active on mobile.

Pictures of locations used the Nokia zoom function to hone in on the featured sites, helping players with their guesses. Those who answered correctly had a chance to win a Nokia 1020.

Darryl Mckay from Nokia said: “Our modern take on one of the world’s most popular games is a highly creative and clever way for us to communicate the social functionality and technical innovation of the Nokia 1020. This campaign allows us to put the product in people’s hands at scale, literally showing the zoom.”

Ocean’s Head of Marketing Helen Beacham said: “It’s a great piece of work which demonstrates the simplicity and ease of using digital outdoor, mobile and social media together to amplify and extend creative campaigns.”

Bill Giouroukos, Westfield’s Director of Operations and one of the Ocean judges, said: “Westfield’s media partnership with Ocean is once again adding a new dimension to the shopper experience. Westfield is a big believer in the role technology is playing in people’s daily lives particularly when it allows brands to engage directly with our customers in such clever and unexpected ways. With over 27 million visitors to Westfield London last year, brands are taking advantage of this reach and creating bespoke feature activity specifically for our customers.”