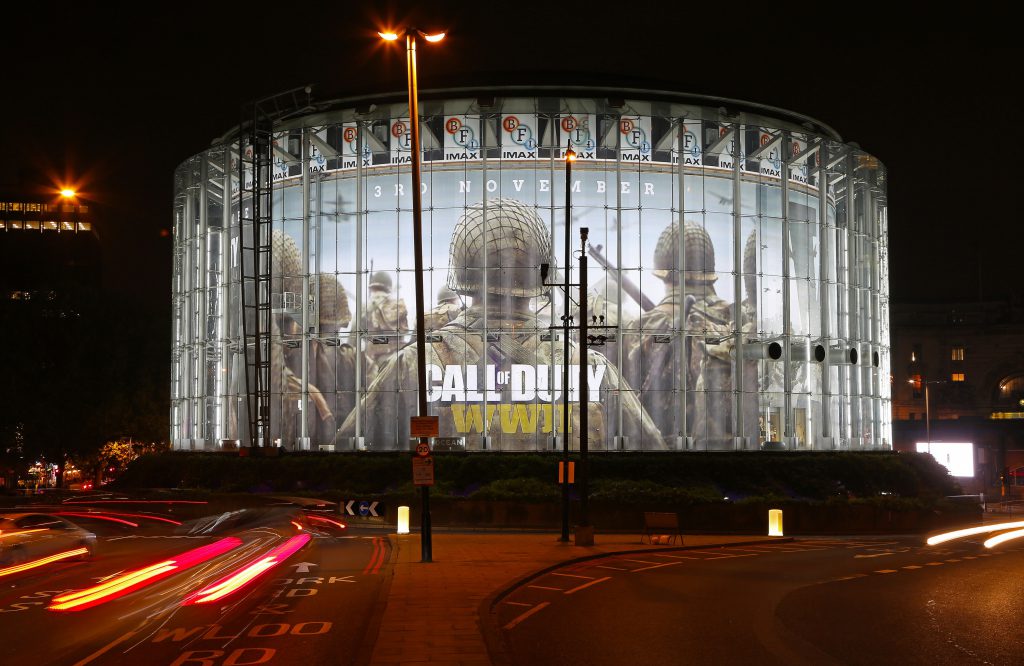 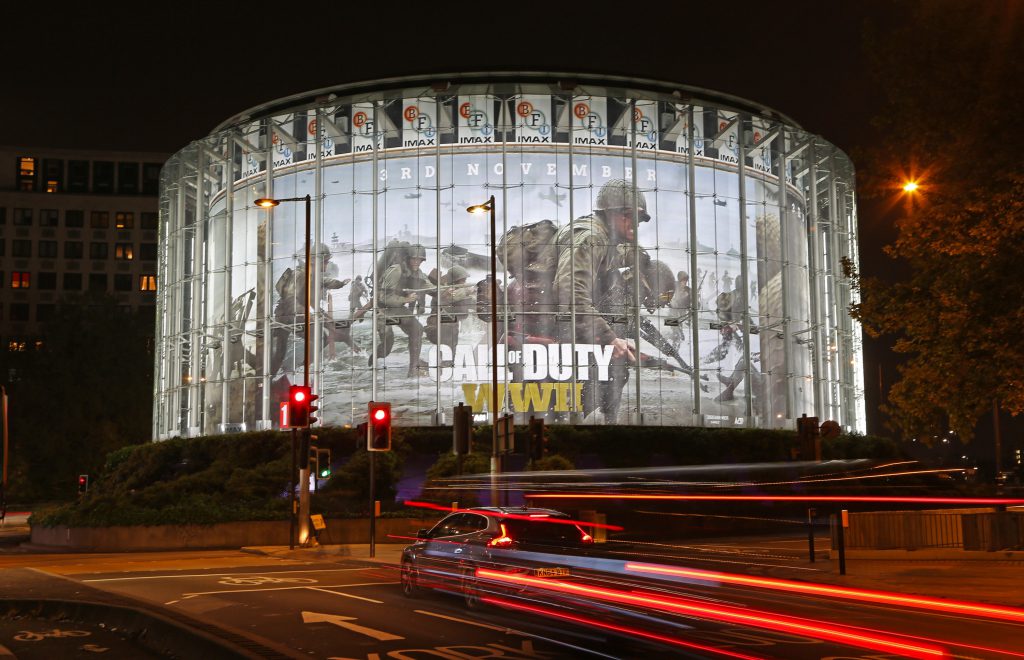 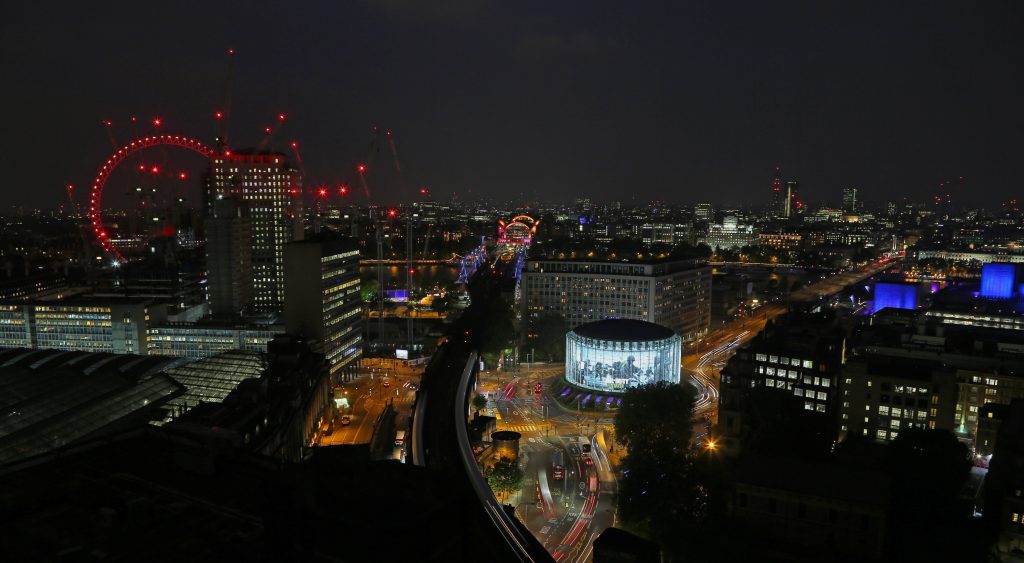 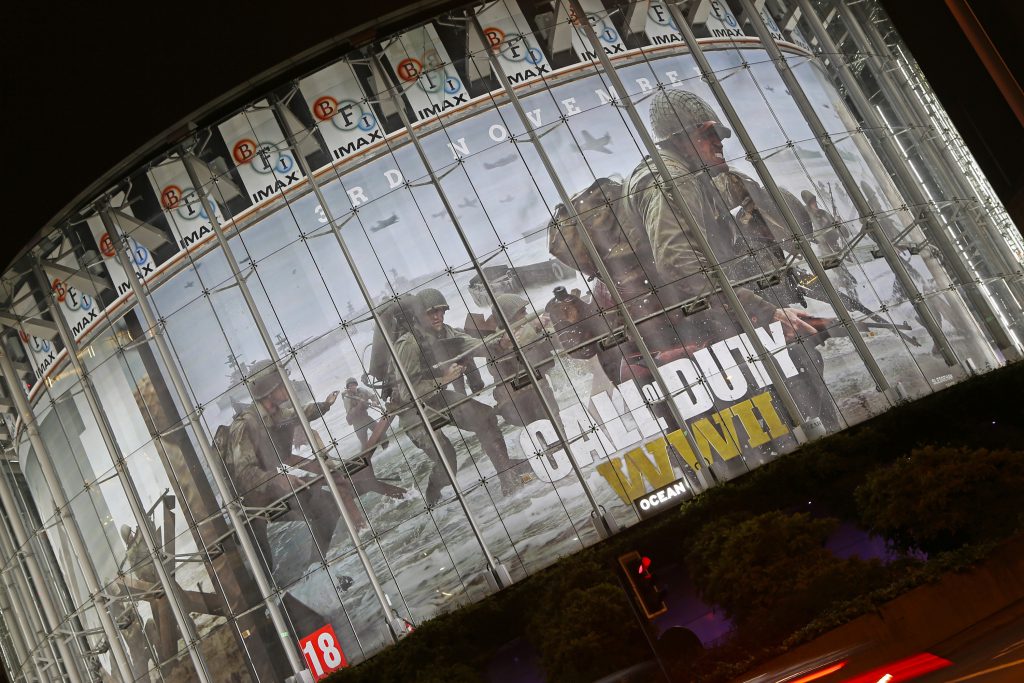 Anyone passing London’s IMAX theatre at the beginning of May couldn’t fail to spot the dramatic images of World War II troops in full combat gear dominating all 1,734 square metres of advertising space that is the iconic Waterloo landmark.

To build anticipation and pre-orders ahead of its November launch, Activision and Sledgehammer occupied the IMAX in London for the worldwide launch of Call of Duty®: WWII, continuing one of the world’s most successful video game series.

Inside the BFI venue, the game was fully unveiled to the world in a live stream to 23 odd countries, the first opportunity for global fans to get an initial glimpse of the highly anticipated boots on the ground blockbuster.

Edison lighting takes the biggest banner in Europe to a totally different level, creating a truly unique, 360 degree display. 51,000 LEDs are integrated inside the glass surrounding the circumference of the venue, projecting onto the artwork skin. The LEDs are arranged in segments, each of which can be individually programmed to change in colour, intensity and speed in a bespoke sequence to enhance any brand creative.

Edison is about creating a step change in a high impact advertising environment and here’s the reason why.

Independent research verifies that the most iconic out of home sites have a powerful priming effect not just on other OOOH sites, but on the rest of the media plan too. And neuroscience shows that the most spectacular sites evoke an even stronger emotional response. As a result, the message or campaign carried is better encoded into the memory.

It’s what we’ve coined the Wow! effect. And Call of Duty® on London’s IMAX delivered that in spades.

Generating a response on this scale remains the one, incredibly simple reason why spectacular out of home has to be central to any client campaign.

You can read more about the science behind the priming effect here.

And over 18 gamers can watch the Call of Duty® trailer here.