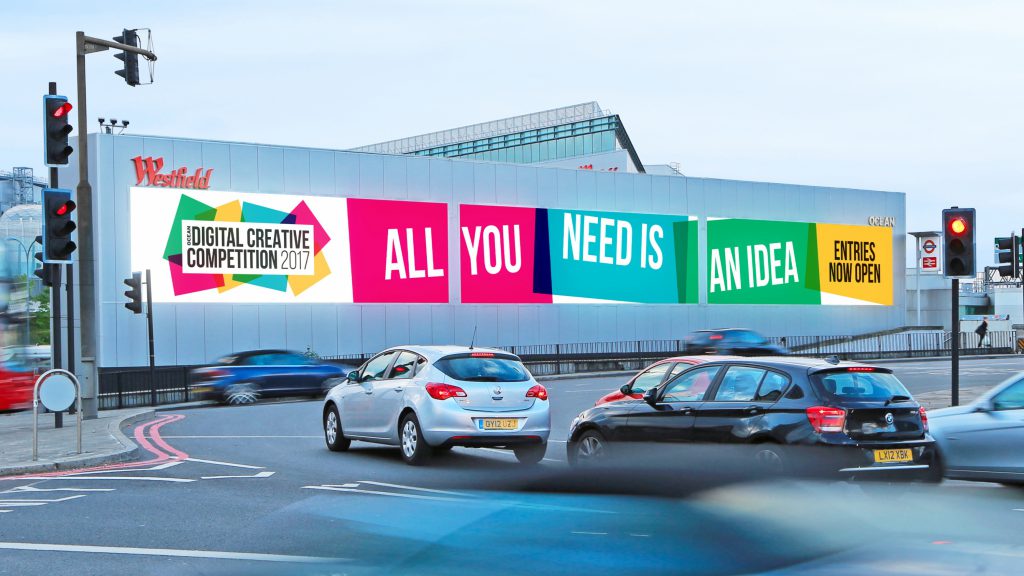 Ocean have launched its 8th annual competition to discover the best creative ideas in DOOH, using innovative and emerging technology and techniques.

Campaigns can be devised for either UK audiences, or to reach much broader global audiences spanning three continents (Europe, North America and Asia).

This year, to encourage simple and effective creativity, there’s a single category of entry, although submissions for charities and commercial brands will be judged and awarded separately by a panel of industry experts.

Entrants that truly raise the bar will win a share of a £650,000 prize fund and the chance for their creative concepts to be showcased across Ocean’s iconic UK DOOH locations, or via The Alliance network to Europe (Madrid), the USA, the Middle East (Dubai) and the Far East (Hong Kong or China).

Announcing the 2017 awards, Ocean CEO Tim Bleakley said: “Ocean’s annual competition has consistently challenged creative thinking within the all screen market, consistently raising the bar for what is possible over the past eight years.

“It has provided a platform for brands to succeed at global awards ceremonies such as the distinguished Cannes Lions, delivering inspired ideas and aligning creative minds to the opportunities digital out of home affords alongside other progressive platforms and content channels.

“Last year’s winners created some show-stopping media moments on a UK and an international scale. Entering the competition is simple but the rewards are multiple. All you need to compete is an idea.”

It is free to enter Ocean’s competition, which is open until August 25. The winners will be announced at a prestigious awards ceremony at the IMAX in London on October 5.

All you need is an idea

In 2017, Ocean celebrates the 8th anniversary of a competition that has consistently educated and helped drive the DOOH success story. The initiative reflects Ocean’s ethos to stimulate technical understanding and creative exploitation of the medium and with it, drive sector growth and brand count.

Last year’s winners included Churchill Car Insurance with Churchie’s Drive-Thru created by WCRS and the spectacular March for Giants, created by 18 Feet & Rising for the charity Space for Giants.

Ocean’s competition has powered global success stories for visionary brands and agencies who have shown the world how DOOH is closely aligned with other progressive technologies in the screen world and fully integrated with capabilities such as wifi, augmented reality, 3D modelling and audience and vehicle recognition.

Find out more at http://www.oceanoutdoor.com/dcc