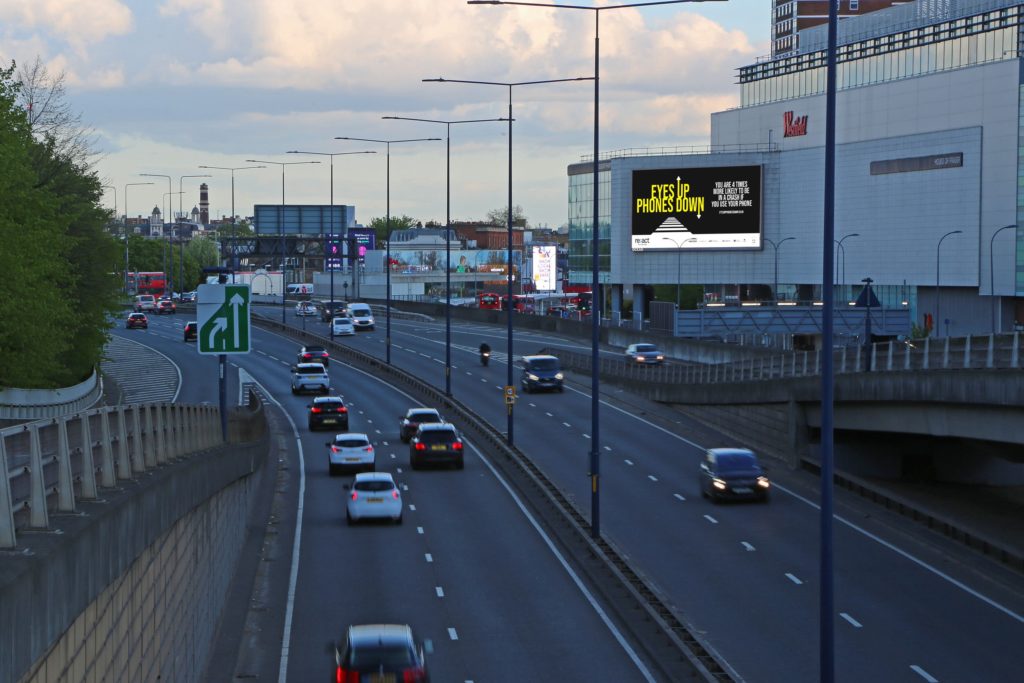 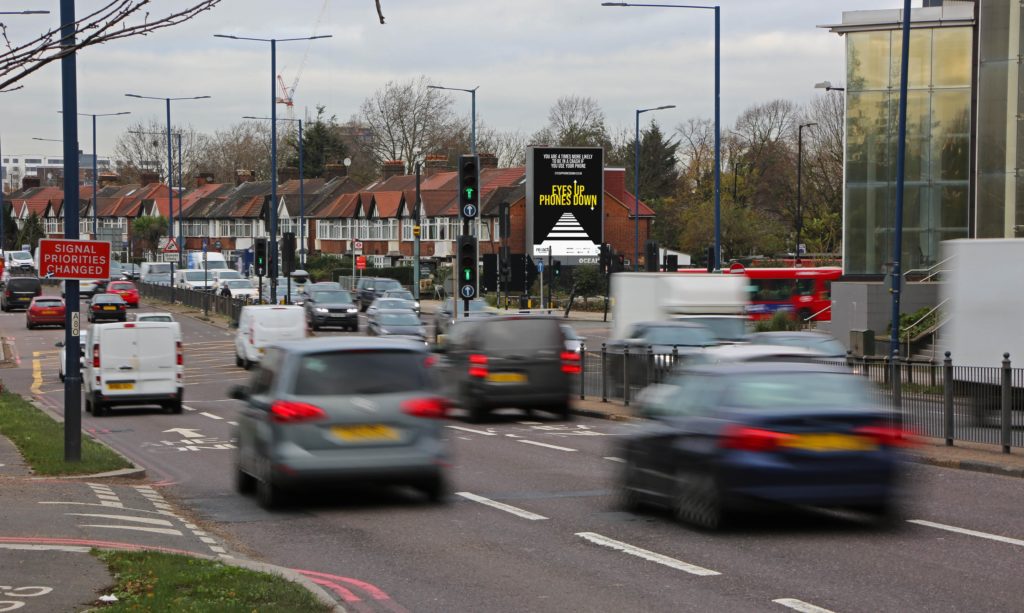 The ‘Eyes Up, Phones Down’ campaign was created by graphic designer Reana as part of the Re:act road safety behaviour change programme to highlight the road safety topic of distraction.  Her campaign is appearing on the busy A40 at Gypsy Corner and at Westfield London.

The annual Re:act programme challenges university and college students to create a behaviour change campaign that raises awareness among 18 to 25-year-old road users of a critical road safety issue where they are over-represented.

An initiative of creative behaviour change agency Hard Edge, Re:act has expanded internationally, running in London through LCC with the support of industry partners, including FIA Foundation, Zurich and Transport for London.

Andrew Hardwick, Re:act and Hard Edge founder, said: “It is fantastic that after the challenges of the past year, this Re:act London campaign has finally been launched, particularly at a time when attention turns to the importance of road safety.

“It is thanks to the generosity and support of Ocean Outdoor, and the continuing commitment of Re:act’s programme partners, that this is able to come to fruition.”

Reana said: “I am so excited and grateful that my work is on billboards in London. It is amazing to see my campaign around London and hopefully this will bring more awareness to distraction on our roads and how important road safety really is.”

Ocean’s chief revenue officer Nick Shaw said: “Ocean’s screens are part of the fabric of the communities and cities where we operate. Road safety is an incredibly important issue and we are pleased to support this campaign which will reach literally thousands of young people on the streets where it matters most. Congratulations to Reana and all the other students who took part in Re:act.”

This year’s Re:act competition has now closed and the winning campaign will feature on Ocean screens this summer.

FIA Foundation media and public affairs manager Kate Turner added: “The FIA Foundation is very pleased to support the Re:act programme which has engaged a creative cohort of students at LCC to consider the challenges of and solutions to the risks on London’s roads.

“Young people across the world are leading the call for safer streets, holding up a mirror to show decision makers and society that the status quo, where road injury is the leading cause of death from the ages of five to 29, is unacceptable. It is fitting the ‘Eyes Up’ campaign launches during UN Global Road Safety Week to support the call to action to deliver streets for life.”