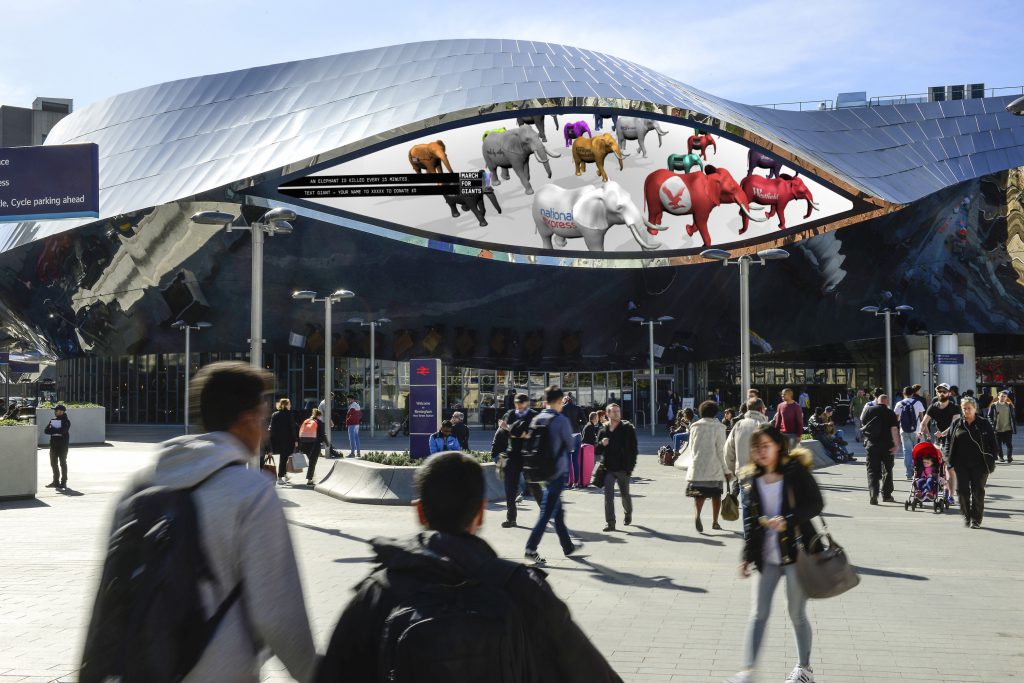 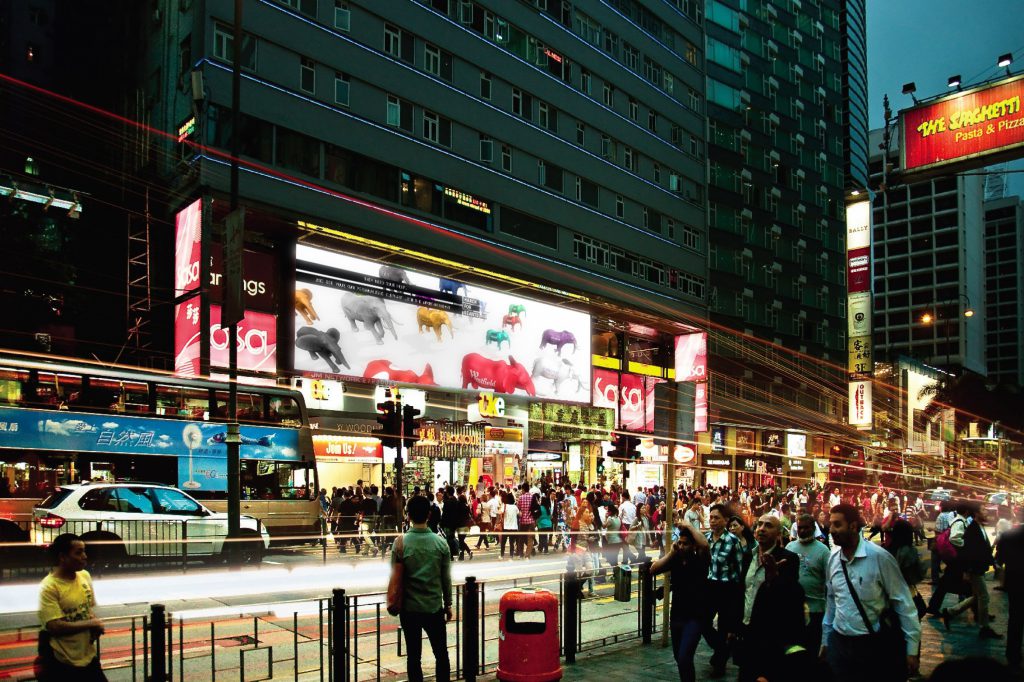 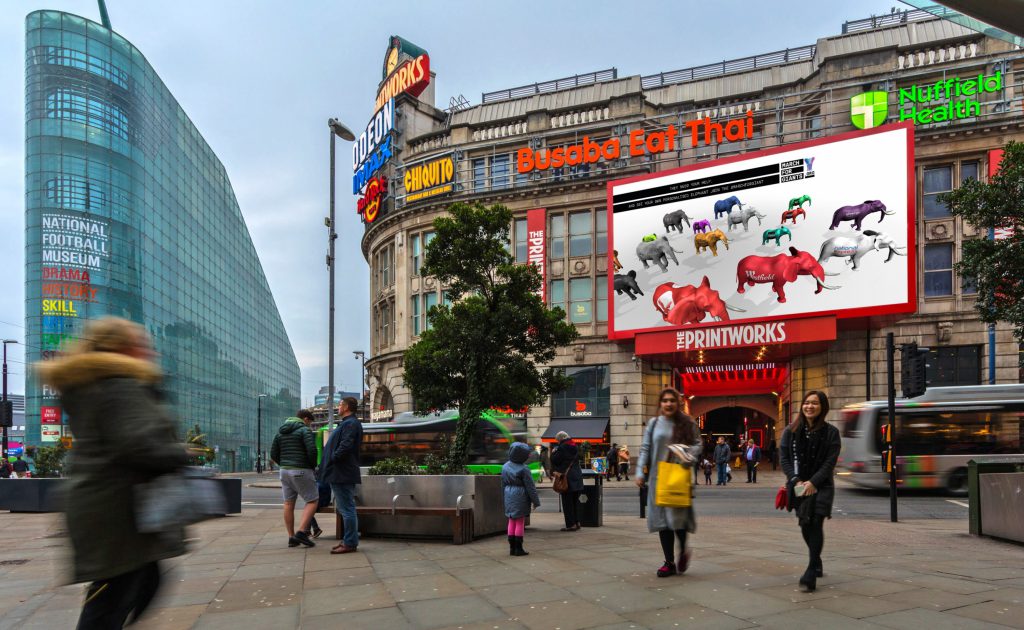 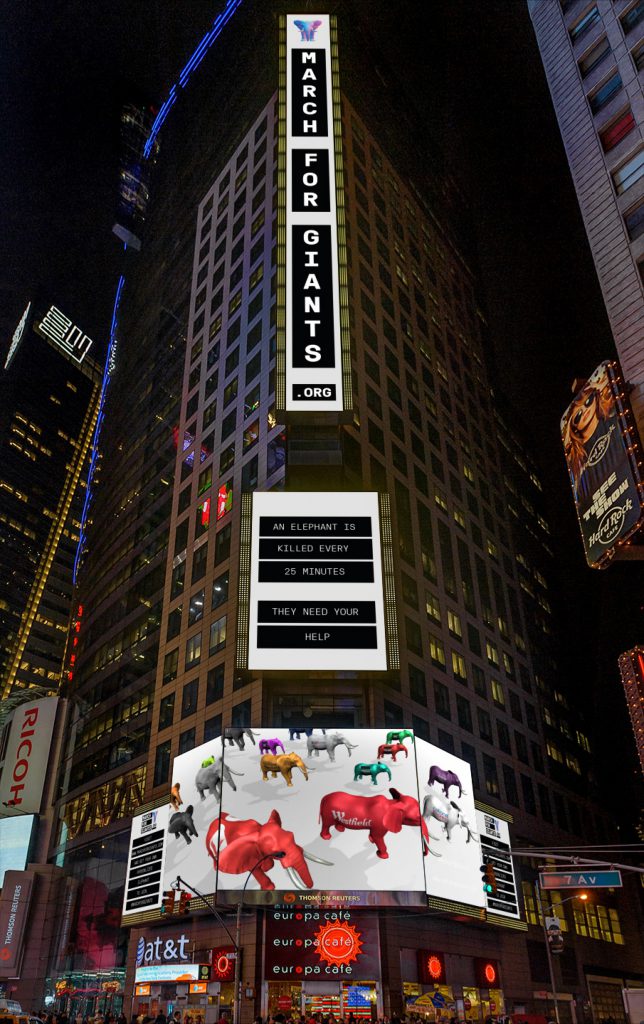 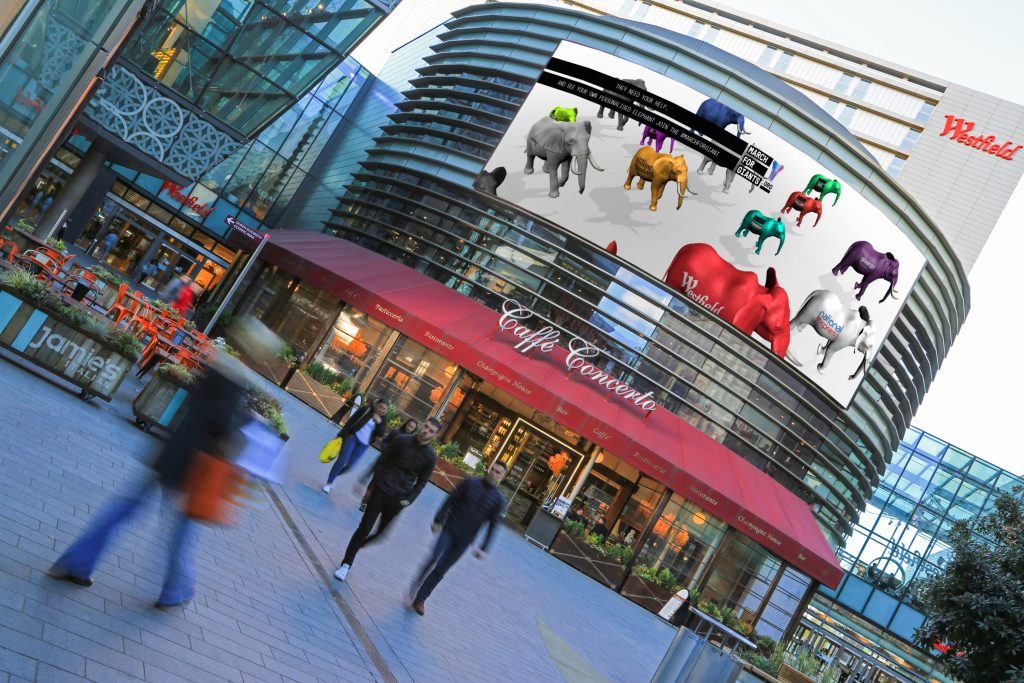 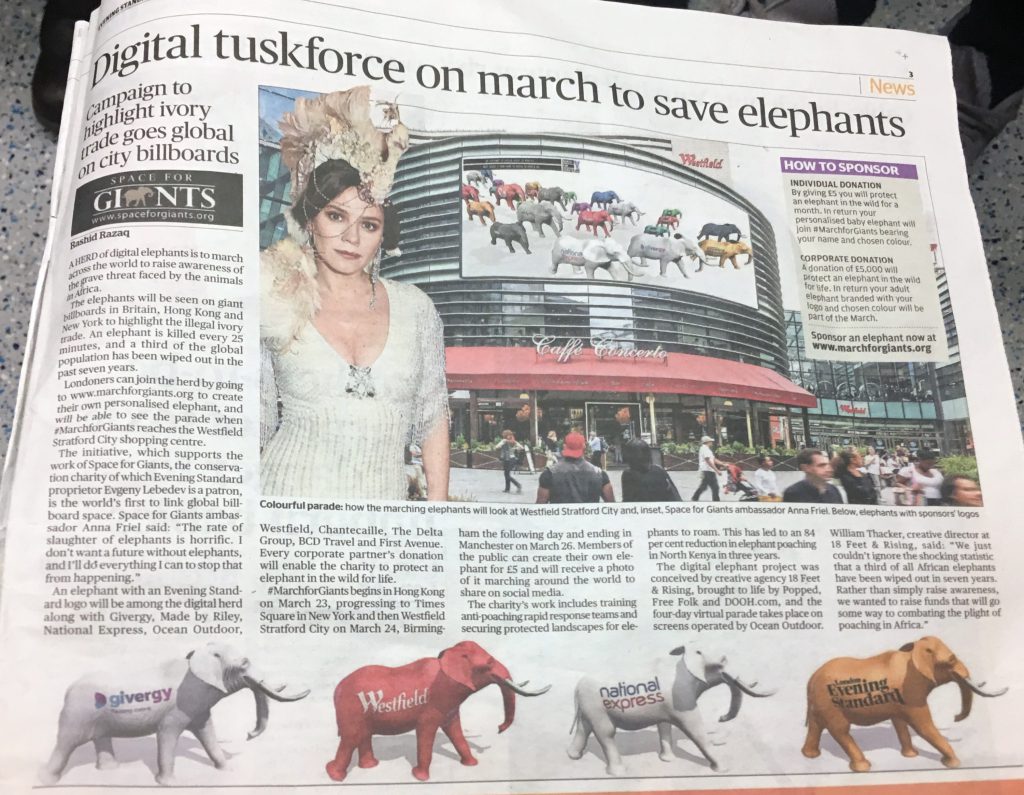 A herd of digitally-generated 3D elephants is about to march across the world, crossing three continents in a spectacular first for digital out-of-home campaign to end the slaughter of endangered animals in Africa.

Powered by Ocean and created by 18 Feet & Rising, March for Giants begins in Hong Kong on March 23, progresses to New York and then continues to London on March 24, reaches Birmingham the following day and ends in Manchester on March 26.

The four-day march mobilises public and corporate power by inviting companies and individuals to generate their own branded adult and baby elephants to join the herd as it marches in real time.

Corporate donors can create their own elephants decorated with their logo and brand colours for £5,000, the amount it costs to protect an elephant for life in the wild in Africa. Individuals can name a baby elephant for £5, or sign up for a £5-a-month year-long donation, which protects an elephant for one year.

The virtual herd will be created and grow online during March before being released across five giant digital out-of-home screens operated by Ocean and its Alliance partners.

The herd takes 80 minute dominations in Hong Kong and New York and features across the UK screens for three days.

The campaign supports the work of the conservation organisation Space for Giants.

Poachers, mostly supplying Asian demand for ivory, killed close to 150,000 African elephants in the seven years to 2014, reducing the overall population by a third. That equated to an elephant being killed every 25 minutes every day of every year from 2007 to 2014.

The campaign transcends international borders to appear across some of the world’s most prominent and impactful digital OOH media spaces: Tsim Tsa Tsui in Hong Kong, Times Square in New York City, Westfield Stratford City in London, The Media Eyes at Grand Central in Birmingham and the Manchester Printworks.

Corporate donors that have already signed up to the March include National Express, Givergy, Made by Riley, The Delta Group, Westfield, Chantecialle, BCD Travel and First Avenue.

The March for Giants was an international winner in Ocean’s annual creative digital competition, which sets out to push the creative and technical boundaries in digital out-of-home.

William Thacker, creative director of 18 Feet & Rising, approached Space for Giants after the shocking results of the 2016 Great Elephant Census reported that a third of all African elephants have been wiped out in the last seven years.

“With the 2016 Ocean Outdoor competition open, we saw an opportunity, and real possibility, of securing some global media on a scale significant enough to make a difference to an extremely serious and unreported issue,” said Thacker.

“As a B-Corporation, our first thought was how we could mobilise and unite brand and public power, equally, for good. Rather than simply raise awareness, we wanted to raise funds, funds that will go some way to combating the blight of poaching in Africa.

“Starting from Space for Giants’ fundraising webpage, we have developed an online campaign hub that will stream to our media inventory, and reward engagement in real time – whether sat at home, on your commute, or stood in front of one of our DOOH spaces around the globe.”

Each elephant will be decorated in corporate liveries and donors’ names, all supported in social and broadcast media by a network of celebrities, social influencers and international news networks across the globe.

Thacker said: “We’ve been humbled by the amount of support we’ve received from some very passionate, talented and selfless people. People who have given up their time, resource, contacts, influence and most importantly their creative know-how and energy to support a cause and creative concept we all believe in. Big shout outs must go to Popped, Freefolk and DOOH.com: without these guys working tirelessly, and at their own expense, this project simply would not have been possible.”

Max Graham, CEO of Space for Giants, said: “We’re racing to protect as many elephants as we can from both poaching and the loss of habitat, which are massive, expanding, and urgent threats to the survival of these iconic animals in the wild. It’s already that serious.

“Space for Giants has a proven toolkit of tactics to protect elephants, and March for Giants will allow us to put those methods to good use in many more places. It’s a huge boost to have elephants at the centre of this innovative, brilliant campaign, and it’s inspiring to see some of the world’s most recognisable companies and brands already signing up. They clearly see the urgency here.”

Ocean CEO Tim Bleakley said: “To see this march of virtual elephants unfold across the world is a massive idea made possible by an incredible team. It’s never been attempted before and we urge everyone who can to get behind it. The creative concept and the cause are worthy winners of our creative competition.”

You can generate your elephant here:
www.marchforgiants.org