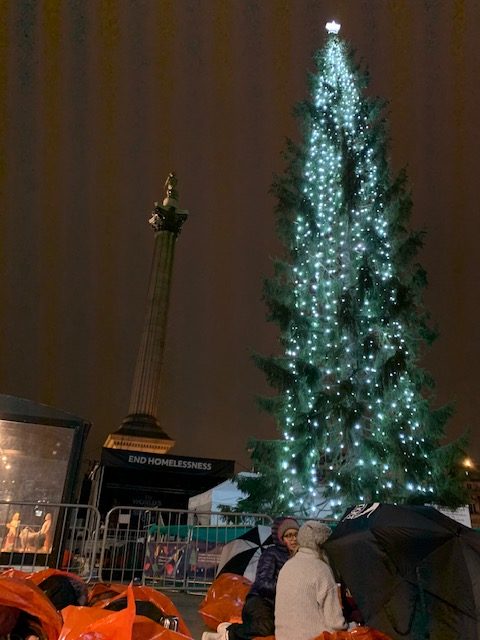 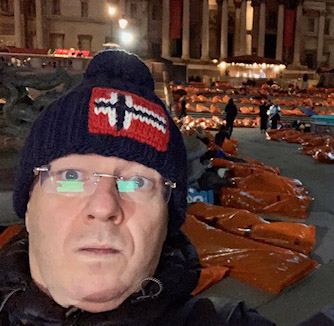 Ocean CEO Tim Bleakley joined 60,000 other people in 52 other cities across the world who gathered together in a display of global solidarity with those affected by homelessness and displacement last weekend.

In the run up to The World’s Big Sleep Out which was on December 7, Ocean donated £130,000 of out of home air time across its digital advertising screens in Birmingham, Glasgow and London, supported by a cash donation to the cause.

The event aims to shine a light on those who find themselves in desperate situations and without the security of a roof over their heads.

In London’s Trafalgar Square, Tim and his daughter joined other fundraisers who had volunteered to sleep rough in the open air equipped with only a sleeping bag and a bivvy bag, but no cover or shelter. They were met by bitterly cold temperatures and lashing rain for two and a half hours during the course of the Big Sleep Out.

“At 6.30am we were woken up and asked to go,” said Tim. “There was no camaraderie, no watching the sunrise together over Nelson’s column. The point is we slept rough, we woke up miserable and we were moved on – and that’s what’s happening to the homeless on the streets day in day out worldwide.”

Tim was inspired to take part by his son, Jack, who created an interactive art installation for his dissertation while studying at art college. The brief was to change negative, cliched perceptions of homeless people in Vancouver.

The young designer asked homeless people to take photographs of their own possessions and then projected a video montage of their pictures onto a tent made of tracing paper. Jack’s award-winning work included an original soundscape of the harsh night-time city streets which he recorded at the homeless encampment.

So far, the World’s Big Sleep Out has raised an astonishing $10million and further contributions are being taken until Christmas Eve.

The campaign was founded by Josh Littlejohn, who started the sandwich shop Social Bite in Edinburgh to offer employment to homeless people.