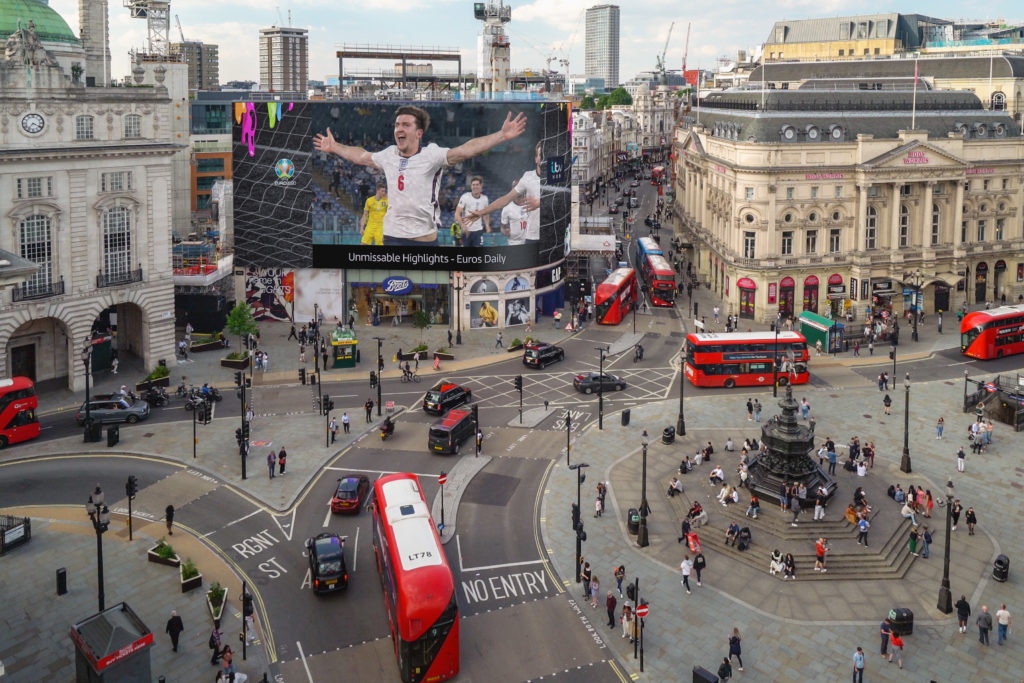 Ocean has struck a deal with ITV Sport to carry highlights from the UEFA Championship Euro2020 games on the iconic Piccadilly Lights advertising screen in London.

Highlights of every game, from the quarter finals to the finals, including England’s 0 – 4 win over Ukraine will appear on the landmark display in Piccadilly Circus in three bursts over six days  – July 6 -7, July 9 – 10 and July 14 – 15.

On those days, the schedule of the famous screen will switch to 10 minute dominations at 1pm, 5pm and 8pm, giving sports fans a second chance to enjoy the best football action as the tournament reaches its exciting crescendo at Wembley stadium.

Ocean head of content and sponsorship Kevin Henry said: “The Piccadilly Lights is an iconic canvas on which to replay the action and join the euphoria of the Euros. Our ongoing partnership with ITV Sport strengthens Ocean’s credentials as a sports and entertainment broadcast channel, bringing world class sport to outdoor audiences in premium handpicked environments.”

The Piccadilly Lights is operated and marketed by Ocean on behalf of Landsec.

Ocean’s summer sports schedule continues at pace with live coverage from Wimbledon as part of its partnership with The All England Lawn Tennis Club appearing on screens at Westfield London, daily highlight clips on more than 35 large format screens throughout the UK between June 28 and July 12 and 10 minute dominations on the Piccadilly Lights until July 11.

Westfield London is also the location for Ocean’s Team GB official Fan Zone throughout the Summer Olympics in Tokyo as part of the company’s media partnership with Team GB, Eurosport and the BBC.