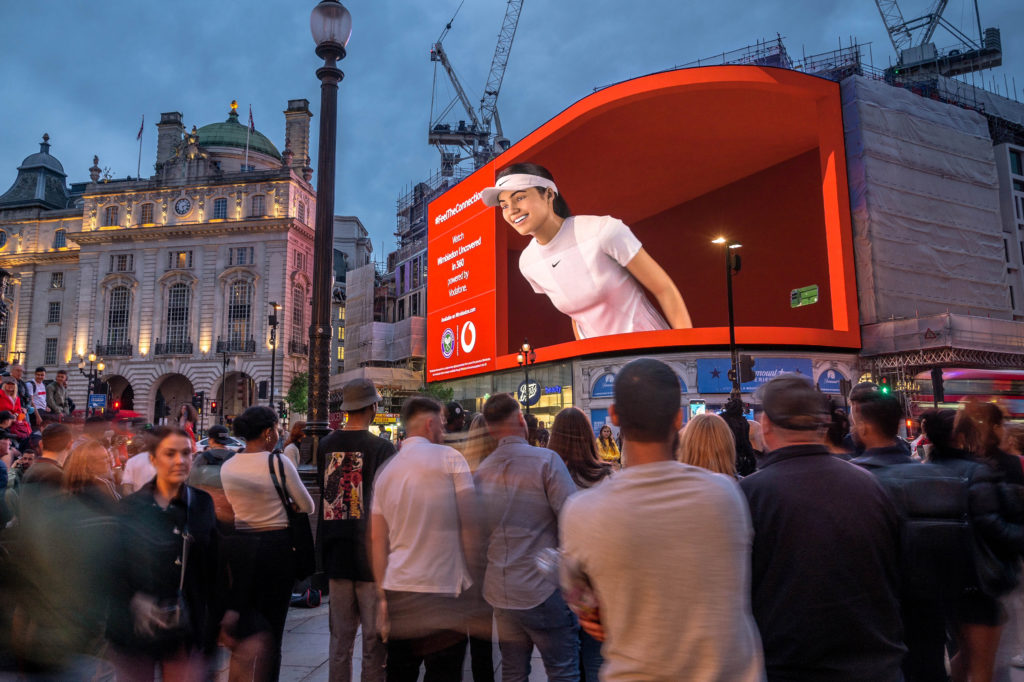 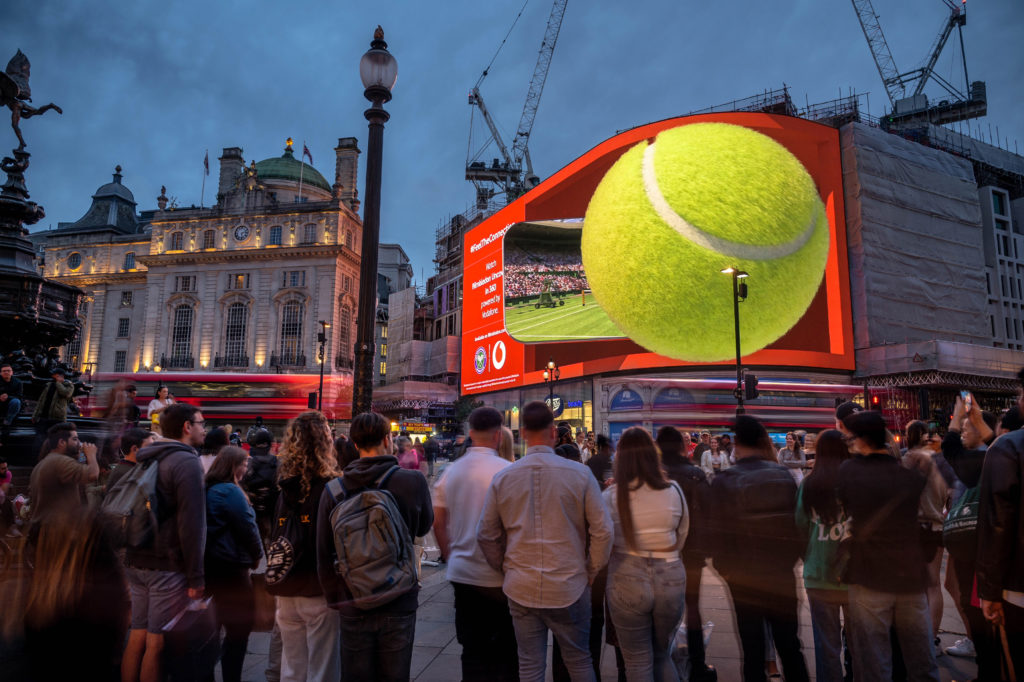 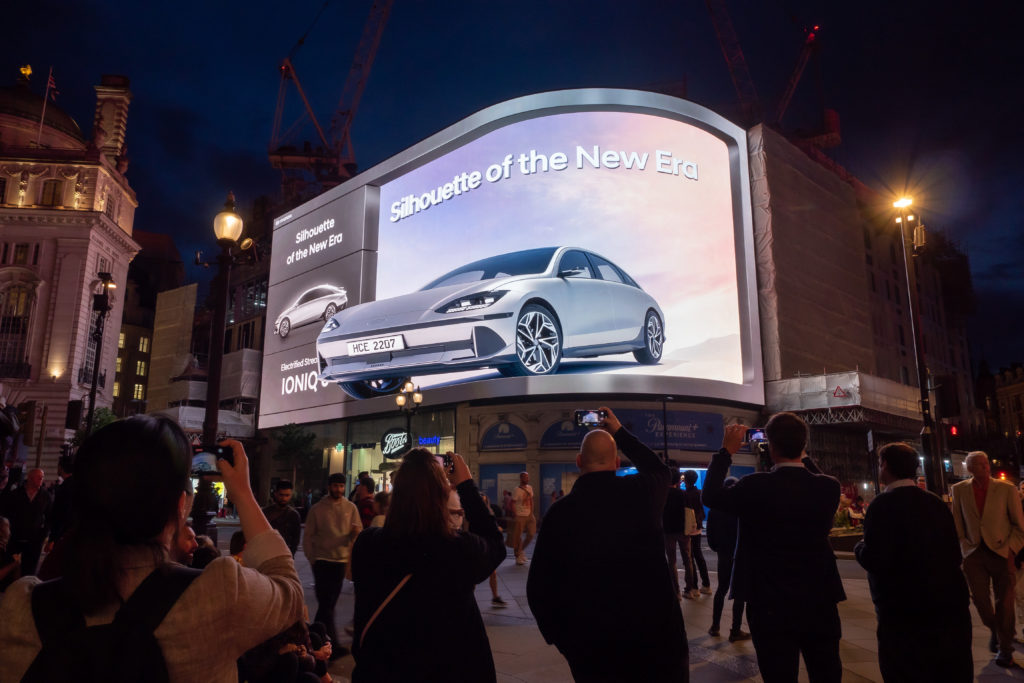 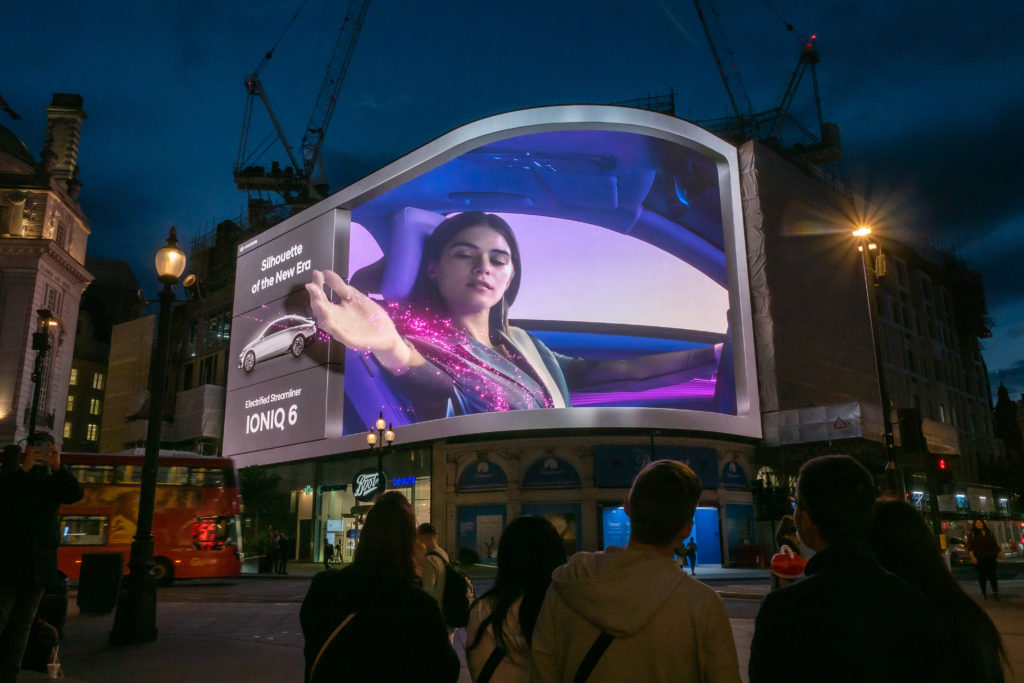 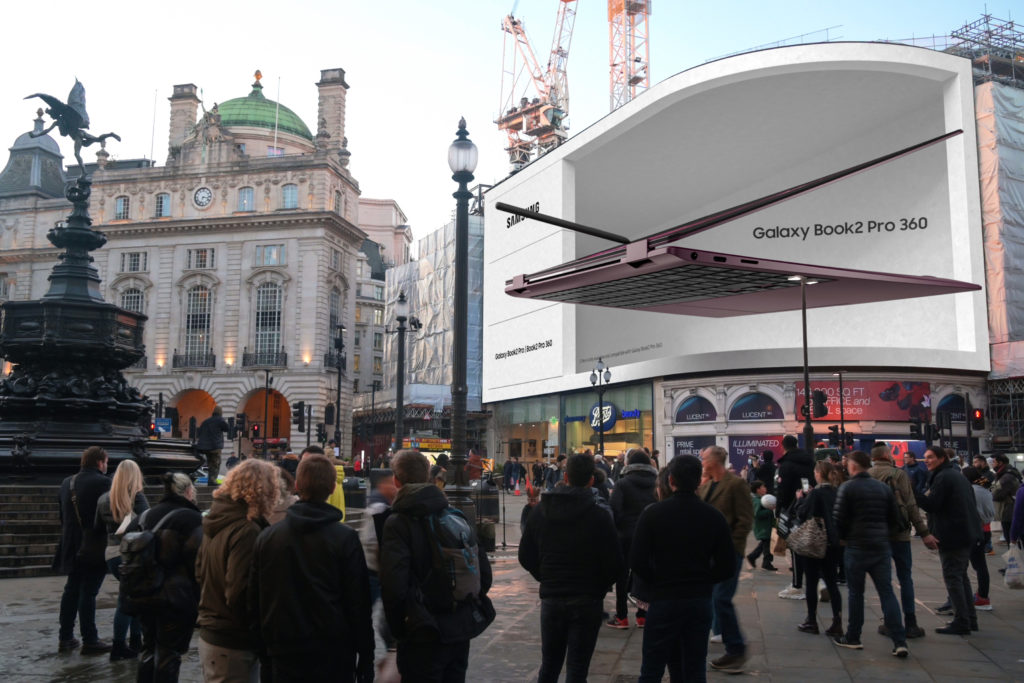 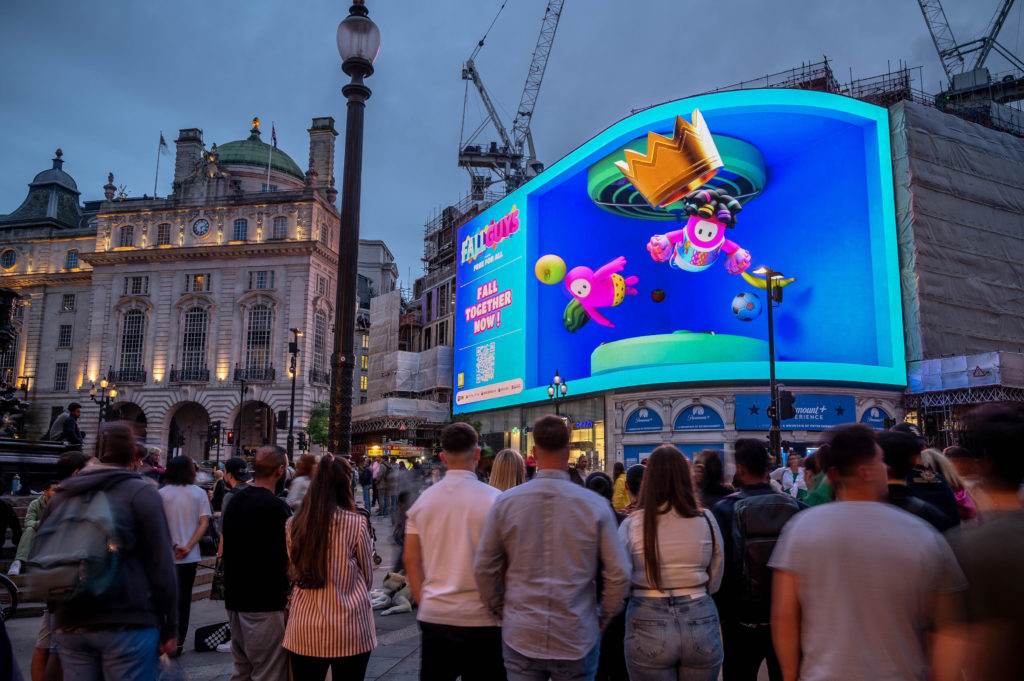 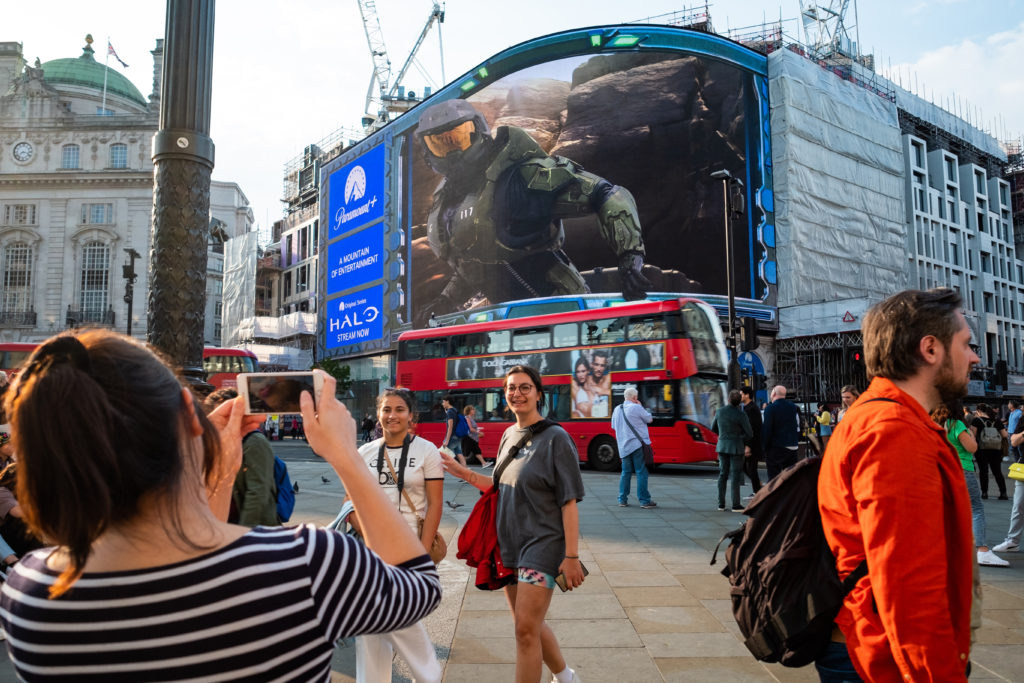 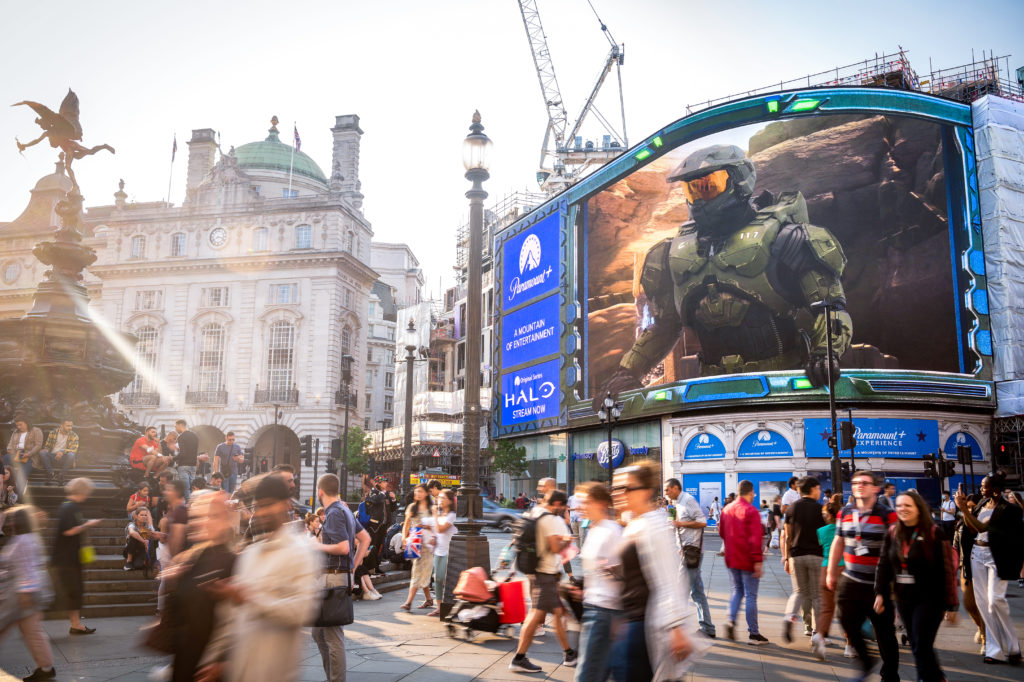 If there’s one thing that large format digital out of home delivers it’s entertainment. In spades.

And where better to sell the sizzle than the heart of our cities with their experiential spaces and outdoor audiences at scale. Prime real estate for summer takeovers.

Piccadilly pop-ups are quintessential DOOH and the knock-out success of Ocean’s DeepScreen™ technique reached fever pitch this week with no less than five of the six global brands currently on Piccadilly Lights using our 3D creative templates to wow audiences with some showstopping illusions.

Streaming service Paramount+ has joined forces with London’s West End with a series of installations which have immersed us all in the Halo show and dramatic 3D animation complete with dust and smoke.

Then came Fall Guys, the multiplayer game from Epic Games which battles up to 60 players across increasingly absurd obstacles and  levels. Season one’s Free For All came with a special Piccadilly 3D blunderdome and some real life jelly bean chaos. Selfie heaven.

Silhouette of a new era

From crazy to cool, long term Piccadilly partner Hyundai used DeepScreen™ for the first time this week to unveil the Ioniq 6 design. A prototype of the modern, sleek all-electric sedan made its debut in 3D digital design on the Piccadilly Lights which was then shared by Hyundai on its social channels.

Apparently we will have to wait until its world premiere next month to know the full specifications.

Another long term Piccadilly resident Samsung is using its Piccadilly slot to showcase its stylish Galaxy Book Pro 2 Series in another futuristic display. It’s Samsung’s first ever 3D execution for Galaxy Book worldwide and shows off the flexibility and versatility at the heart of the Samsung brand.

Where better to end Piccadilly’s 3D bonanza than at Wimbledon. Vodafone, the Official Connectivity Partner of The Championships, Wimbledon, has unveiled an industry-first 3D Piccadilly Lights activation which sees British tennis sensation Emma Raducanu brought to life as a digital avatar.

The multi-screen immersive experience, inspired by Wimbledon Uncovered in 360, Powered by Vodafone, is the first ever motion-capture computer generated (CG) avatar of an athlete to appear solo in DeepScreen™ on the Piccadilly Lights. Complete with giant yellow tennis ball.

Last year, when we first launched DeepScreen™, it was rugby balls and giant avatars as part of Vodafone’s partnership with the British Lions tour.

As Maria Koutsoudakis, head of brand, Vodafone UK, says: “This summer we set out to help the UK #FeelTheConnection in partnership with some of Britain’s most loved events and using iconic sites like Piccadilly to bring this experience in 3D to life, is a key part of our strategy. The opportunity to take a quintessentially British brand like Wimbledon, the power of Vodafone’s connectivity with Wimbledon Uncovered in 360, and a British star like Emma to such a recognisable
site is a big brand moment and one we’re immensely proud of.”

When we launched DeepScreen™ we weren’t totally sure that advertisers would see the potential. If they would embrace it. A few commentators suggested it was a flash in the pan. But we knew we had something special and in a relatively short period, DeepScreen™ has become THE playground for entertainment, high fashion and sport in particular, not just in the UK, but right across the Ocean DOOH estate in the Nordics and the Netherlands too.

And with a further three global brands planning new DeepScreen™ activations coming this month, the sheer volume of imaginative executions demonstrates the adoption and evolution of the technique.

As with all advertising, visual trickery alone won’t necessarily cut through or achieve wider marketing goals. The creative has to be well-considered and the message right. However, the agencies we speak to tell us that if done right, 3D draws a huge online audience. If the creative is surprising, cool or outlandish, it’s likely to be shared on social media. Those savvy brands who capitalise on that will get a solid return on investment.

And remember. With the launch of Ocean’s 2022 Digital Creative Competition just around the corner, all you need is an idea. Why not make it in 3D? Then we will do the rest.

To find out more about DeepScreen™ please get in touch.