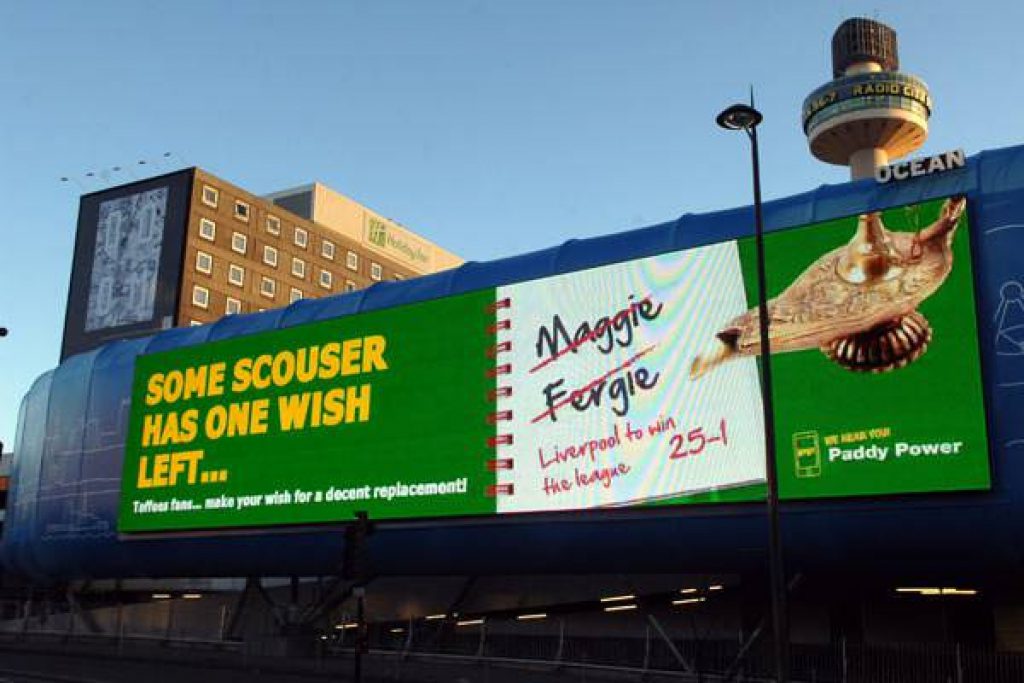 Tongue in cheek betting company Paddy Power used a tactical campaign on Ocean’s Liverpool Media Wall to hint Scousers may only have one wish left… winning the Premier League. With the announcement of Alex Ferguson’s retirement as Manchester United manager coming shortly after the departure of former Prime Minister Margaret Thatcher, Paddy Power has had some fun by hinting it’s a good year to be a Scouser. The betting company who turned around digital creative within days suggested that a Liverpudlian only has one wish remaining… the Reds winning the Premier League!

This is a brilliant example of an outdoor tactical campaign with Paddy Power ONLY using the newly upgraded Liverpool Media Wall as it is the largest commercial full motion digital screen in Europe, located opposite to Liverpool Lime Street station.

The campaign had a huge reaction on social networking sites, resulting in 6,562 likes and 2,779 shares of the campaign on the brands official Facebook page, which has 909k likes in total. Alongside Facebook, Paddy Power’s official UK Twitter feed also posted the image of the campaign to its 156,539 followers. The tweet was then retweeted 1,034 times further demonstrating the power of outdoor and social media combined.

The campaign was so successful that Paddy Power is planning to release similar tactical campaigns on other digital sites in Manchester.

Here’s the billboard we’ve put up outside Lime Street Station in Liverpool that everyone is talking about… twitter.com/paddypower/sta…

This is absolutely brilliant from @paddypower! Another quality billboard #lfc

Paddy Power are amazing at pushing the boundaries blog.paddypower.com/2013/05/09/pad…

Paddy power billboard in Liverpool, banter at its finest ⚽⚽⚽ twitter.com/OllieOCall/sta…