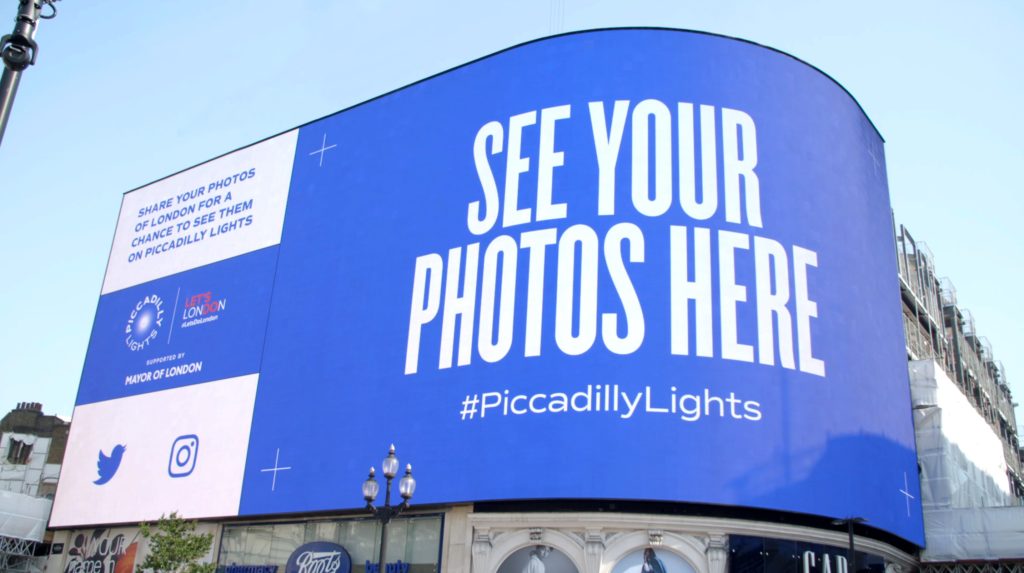 Piccadilly Lights, the most famous advertising board in the world, is celebrating the city reopening by giving Londoners the chance to see their own photographs of the capital illuminated on the iconic screen.

As part of the Mayor of London’s Let’s Do London campaign, the biggest domestic tourism drive the capital has ever seen, Piccadilly Lights are inviting the public to capture their favourite London scenes and share via social media using #PiccadillyLights.

The best photos will be shown on the big screen, giving some Londoners a unique 1.5 seconds of fame on one of the country’s most spectacular landmarks.

By inviting Londoners to share images of their favourite sights and places, Piccadilly Lights will curate a 360-view of the real London; capturing the vibrancy and diversity of city, reminding Londoners what they love about the city, and showcasing hidden gems to visitors.

The images submitted by the public will be captured in short films which will be screened on Piccadilly Lights. As part of the historic fabric of London, it’s a fitting campaign for Piccadilly Lights and delivers on its promise to spread positivity and solidarity through the capital – and the nation.

The Mayor of London, Sadiq Khan, said: “As London continues to recover and rebuild from the pandemic, I am thrilled that Landsec and Piccadilly Lights have chosen to support our Let’s Do London campaign. This unique way of showcasing London’s famous sights and hidden gems, all through images created by the public, will inspire Londoners and visitors alike to get back out there and enjoy all the capital has to offer. One of London’s greatest strengths is our diversity and I am looking forward to seeing this displayed on the most iconic advertising billboard in the world.”

Derek Manns, commercial media director, Piccadilly Lights: said “Let’s Do London is such an important initiative for the city. It felt only right that such an iconic symbol of London be part of it. An empty Piccadilly Circus was a symbol of locked down Britain when the pandemic first hit. Over the past year Piccadilly Lights became a symbol of hope and positivity through art, charity and public service broadcasting. Now, as we turn a corner and the city starts to open up again, we hope that it can once again represent the vibrant beating heart of London.”

The Mayor has allocated £6 million to directly support the new campaign, in addition to industry contributing over £1 million in funding and value-in-kind. The campaign will include a major advertising push supported by London & Partners and TfL, alongside new content on the Visit London website outlining all the campaign has to offer to Londoners and visitors to the capital. It will include a new TfL campaign launching next month, involving TV and poster advertising, that will encourage people to rediscover London by public transport.

To ensure London re-opens safely, the capital’s venues are doing a huge amount of work to ensure they follow COVID guidance – including new queuing systems, staggered arrival times, and a variety of social distancing measures. The Mayor continues to urge Londoners to show caution and follow the rules when out and about, wearing a face covering in shops and other indoor venues, carrying hand sanitiser, and keeping to social distancing. He also continues to urge Londoners to take up the vaccine as soon as they are offered it.